Post #47
For this year, I'm reviewing Twisted Sister's "A Twisted Christmas" for the Holidays. 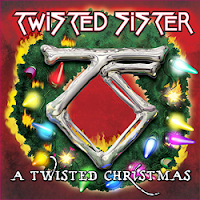 I first saw this CD while shopping the after-Christmas sales last year. It was 60% off in the holiday music section at Target. My first thought was, "Twisted Sister recorded a holiday album, this is nuts!" However, being a fan of Heavy Metal music as I am, I couldn't pass up this CD for such a great price.

This album, recorded in '06 (after their last "reunion" tour) is quite a curious effort from this band of 80's hair-metal pioneers. I must admit upon listening to it for the first time I laughed out loud practically through the whole thing. Truth be told, this is probably half the intent of this recording. However, for any heavy-metal fan looking for a Christmas CD beyond the catalogue of Trans-Siberian Orchestra, this might be worth checking out.

The CD starts off with a soft sounding, acoustic guitar and trumpet (poorly-played, but it turns out to be in jest) version of "Have Yourself a Merry Little Christmas". The band breaks off in mid-melody for a 'dramatic' dispute of song-stlye. They proceed to re-start the song, but playing it TWISTED!!! (i.e. with full TS distorted guitar and power-chords), and just before the final verse they step it up even more with a double-time tempo. In spite of the rough edge to their sound, TS manage to pull off some catchy interpretations of some holiday classics on this CD. My favorite moment has to be "Oh Come All Ye Faithful", which is nothing more than "We're Not Gonna Take It" with the lyrics from "Oh Come All Ye Faithful" sung to the beat of the Hair-Metal anthem.... You have to hear it to believe it, but they fit the song's melody surprisingly well!

The rest of the album will continue to surprise you with its catchiness, while you laugh at the stylistic clash in the same breath. You have to give Twisted Sister credit for having a sense of humor about themslves enough to tackle a project like this, and never stray from their trademark sound throughout.

My recommended songs:
-Have Yourself a Merry Little Christmas
-Oh Come All Ye Faithful
-Silver Bells
-Deck The Halls (the melody of "God Rest Ye Merry Gentlemen" is thrown into this song during a "breakdown" segment)
-Heavy Metal Christmas (this is "The 12 Days of Christmas" with TS's unique, and somewhat cliche, alternate choice of lyrics)
Posted by headbanger_71369 at 11:07 PM No comments:

Post #46
When I first saw this CD while I was browsing, I thought, "Another collection of demos?!?"-it seems that many bands from the 80's-90's are dredging up their dusty demos and putting them on a CD just to have something new on the market. However after purchasing this CD of demos, I'm likely to raise my standards when it comes to demo recordings...

The first detail that caught my eye with this demo recording was the fact that it included several previously unreleased songs- always a plus in my book. Plus I'm a huge fan of Rob Halford- either with Judas Priest or his solo material. I think he has one of the greatest voices in heavy metal.

The liner notes are great, too. They tell the story of how Rob set out on his first solo project after leaving Judas Priest. In his own words, Halford tells you his vision of what he wanted from the first Fight album. He held the project so close to his heart that he insisted on keeping his own copy of the original demos, and that is more or less what K5 is.

As this CD began to play I was instantly impressed with the sound quality. The opening track, "Into the Pit", kicks off with an ascending drum beat that quickly explodes into the feast of metal riffage that Fight were known for. The next few tracks on the CD follow suit. At times it seems as though Rob is in the room right next to you wailing his lungs out. You can hear the echos and a bit of feedback from the amps in a couple places. The vocals are sometimes easier to make out compared to the refined studio album, but in other cases more difficult -it depends on the effects employed in the particular song. It is unrefined qualities like these that make a recording of demos worth listening to.


Experiencing these songs as Halford originally intended them is a truly unique experience. I also dug out the original "War of Words" album from '93 and listened to it again to get a good comparison. There are a few songs on the original recording that are absent from the demos. Perhaps these were composed later on, or maybe written primarily by a collaborator. Whatever the reason, it means you have to hear both versions of this album to get the full experience!

Looking back at this period of Halford's career, it seems he was creating a tougher sounding kind of metal, coinciding with the rise of Pantera's international success, whose influence may be apparent in Fight's material. If you're a fan of the "Painkiller" Judas Priest album, you should enjoy Fight's music (Halford brought Priest drummer Scott Travis along with him into the "Fight" club). However you look at it, K5 provides a new perspective on this segment of Rob Halford's recording career.

In recommending songs, I'll make notes after each song as to which version I prefer. In the end I must say that both versions should be considered "essential" for fans of "The Metal God"... 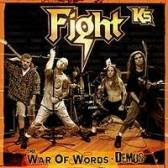 From K5-The War Of Words Demos ('08)
-Into The Pit*
-Nailed to the Gun*
-Now You Die (exclusively on this version)
-Beast Denies (this is an early version of the song that became "Reality: A New Beginning". The lyrics are completely different, but my favorite part is the clean-guitar breakdown segment that was cut from the final version of this song.)
-Psycho Suicide (this was originally found as a hidden track on "A Small Deadly Space"- Fight's 2nd full-length album.)
-War of Words
-Down (exclusively on this version)
-Laid to Rest
-For All Eternity* 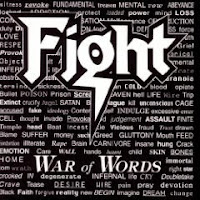 From War Of Words (original '93)
-Into The Pit
-Nailed to the Gun
-Immortal Sin (exclusively on this version)
-Little Crazy (exclusively on this version)
-War of Words*
-Laid to Rest*
-For All Eternity
-Reality: A New Beginning* (of all the songs I'm recommending in this post, this one is my #1 suggestion. In fact, it is one of my favorite heavy metal songs of all-time!)