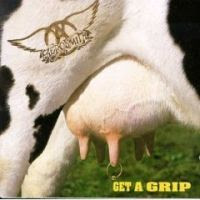 In the midst of the wave of alternative-rock and grunge, Aerosmith came out with another great rock album, Get A Grip. This album featured several hit singles, most accompanied by successful MTV videos (some of which featured vocalist Steven Tyler's daughter Liv). The band seemed to carry the momentum of their last two albums, Permanent Vacation & Pump, with much consistency throughout this album.

In comparing Get A Grip with anything the band has recorded since, you (faithful readers of this blog) have decided that this one is the best. Still, I hope you all continue to follow Aerosmith and keep up with their new material as it comes out. I find them to be a very consistent band, and full of energy and the will to rock. Their longevity should serve as a testament to the world of hard-rock music that some things can still get better with age.

My recommended tracks from Get A Grip:
-Eat the Rich
-Fever
-Livin' On The Edge
-Cryin'
-Amazing (this song has alot of biographic lyrics, inspired by the band's history...)
Posted by headbanger_71369 at 3:30 PM No comments:

Post #55
Hello readers, one and all!
Just checking in to let you know I have the next 3-4 months of reader's polls plotted out in my head. This should get me through late-summer before I need to think up some new poll topics.

For next month's poll I'm going to choose a couple of my "coming soon" topics that have been sitting on that list for too long, see which one you all are most interested in, get off my lazy butt, and actually write it! Following that I have a series of polls in mind pertaining to Iconic heavy metal bands during the 80's, so get ready to ponder some old-school metal!

After that, I'm not sure where I'll go, but I'm always getting ideas! As always, I'm open to suggestions, so feel free to post your thoughts in a comment on any post, or if you see me in person somewhere, just let me know... 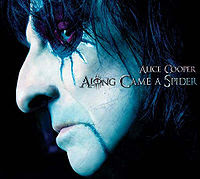 Along Came a Spider is Alice Cooper's 25th studio album (I think), and this time Cooper fleshes out a concise story of a spider-themed serial killer. You get to hear much of the story from the psychopath's perspective, and it creeps you out like old-school Alice used to do.

Stylistically, the music follows Cooper's recent trend of retro-rock as he continues to stick to a more stripped-down, classic rock feel like he utilized on The Eyes of Alice Cooper & Dirty Diamonds. This fits Alice well, although part of me misses his heavier sound he employed on the Brutal Planet & Dragontown albums. For the most part, much of this album sounds right at home with some of his mid-70's material.


As for Along Came A Spider, this is a pretty cool concept album. There's a clear plot, and the songs develop it well. There's also a prologue and epilogue that sort of set the context of the story, so there are no loose threads, or strands of silk if you'd rather... Long time fans of Alice may also recognize the main character of Steven from some of Alice Cooper's previous material. Basically, if you enjoyed either of Alice Cooper's last 2 albums, you should like this one too. Just be prepared for a twisted and haunting tale!

Here are my recommended tracks:
-Vengeance Is Mine
-Catch Me If You Can (this track contains a lot of the story's plot development)
-Killed By Love (this is the token ballad on this album, but again it fits in with the album's theme- although it may sound pretty, if you catch the lyrics you'll find it just as dark & twisted as the rest of the album)
-I Am The Spider/Epilogue
Posted by headbanger_71369 at 1:26 PM No comments: