Fist to the Sky are a metalcore band from the suburbs of Chicago. At HappyHeadbanger Fest they'll be performing an acoustic set. A former 'Independent Band of the Year' from the 2012 contest, you can see my previous reviews of their music here.

Check out their official video for 'Another Lesson Learned'

Threatening The Order are a female fronted heavy metal band, and graciously will be part of the festivities at Happyheadbanger Fest at Elbo Room in Chicago on September 3rd.Their sound is a bit comparable to the likes of Halestorm or Lacuna Coil, but a bit heavier.

Check out their song 'Hold Your Breath' here on their Facebook page.

Other songs available to stream on their Reverbnation Page.

Happyheadbanger Fest is rapidly approaching. On Saturday September 3rd, the Elbo Room in Chicago will host this brand new music fest. The bands in this line-up represent a wide range of the rock-metal spectrum. From indie-rock, to melodic metal, to extreme metal, Happyheadbanger Fest will feature a little of everything.

Here is a preview of MEDIUMS, the newest band added to the line-up. They're a melodic indie-rock band that are comparable to such acts as Ben Folds or Lucky Boys Confusion. This is from their debut performance "Only in Moonlight".


Follow MEDIUMS on Facebook.
Get your tickets for HappyHeadbanger Fest at the Elbo Room event page!
Posted by headbanger_71369 at 12:22 AM No comments:

Suffer No Fools-Songs for the Restless Youth (2015)

Suffer No Fools are a heavy metal band from Ealing, England (a borough of London). Fusing elements of melodic metalcore and classic heavy metal from thrash to NWOBHM, they offer a pure metal structure and deliver on headbanging riffs as well as shredding solos and a vocal style that has both aggression and hooks. 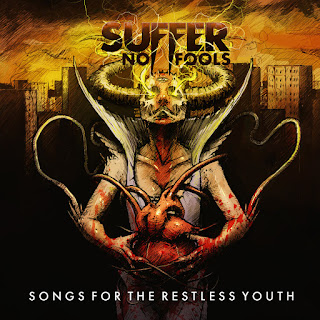 Songs for the Restless Youth is their debut album, however it could double as their mission statement! They write lyrics that frequently address current socioeconomic issues of today's youth. Their strength is in mid-tempo, heavy groove songs with  a hard-edged vocal delivery. They remind me at times of Avenged Sevenfold's sound on the 'Hail to the King' album, but other times are comparable to the melodic side of All That Remains. In any case you're in for some catchy and heavy songs that display both an innate talent and a social consciousness.

You can stream or download Songs for the Restless Youth at the Suffer No Fools Bandcamp page. Follow them on facebook for their schedule of shows in the greater London area, as well as updates on any new material they may be working on.

Recommended Tracks:
-The Bombing Campaign
-Prey
-Forgiven or Forgotten
-Abyss
-Dirge of the Old Gods
Posted by headbanger_71369 at 8:33 PM No comments:

A rock and metal music fest that will primarily feature the independent bands featured here on this blog for the past seven years... HappyHeadbanger Fest will be sure to satiate every Chicago metal-head's need for headbanging! Featuring 3 previous winners of my 'Independent Band of the Year' annual contest, plus members from other previously featured bands, and a couple bands to be featured in this year's upcoming Independent Band of the Year Reader's Poll, this fest is as much about promoting the Chicago and surrounding area's music scene as it is about that scene supporting this blog in return.

In just under 3 weeks, Scars of Armageddon, the current Band of the Year, will be performing, along with previous Bands of the Year Her Name Is Mercy and Fist To The Sky. Other bands performing include Threatening The Order, Mediums, and Proudest Angel!

6 Independent Metal and Punk Rock bands! Fully Amped and Unplugged sets on 2 stages! MC'd by the Happy Headbanger Himself! This brand new music fest will have something for everyone...

HappyHeadbanger Fest will be at Elbo Room in Chicago on September 3rd at 8pm (doors open at 7pm). Tickets are $9.00 in advance through the Elbo Room's Ticket page, or direct from them bands if you're following them. Tickets will be $10 at the door. 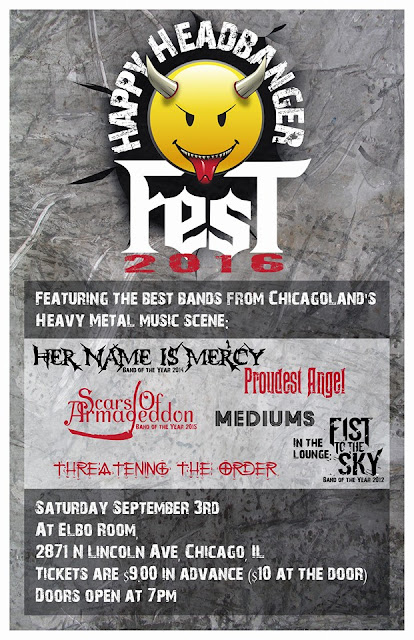 (Recent Update: Due to unforseen circumstances there has been a change in this line-up. Mediums has replaced Evil Engine for HappyHeadbanger Fest 2016.)
Posted by headbanger_71369 at 1:46 PM No comments: