Imminent Sonic Destruction, from Detroit, MI are like the 2nd coming of Dream Theater. There are some specific examples of similarities you can directly compare, but as is the case with any new band, they forge their own unique elements into those they take from their influences. Beyond that first impression of mine, they do seem to be true disciples of prog rock and prog metal as their name is a direct inspiration from the progressive space-rock band Hawkwind. It is just with their heavy tonality, and balanced instrumentation, Dream Theater is the most accurate comparison that comes to mind... 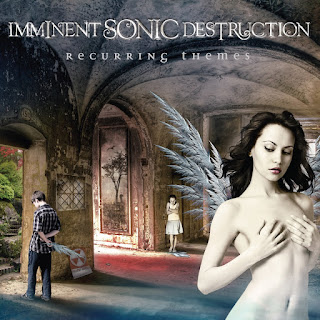 Recurring Themes is a full-length album (it's hard not to be when they employ such an accomplished prog-metal style!) that is packed with technical prowess, grand ambition, spectacular musicianship, and jaw-dropping execution. Although a self-released title, they did catch the ear of famous metal producer Roy Z (whom has produced albums for the likes of Rob Halford and Bruce Dickinson), and he offered to produce this album.

The opening song, 'Driving Home' features heavy guitars, synthesizers, and elegant guitar solos. It clocks in at just over 10 minutes and instantly gives you a heavy dose of this band's abilities. Fans of Dream Theater (like myself) will find them to be a promising young talent with a bright and promising future.

Another track, 'With Death This Story Ends', gives you a bit of something new, as it incorporates a subtle amount of hardcore screaming in the vocal palate. At first it is a slower, subdued song, with a mild tempo primarily driven by bass and drums. Overall the vocals are still primarily melodic, it is just that we hear their potential for the harder edge after a transition towards the end of the song. In this day and age almost any serious metal band will use some degree of hardcore vocals. Imminent Sonic Destruction are no different, and they can do so as well as anybody, they just choose to use it sparingly.

Describing their style as "progressive super metal" is no understatement, and neither are the comparissons to Dream Theater! It takes a lot to reach that level of musicianship, and it is not a comparisson to make lightly. They can compose and execute compositions of epic length with professional scope and vision. no less than 3 of this album's tracks break the 10 minute mark. 'Raven', the longest of them all, clocks iin at 16:36, and closes the album in stellar fashion.

Another favorite track I want to highlight is 'Here, It's Over'. This one has a dark, melodic intro that feels like it's building to something. The bridges and choruses are heavy thrash metal segments, while the verses revert to the melodic minor-key vibe of the intro. The lyrics depict a personal relationship: a life built together that is slowly disintegrating. Vocally, there are hardcore screams that come into play when the emotions intensify.

So if any of you are a Dream Theater fan wondering when another band might come along to follow their footsteps, or carry that style of metal into the next generation, wait no longer. That band has arrived, and their name is Imminent Sonic Destruction!

Though this release has been out for a couple years already, they are still touring in support of it. As a matter of fact, ISD are opening for Fates Warning on their North American Tour this fall!

Visit their facebook page for more details and updates...