Post #104 Poll Winner: Favorite Alice Cooper album from the 70's.
The 1970's were a formative era for the genre of heavy metal. Several hard rock bands from this time would become primary influences for almost every heavy metal band that has folowed since. This was a time of pioneers. Rock musicians who began making music in the late 60's would slowly begin to emerge from the haze of psychadelic rock and hone in on other elements of style. One such artist would be Alice Cooper.

Alice Cooper became famous early in their career for the theatrical elements of their stage show. Hence, Alice became known as the founder of 'Shock-Rock' (dubbed for the shocking elements of their music and performance). At about the same time, the band started producing some genuine hit songs that helped define the generation. 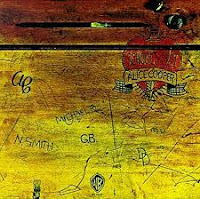 School's Out is perhaps the best example of Alice Cooper's rock-anthem capabilities. To this day the title track to this classic album is cranked up to 10 for many high-schoolers during summer break. This song gave a generation of teenagers a rally cry in the 70's.

On the local, independent rock music scene in Chicago, there has been a series of 'Battle of the Bands' style shows this summer. One band featured in this competition has been on my radar for a while now: Sutured Psyche. On Friday, July 23rd I was finally able to make it to one of their shows, and it was well worth the wait.

As part of the Independent Arts & Music Fest (I AM Fest), they played a show at the Elbo Room on Lincoln Avenue in Chicago. It was a small venue, in the basement below the bar, and a little short on air-conditioning. All things considered, the crowd was still ready to rock, and with potent enthusiasm. The crowd seemed to be perpetually revolving, as people kept retreating to the upstairs area where the AC was working much better. There also seemed to be a trend of each band pulling in its own crowd that didn't always stick around for the whole evening.

For those who stuck it out for the penultimate band, Sutured Psyche, they were rewarded with a great set of in-you-face hard-rock music! As the individual members ran a final sound-check with the venue sound-staff I was getting psyched (pun intended!) Suddenly, it was SHOW TIME!

They hit the ground running, opening their set with "Clarity", a song that quickly showcased much of the band's signature sound. Hard rock riffs are the driving force behind Sutured Psyche's music. Catchy melodies are abundant throughout as well. Clean-guitar progressions balance a heavy rhythm guitar as a tight drum & bass guitar combo holds everything together. However, the most unique element of this band may be their lead vocalist. Singer William Pekoc IV has a deep, throaty voice that reverberates throughout the room. This facet of the band's formula is the reason behind a few hinted comparisons to Tool. 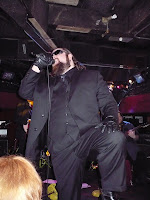 Pekoc's commanding vocal delivery, along with the band's slick image (dressed in matching black suits-at least at the start of the show), and stage craft make for a highly entertaining rock show. Follow this band with their myspace page: http://www.myspace.com/suturedpsyche, and try to catch one of their shows on Chicago's north-side. You won't be dissapointed.

For now I'll leave you with the set list from this show: 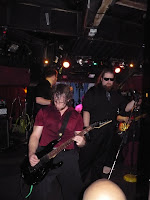 Luck of the Draw

Much More Than I've Lost

Inherit the Earth (A great fist-pumping anthem, with crowd-participation opportunities!)
Trickster
The Leap (this one has quickly become a favorite track of mine, having sampled it frequently on their myspace webpage)
Teen Angst (a rare cover-originally by Cracker)
Anything
[Sutured Psyche will also be featured soon in this blog's 2nd annual Myspace/Independent bands' reader's poll. Coming feature in October this year...]
Posted by headbanger_71369 at 7:59 AM No comments: