On Thursday July 17th I made a trip up to Oshkosh , WI to enjoy what Rock USA Fest had to offer. The line-up for this summer was packed with a versatile line-up of bands ranging from mainstream radio-friendly melodic rock bands like 3 Doors Down and Seether to more extreme metal acts like Megadeth and Slayer.

Unfortunately I was unable to attend the first day of this fest, but I made it for the 2nd. I was in for a treat as this evening's headliners were Megadeth followed by Rob Zombie! This would be the 4th or 5th time I've seen Megadeth, but my first time to see Rob Zombie. I was curious to see what they each would play in their concert set-list. With such a diversity of bands, and the festival format leaving each band with the same amount of performance time (1 hour) I was expecting sets focused on the bands' big hits and fan favorites. I wasn't far off.

Megadeth's set was during sunset hours; they went on at dusk, and played until just after dark. Overall Megadeth didn't play anything much different from what I've seen them play before. Again, this was more likely due to the limited set-time and the desire to appeal to a crowd that may not know more than their hits anyway. They included their biggest classics: Hangar 18, Peace Sells, Trust, and Symphony of Destruction. The one thing that I found entertaining and was a new element I had not seen them do before, is every few songs they would play a clip from a movie between songs. The movie clip always referenced the music of Megadeth. I did not recognize all the movies from which they sampled, but I know one was from one of the Wayne's World films. The one song that was new for me was from their newest album Super Collider, as they performed 'Kingmaker'

Rob Zombie was a different experience for me. I would not call Rob Zombie my favorite band or performer, or even in my top 5, top 10, top 25, or even top 50. I enjoy live music for the raw quality of it; hard-working musicians playing their instruments purely for our entertainment as fans- not as much as when the performance is mixed with a playback of recorded effects and artificial musical elements. I also enjoy hearing a band perform their original works (more than I do cover-songs, although a good cover is often worth hearing, so long as an original band doesn't go overboard on the covers.) Now, in spite of Rob Zombie being guilty of most of these shortcomings from my personal perspective, I do have to say that he did win me over with his performance! Equal credit should be given to his lead guitarist, John 5. John 5 performed an 8-minute guitar solo prior to their encore that I would honestly say was the best concert guitar solo I've witnessed since the last time I saw Eddie Van Halen... in 1998!

In spite of the crowd's inability to express their fanaticism kinetically for the music (due largely to the seating format which included row upon row of plastic lawn chairs the went right up to the stage), Rob still gave a top-notch performance as a front man, and delivered all his best-known songs (Dragula, More Human Than Human, Living Dead Girl), and several good covers (Alice Cooper's 'School's Out', Grand Funk's 'We're an American Band', and to my enthusiastic surprise, Diamond Head's metal classic 'Am I Evil?'). He even outdid himself, by virtue of being the night's headliner, by over-playing his set time by about 30 minutes. He prefaced his closing number by saying: "So we're only allowed to play until midnight... ... so we have one more song. Don't worry though, it's a 20-minute song."

In closing I will say that although Rob Zombie may not be among my favorite bands, he is certainly a formidable live performer. I will watch for him on tour in the future, and I will see him again if opportunity presents itself. I would recommend seeing Rob Zombie live in concert to even his most fair-weather of fans.

Even though I arrived too late for the performances of Hellyeah and All That Remains, I will include their setlists below for reference. I found them online at setlist.fm - an excellent, fan-contributed and edited website for documenting live performances. I would recommend this site to any concert-goer.

ALL THAT REMAINS
-The Air That I Breathe
-Now Let Them Tremble
-...For We Are Many
-Some of the People, All of the Time
-What if I was Nothing?
-Asking Too Much
-Six
-Down Through the Ages
-Hold On
-The Last Time
-This Darkened Heart
-Two Weeks

Programmable Animal are an industrial/metal band from Chicago. Recently they released their first full-length recording: Drepsea. This album is a well-executed project from start to finish. For an independently recorded album, it delivers its intended message with tremendous focus, execution and production.

Drepsea: the dark feeling of depression and despair that we all struggle against from time to time. A metaphorical 'sea of depression', or an antagonist of this album's concept and theme. 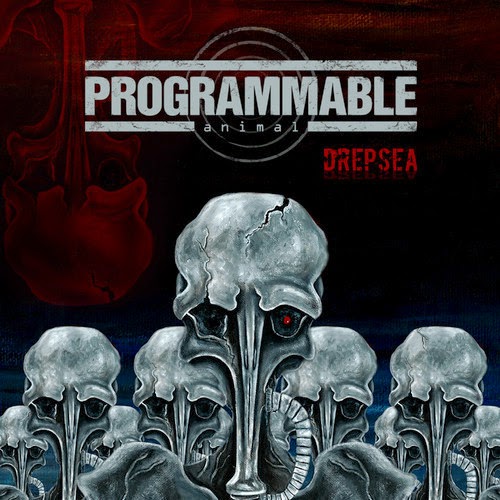 Programmable Animal quickly establish their solid formula of industrial, melodic metal as Drepsea begins to unfold. An ambiance is built primarily through keyboards and synthesized guitars. Distorted guitar parts are more of a rhythmic element; more deep in the mix along with drums and bass- it's the vocals and electronic components that create the melody and top layers of Programmable Animal's music. The bass line often drives the chord progression as the songs' themes develop.

Drepsea could also be considered a concept album. The aforementioned dark moods created by their sounds and lyrics tell tales of wallowing in the mire of society's numerous obstacles to the common pursuit of happiness. This collection of songs is intended to help those struggling with these or similar feelings to persevere through the dark times and see the proverbial light at the end of the tunnel, or to rise up out of the Drepsea and sail onward.

Programmable Animal definitely deliver a Nine Inch Nails style of industrial metal. Dark moods, essential to the album's concept, are brought to a haunting light by the vocal performance, often enhanced with a scratchy effect. But they do more than just show an influence from NIN, and create their own polished product with a unique message for us all.

Recommended Tracks from Drepsea:
-Together
-Within (this one displays the softer side of Programmable Animal)
-Fall Eye (More ambient, and subdued. With the vocal style I am reminded a bit of Pink Floyd on this one.)
-Dark (This is the heavier sampling from this album.)
-Sea of Drepsea (High intensity of the synthetic instrumentation on this track. A faster tempo helps to lift your spirit, and begin to rise out of the Drepsea)

Psychopathic Daze will be road warriors again for the month of July this summer. Check them out at any of their numerous dates below. Playing venues across 3 states, they are spreading their influence further throughout the midwest... 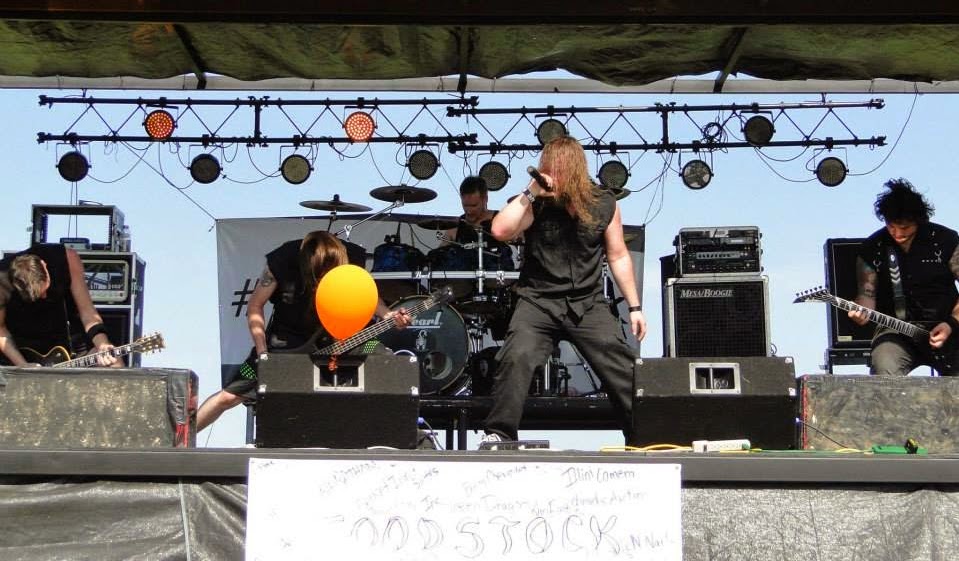 TONIGHT!! Friday, July 11th: They are playing in Marion, IN at Beatniks Cafe, show starts at 8pm.

TOMORROW!! Saturday, July 12th: in Elwood, IN, at Backstage Bar at 8pm.

Next Thursday, July 17th they play at Club Mambo, part of the Battle For Mayhem Fest, in Chicago, IL at 4pm.

Next Saturday the 19th, they play Chicago's Elbo Room at 6pm.

Then, for the last weekend of July they travel up to Wisconsin for a pair of shows:

Friday the 25th in Janesville, WI at The Back Bar at 8pm.

and Saturday the 26th in Oshkosh, WI at The Reptile Palace at 8pm.

Get out, check them out and bang your head to some hardcore metal!!!

Wicked Deception are an underground thrash metal band from Joliet, IL. Their goal when they started out as a band was to create an aggressive blend of death and thrash metal. After one listen to their first full-length album Incite the Riot, I must say mission accomplished!

Their throwback, raw and unrefined thrash tones remind me of the early works of Sepultura; from 1987's Schizophrenia to 1991's Arise. Incite the Riot writhes with that primordial intensity, aggression, and raw sounding tonality that is harder and harder to find in modern metal. Many of the earliest albums of thrash metal had this kind of sound to them. Wicked Deception take this potent foundation of riffs and add a death-metal inspired hardcore scream as their main vocal element, which is where I'm drawn to make the Sepultura comparison. 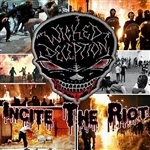 Brothers Lance and Brian Huguelet share the vocals, each adding their own unique elements. Lance does the mid-range screamed vocals and deeper guttural growls while Brian provides the straight forward hardcore screams. They switch off several times within songs, often with one brother singing the verses, the other the choruses.

The opening track, 'Retribution', dives straight into their signature sound. The raw, fast-tempo riffs assault your ears, while a deep-grooved and brutal rhythm is established by the drums and bass guitar. Raspy, mid-range screams from Brian Huguelet deliver the message aggressively with a Max Cavalera-esque style.

'Slavedog' slows things down a little in terms of tempo, but they keep the song's riffs heavy and aggressive all the same. They throw in a few spoken-word lyrics, which remind me a bit of Faith No More's Mike Patton. The song carries a theme of struggling for independence, and rebelling against authority.

'Unconscious Terror', again following the slower-but-heavy song structure, has one of the most memorable riffs on this album. They take a few seconds to include a technical and classic-thrash sounding guitar solo before this song ends.

The final track, '(No Life in Your) Darkness', features melodic guest vocals by Jennifer Skorniak. She sings melodically for most of the song, adding a diverse new element to Wicked Deception's pallet. Fear not though metal-heads, for she also can scream hardcore with the best of them, and adds this element at the choruses.

In conclusion I may be tempted to call Incite the Riot a 'melodic-death-metal' album, but that seems a bit short of accurate to me. What this style of metal really reminds me of is a time from metal's evolution when death-metal had not yet fully differentiated itself from thrash or speed-metal. All the comparisons I've made to early Sepultura were for a reason: this is the era of this band's primary inspiration. For anyone who ever loved the purest, most evil roots of what thrash metal was like in the old days, check out Wicked Deception. They are out to prove that some beasts never die...