Proudest Angel are headling the House of Blues, Chicago on March 29th. They want you to know about it and share it! From now through this Saturday, March 17th anybody that uses #proudestangel on social media will be entered into a drawing for 2 tickets to the show, 2 shirts and downloads of both their albums.

So jump onto your facebooks, instagrams, and twitters and spread the word for #proudestangel and their House of Blues show on March 29th!!!

Drive-Thru Metal meets Sci-Fi Metal? Count me IN!! On February 17th, 2018 I attended the weirdest tribute band show I ever saw. It was the "I Got a Bad Feeling About This" Tour with Mac Sabbath and Galactic Empire...

When it comes to tribute bands, I really appreciate true passion and talent in giving a nod to the artists that inspire you. But for a band to embody the passion of the music along with specific elements of a niche fandom, such as Star Wars, was truly something unique to behold!

Galactic Empire are that band. They have become internet-famous with their music videos, where they perform heavy metal versions of Star Wars soundtrack songs in full Star Wars costumes. They play the roles of Darth Vader, Death Trooper, Storm Trooper, Imperial Red and Boba Fett in the video. Not only that, but they insert fandom-themed jokes into the music videos also.

Seeing them perform live was every bit as entertaining as their youtube videos, if not more-so. They even had crowd participation, as someone from the audience was tapped to play the role of 'a Rebel Alliance traitor', and were then force-choked by Vader on stage. Since their first couple music videos, they have replaced Death Trooper with 'Kyle' Ren on guitar. During their live set they explained the line-up change, with plenty of dark-side humor! 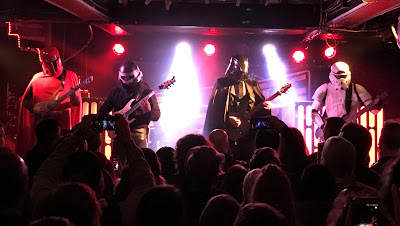 Galactic Empire's arrangements of the theme music from the Star Wars franchise are near flawless and satiate the metal-head's craving for well-executed riffs and guitar solos. This was, after all, a "fully armed and operational metal band!" As a Star Wars fan, and also owning my own copy of their full-length debut album, I knew every song and was immersed in metal-infused Star Wars fandom for the entirety of their set. The crowd's most energetic moment came when they played 'Cantina Band', of all numbers. If you haven't heard that one yet, find it on iTunes and treat yourself!

I forget the exact sequence, but I know they played:
-Main Theme
-The Force Theme
-The Forest Battle
-The Imperial March
-Cantina Band
-Duel of the Fates

Then it was time for Mac Sabbath. Their description alone says enough about them: A Black Sabbath Parody-Tribute band that mocks the food quality of the McDonald's franchise as well as the US FDA and food industry in general. 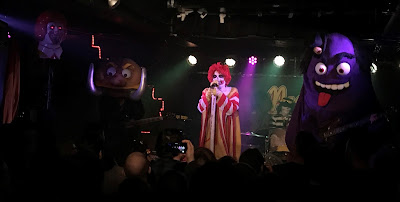 Mac Sabbath sometimes had a hard time taking themselves seriously, but the instrumentation and performance of the classic Black Sabbath riffs was worthy of any metal fan's respect! With the real Black Sabbath seemingly retired after their 'The End' tour, a chance to see any Sabbath tribute band is appreciated. This one was full of laughs as well. The music was well performed, and the lyrics were downright hysterical!

They do have a music video for 'Pair-a-Buns', but unfortunately most of their songs remain unrecorded in studio format. They do have a ton of youtube videos out there from various live performances that you can check out if you're curious, and have a strong stomach...

Since the show I've looked up the names of many of their parody songs, but the sequence may be off..
To the best of my knowledge, the setlist was:
-Black Sandwich (Black Sabbath)
-Organic Funeral (Electric Funeral)
-Chicken for the Slaves (Children of the Grave)
-GMO-Blind (Snow Blind)
-In Dreams (Roy Orbison cover?)
-SUPERSIZE!!! (Supernaut)
-Into the Void/Sabbath Bloody Sabbath/Megalomania  (Instrumental)
-Frying Pan (Iron Man)