With a new album on the horizon for 2020, it seems a good time to review this 'Best of' collection from King Diamond...

King Diamond (the singer/songwriter/front-man for this band of the same name) is a master of his own unique style of heavy metal music. This is the band he started after the break-up of his previous band, Mercyful Fate (also a key influence within the genre). The heavy guitars, numerous guitar solos, and fast-paced rhythm may be the trademark for the musical formula, best described as traditional, power, or classic heavy metal, but there is also so much more... King Diamond (the singer) is best known, in heavy metal culture, for his incredible vocal range: he possesses an incomparable falsetto that he blends with his middle and lower-registers within songs, often changing his singing style to match various characters' parts within the deeply thematic songs. This brings me to the next point that must be made about this music: King Diamond (the band) are equally famous for their ability to write cohesive concept albums. Practically every King Diamond album is a heavy metal rock-opera, telling a complete story with intriguing, and often demented, plots. Lyrically their music deals with concepts ranging from corruption, mental illness, demonic possession, exorcisms, and other themes of the occult. 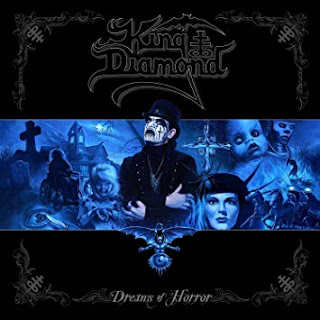 Dreams of Horror is further recommended for anyone with even a passing appreciation of, or curiosity for, the music of King Diamond for the following reasons.
-First, this collection was hand-picked by the band themselves. Each and every track is re-mastered to create a perfect listening experience. From the performers' own opinions, these are the essential songs that best represent a cross-section of the entire King Diamond catalog.

-Second, as a career retrospective this collection bridges the two labels (Roadrunner Records, and Metal Blade Records respectively) that have released the King Diamond albums over the past 30 years. Specifically, Disc One is subtitled 'The Roadrunner Years' and features songs from each of that label's 5 early releases from 1986-1990, while Disc Two is subtitled 'The Metal Blade Years' and thus features songs from each of that label's 7 releases, spanning 1995-2007.

-Third, with King Diamond (the band) now actively touring again, it is their intent to heavily feature these tracks in their set-lists on current and near-future tours.

So, whether you are a die-hard or casual fan, a newcomer to the music of this band, or a loyal long-time follower, THIS IS THE ESSENTIAL COLLECTION of King Diamond music.
Enjoy!


Recommended tracks:
Roadrunner Disc:
-Dressed in White
-The Family Ghost
-Black Horsemen
-The Invisible Guests
-The Eye of the Witch

Congratulations to Dear Deadly, the 2019 Independent Band of the Year! This year's reader's poll was competitive, and had several lead-changes during the polling period. It is also notable that it was the first time all 7 bands' vote totals reached double-digits. Dear Deadly took the lead about halfway through, and while other bands closed the gap, Dear Deadly managed to hang on to enough of a lead to finish in 1st place with 140 votes. Watch for a review of their music, promos for their live shows, and other content for the 2020 calendar year. 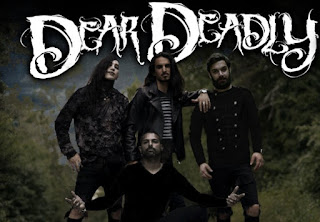 Thank you as well to all the other bands that made 2019 a memorable contest:
So Called Saints
Dismalimerence
Sons of Ra
Molder
Foredooomed
and Toxic Ruin


Happy Headbanging!
Posted by joelabeverley at 10:57 PM No comments:

(Concert date: August 8th, 2014)
Motley Crue were one of the best known metal bands of the 1980's to come out of LA and were a dominant force in the hair/glam metal scene for over a decade. They set some notorious standards for the decadent lifestyle clichés of heavy metal, rock and roll culture during this era. With this tour, they we giving all their fans from over the years a chance to see the original line-up one final time. To make the 'Farewell Tour' even more convincing, the band signed a cessation of touring contract! Whether that holds true or not, time will tell, but for this night I was treating it as my last opportunity to see the Crue in concert! 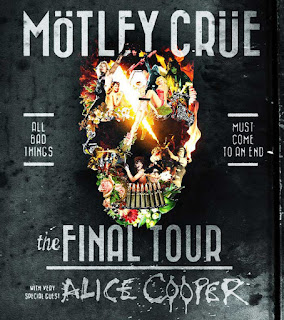 Their opening act was the shock-rock veteran, Alice Cooper! Alice opened the show in style as he delivered a great set of songs ranging from classics like 'No More Mr. Nice Guy', 'I'm 18', and 'Billion Dollar Babies' to some later-era selections like 'Dirty Diamonds' and 'Feed My Frankenstein'. The best was his closing number, 'School's out', where he seamlessly incorporated a verse from Pink Floyd's 'Another Brick in the Wall, Part II'. (this version of the song has a studio-recorded version on Alice's all-star collaboration with Johnny Depp: Hollywood Vampires!)

Then it was time for Motley Crue! Their set opened with the autobiographical 'Saints of Los Angeles', and from the start they were off and running. While I truly enjoyed everything they played, I did have a couple favorites that stood out above and beyond the rest of the show. ‘Saints of Los Angeles’ is an undeniably great song. Their early number ‘On With the Show’ was memorable and not necessarily expected. Then when they played a portion of Sirius’ arena rock staple ‘Rock n Roll part 2’ as an intro to ‘Smokin’ in the Boy’s Room’ I felt I had truly heard something special.

They finished off a great set, compiled of all their greatest hits, heavily focused on their late-80's heyday. Truly, when it comes to farewell tours, I don't think you can expect a deep set list to go beyond the major hits and fan-favorites. The only thing is I wish they had toured more consistently, but between break-ups and reunions, revolving doors of members, and health issues, they really didn't have a chance to be consistent. At least they gave the fans this farewell tour. For that I'll always be grateful.

Thank you to Vince, Nikki, Mick, and Tommy, for creating the music you did, performing it for us one last time, and best wishes for you all.

Setlist ALICE COOPER
-(The Underture)
-Hello, Hooray
-No More Mr. Nice Guy
-Under My Wheels
-I'm 18
-Billion Dollar Babies
-Poison
-Dirty Diamonds
-(Drum Solo)
-Welcome to My Nightmare
-Feed My Frankenstein
-Ballad of Dwight Fry
-I Love the Dead
-School's Out (w/ verse from Another Brick In The Wall-Pink Floyd)


Setlist MOTLEY CRUE
-Saints of Los Angeles
-Wild Side
-Primal Scream
-Same Ol' Situation
-Looks That Kill
-On With the Show
-Too Fast for Love
-Rock N' Roll Pt.2/Smokin' in the Boys Room
-Without You
-MF of the Year
-Anarchy in the UK
-Dr. Feelgood
-In the Begining/Shout at the Devil
-Don't Go Away Mad
-Drum Solo/Guitar Solo
-Live Wire
-Too Young to Fall in Love
-Girls Girls Girls
-Kickstart My Heart
--------
-Home Sweet Home
Posted by headbanger_71369 at 12:01 AM No comments:

When it comes to heavy metal concerts, there are few artists that can be compared to Iron Maiden in terms of stage shows. With their Legacy of the Beast Tour they prove once again that they have an incomparable stage show, while also delivering a career spanning set list that left few Maiden fans wanting for anything else.

Their opening number was “Aces High”, and with this song they spared no expense. Mere seconds after the intro of Winston Churchill's speech, there was an enormous cloud from fog machines out of which emerged a life size WWII Spitfire fighter plane! Complete with a functional propeller and suspended like a marionette above the stage, the plane soared, or dove, or banked and turned throughout the entire song. I spent the whole 5 minutes with my jaw agape at the amazing spectacle. And this was just the first song!


They went on to bombard us with great hits, classic concert staples, nostalgic nuggets they've not played live in years, and quite a few surprises- both in song selection and special effects! "Flight of Icarus" included a gigantic winged figure with lines of fire that destroyed the wings, giant canvas back-drops that told the story behind many of the songs. It was a full experience both visually and audibly.

Although there were no tracks performed from either of their 2 most recent albums, that was probably by design- this was after all the Legacy of the Beast tour, so those songs that Maiden’s legacy is built upon deserved their moment in the spotlight, flames, and glory. Their set featured songs off of 10 different albums, and still they found time to include some deep-tracks in addition to the expected classics.

One personal favorite among those 'deep-tracks' was "For the Greater Good of God" from the A Matter of Life And Death album. (See my thoughts on that specific album in this post) Another welcomed surprise was the fact they included songs from both albums from the Blaze Bayley-era; "The Sign of the Cross" from The X-Factor, and "The Clansman" from Virtual XI!

With pyrotechnics and stage props that literally brought the songs to life in some cases I can honestly say that I’ve never been as impressed with a concert as I have with the Legacy of the Beast! This show was one for the ages, and I can’t imagine where they’ll go from here. But I certainly hope I’ll be able to see Maiden again on a future tour.

Iron Maiden's setlist follows:
-Aces High
-Where Eagles Dare
-2 Minutes to Midnight
-The Clansman
-The Trooper
-Revelations
-For the Greater Good of God
-The Wicker Man
-Sign of the Cross
-Flight of Icarus
-Fear of the Dark
-The Number of the Beast
-Iron Maiden
----
-The Evil That Men Do
-Hallowed be thy Name
-Run to the Hills