Post #276
As the runner-up from 2012's Independent Band Reader's Poll, Indolent were another local band high on my list to check out. Hearing tracks from their release Stillwalk through their websites and social networks was what brought them to my attention. Though they didn't quite pull out the victory, losing by a slim margin to Fist To The Sky in the end, I still wanted to give their album the attention it deserves. 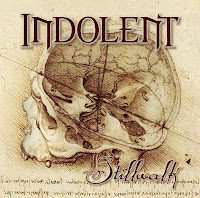 Stillwalk opens with '49; a clean-guitar instrumental track that serves as an intro to this album, and it leads straight into the fast and furious 'Last Words'. It is an intricate, high-tempo riff that barrages yours ears while vocalist/bassist Scott Murphy's voice delivers the lyrics with a scratchy, melodic growl. His voice could be described as a 'grungier James Hetfield'. Throughout the song there are intermittent guitar leads that complement the rhythm guitars and vocal melodies. At the three-minute mark there's a minute-plus of guitar solos where brothers Jamie and Josh Booth shred like they mean business.

The next track 'Mind Over Martyr', is another heavy thrasher peppered equally with melodic guitar phrases and hardcore backing vocals sung by drummer Adam Booth. This song displays their potential with hardcore metal elements while maintaining their primarily thrash-inspired sound. Traditional metal influence is also apparent in the ever-present guitar solos. By this point I realize Indolent are truly filling the niche of quality thrash metal music for me!

'Visceral' and 'Undone' are two more of my favorite tracks on Stillwalk.They both feature the catchy yet challenging riffs, constant and clever use of melody, and true talent when it comes to lead guitar solos. Honestly, this is classic thrash metal at its best. This album amazed me the first time I heard is and never seems to stop growing on me. I seriously can't picture my music collection without it now. It has become an essential part of my collection.

Not to take away from the brilliance of the thrash and classic metal elements that dominate the style of this release, but there is a fair amount of clean guitar melodies and melodic guitar parts that give the entire album a very rewarding listening experience. Songs like 'Visceral' and 'Eyes Deep' are a couple examples that bring a variety of sounds, tones, and help to round out the diversity of the band's influences. The use of the softer and melodic guitar sounds brings an essential and timeless texture to Stillwalk that has forced me to keep listening to it over and over for months.

Whether you call Indolent traditional metal, melodic thrash, or melodic metalcore doesn't really matter. This album contains all of those elements, but the listening experience transcends them all. This is a top-notch metal album by any standards. If you're a fan of thrash or traditional heavy metal you're really doing yourself a disservice by not checking out Indolent!

Recommended tracks:
-'49/Last Words
-Mind Over Martyr
-Visceral (Melodic intro gives way to a rhythmic thrasher...)
-Undone (A slower-tempo thrashy number with melodic lead guitars. This song really reminds me of the late-80's and early- 90's heyday of thrash metal like Anthrax and Metallica)
-Abandon
-Monkey See
-Eyes Deep (An acoustic, melodic breakdown with guitar solo at the midpoint of this almost 8 minute track makes it a highlight track in my eyes. A true example of this band's talent!)

You can download or purchase this CD through cdbaby.
Posted by headbanger_71369 at 1:11 AM No comments:

Post #275
Trivium have been one of my favorite bands of the last 5 years, and I recently collected their 2011 release, In Waves. Trivium's musical evolution has fluctuated a little from one album to the next, but always remained a very thrash-centric variety of the heavier side of the metalcore subgenre. In Waves is no different in the sense that it does not sound exactly like any of their previous albums, but still shows some similarities to each of them. 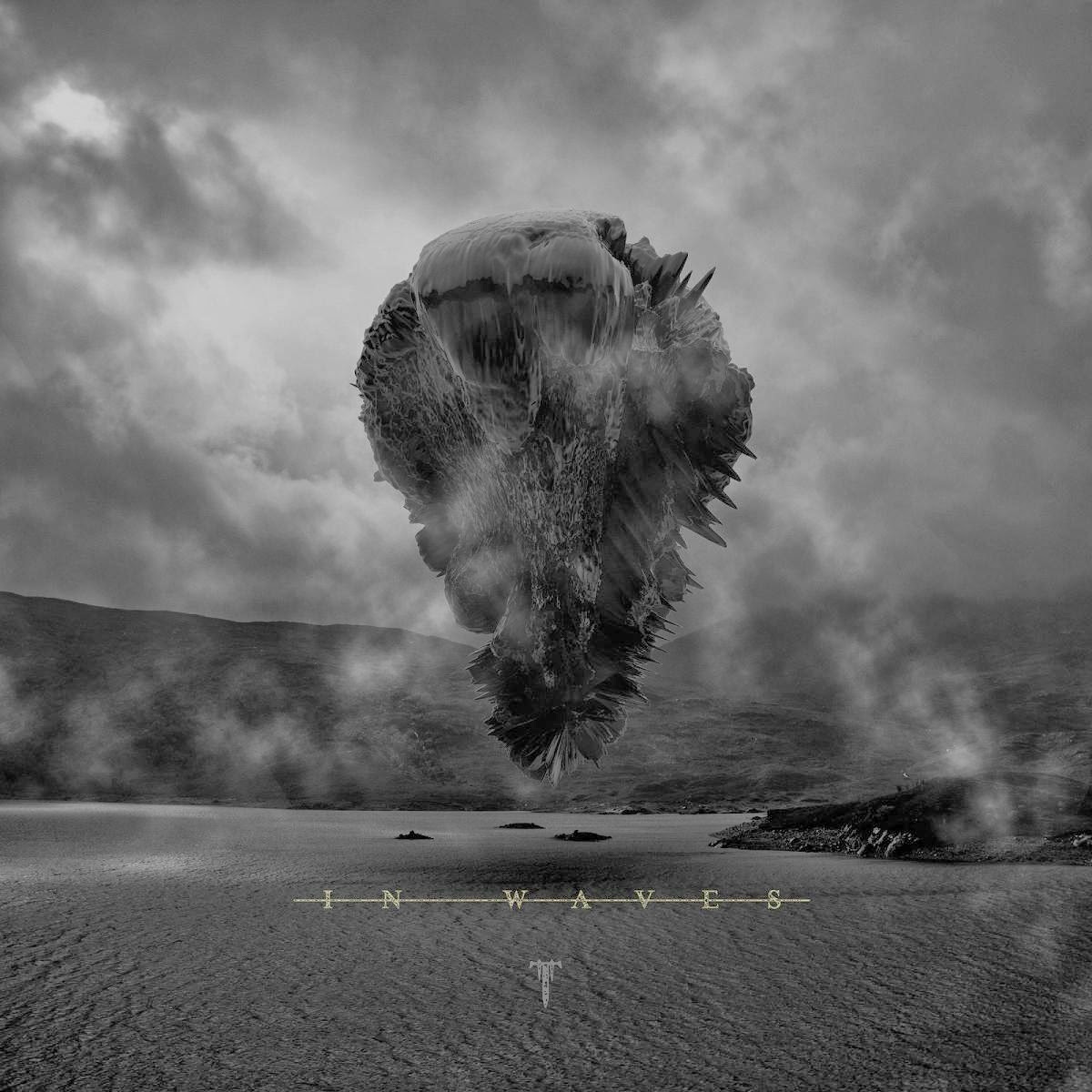 This album starts off with an interesting intro, 'Capsizing the Seas', that has some piano with a snare-drum background rhythm which builds in amplitude until it transitions to the title-track and finally Matt Heafy screams out, "IN WAVES!!!!!!!!" After the intro, the title track sets the tone for the album: brutal heaviness, and bludgeoning riffs. Heafy quickly adds his melodic voice at the bridge, singing "Do I end this now for world to see?" Seconds later he resumes his brutal hardcore screams. The song is sparse on lyrics, but abundant in Trivium's trade-mark formula of heavy thrash riffs tempered with screaming guitar solos and the slightest amount of melodic guitar segments.

The next track, 'Inception of the End', keeps the album flowing in the solid direction of powerful hardcore thrash. By this point if you're not banging your head you should have your head examined. The riffs just keep on coming: heavy, fast, and unique. Heafy continues to infuse melodies with his Hetfield-esque growled vocals.

'Dusk Dismantled' is next, and is also one of my favorite tracks, though for different reasons. This song is perhaps the heaviest number on In Waves. Here Heafy employs his hardcore vocal style to the extreme, it approaches guttural, death-metal screams in many instances. Corey Beaulieu adds his own hardcore screams in backing vocals, bringing the aggression level even higher.

'Drowning In Slow Motion' is one of the bonus tracks. Cleverly interspersed throughout the album, rather than just bunched together at the end, the bonus tracks make for a more continuous listening experience. This is another classic heavy Trivium song, with a balanced mix of hardcore and melodic vocals. Lead guitar riffs and solos again remind me of some of the best thrash metal ever.

Trivium really know how to fill the seams between melodic and hardcore metal. There are a couple songs that showcase their creative and melodic elements. 'Caustic Are the Ties That Bind', while still very heavy for the most part, does contain an extended melodic break down segment. Heafy sings some of the album's most meaningful lyrics here, reflecting the enigmatic state of human nature- trying to find one's path in life. A powerfully melodic guitar solo escalates the song back to a more intense level for it's conclusion.

'Of All These Yesterdays' is by far the most melodic song on this album, but it brings tragic, yet poetic closure to the album. Lyrics that are dark and reflective, a clean-guitar melody that haunts with its minor-key tonality. Before it fades into the next track, 'Leaving This World Behind', my favorite lyrics ensue: "With the end in sight, I cleanse what's left of light, press it against my head, and dream of the color red."

For the old-school thrash metal fans, they include a cover of Sepultura's 'Slave New World' from their masterpiece Chaos A.D. Heafy again proves his voice is among the best in metal today, doing justice to this classic thrash song.

In addition to the bonus tracks on the audio disc, the special edition release also includes a DVD with the music video for In Waves and live rehearsal footage of 8 songs. Four new songs and four classic Trivium songs are performed in-studio. You get close up views of Heafy as he screams and sings, Paulo strutting around the rehearsal space with his bass, Cory ripping some great guitar solos and providing the backing screamed vocals, and new drummer Nick Augusto blasting out the beats. It may be a page out of Metallica's book, as they included a DVD of rehearal footage of the entire St. Anger album when that came out, but it's still an insider's view of Trivium performing with all their energy. Any die-hard fan would love it.

Recommended Tracks from In Waves:
-In Waves
-Dusk Dismantled
-Watch the World Burn
-Built to Fall
-Drowning in Slow Motion
-A Grey So Dark
-Chaos Reigns
-Of All These Yesterdays

Live rehearsal tracks on the DVD:
-In Waves
-Black
-Built to Fall
-Watch the World Burn
-The Deceived
-Suffocating Sight
-Down From The Sky
-Ember to Inferno
Posted by headbanger_71369 at 9:47 PM No comments: