Post #268
In 2013 Killswitch Engage surprised their long-time fan-base by reintroducing Jesse Leach as their lead vocalist. Leach had previously been the band's singer for their first two albums from 1999-2002. His replacement, Howard Jones, left the band in early 2012, and a short search for a replacement ended when Leach expressed interest in returning to the band. 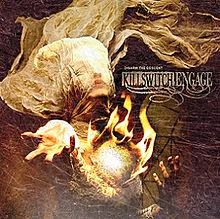 With their reunion with Leach now solidified Killswitch proceeded to complete their latest full-length album Disarm the Descent. To what degree the direction of this album was influenced by the events involving their change in lead singers I can't be sure. Regardless, this album sounds like the band has made an honest effort to recapture the intensity of their early days while maintaining just enough of their melodic side to retain the classic Killswitch Engage sound.

This album is packed with memorable riffs and a killer intensity. While their last album with Jones might have had an overall push for a more mainstream sound, this album veers back into the waters of hardcore a little bit. Long-time KsE fans will be pleasantly surprised by Leach's familiar voice, but he has honed the melodic side of his voice over the years as well. Songs like 'A Tribute to the Fallen' and 'Always' have prominent melodic elements that the Howard Jones-era fans will still appreciate. Meanwhile songs like 'All We Have' and 'The Call' are perhaps the heaviest songs they've written since Leach's last album with the band, Alive or Just Breathing.

Overall I find Disarm the Descent to be a huge success. The band sounds like they've never missed a beat with Leach. This album is heavy, but the songs are so enjoyable I rank it right up with The End of Heartache or As Daylight Dies as far as personal favorites go. At what is probably a key stage in this band's career, they could not have put forth a more solid effort than this. Add this album to your collection. It's worth every penny!

Recommended tracks from Disarm the Descent:
-The Hell in Me
-Beyond The Flames
-The New Awakening (Great guitar solo on this song. I always wish Killswitch would play more lead guitar solos.)
-In Due Time
-You Don't Bleed for Me
-The Call
-Always (The softest song on this otherwise heavy album. Perhaps their best ballad since 'My Curse')
Posted by headbanger_71369 at 9:30 PM No comments:

Post #267
Fist To The Sky have a new EP coming out soon, and to celebrate they are playing a live show at the Beat Kitchen on West Belmont Avenue in Chicago! Don't miss your chance to hear them live, and pick up your copy of their new EP Forever We Will Stand this Saturday, October 26th! 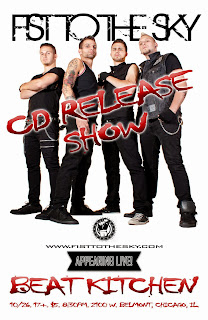 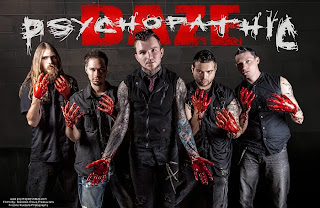 This Chicago-based metal band delivers a technical and brutal strain of heavy metal. A very metalcore/ hardcore formula that will get your adrenaline flowing. Vocal style is mostly hardcore screams, but they do have a few moments where melodic singing tempers the fury and rage. They are on Facebook, Reverbnation and have their main website too: www.psychopathicdaze.com
Check out these songs before casting your vote:
-Ride This Bullet Home
-Moment of Clarity 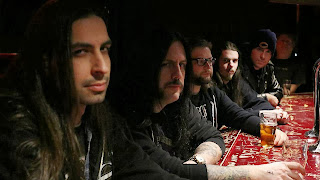 Another powerful Chicago metal band. Crusader have a more traditional metal approach, primarily thrash, but their vocalist adds an element of European power metal. Guitar solos abound, and influence from classic New Wave of British Heavy Metal can be heard. If you're a fan of classic bands like Maiden and Metallica, you should hear these guys! Hear samples of their music on Facebook or Reverbnation.
Recommended songs:
-Rise of the Templars
-Asgard's Fire
-Dead Kings

This band is from Chicago's northern suburbs and deliver a pure and brutal heavy metal sound. Their intensity of riffs and harsh vocal style draw immediate comparisons to the likes of Lamb of God or Devil Driver. They have many songs from their Evolution of Reality album available for streaming or download on Facebook or Reverbnation.
Check out:
-Crawl
-Copy of a Space 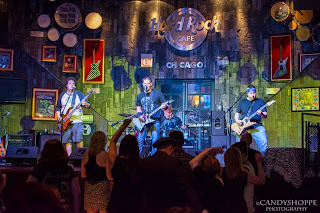 These guys from Chicago are a straight up heavy metal band. Perhaps they could also be categorized as thrash, but their vocal style is hard-edged without being full-blown hardcore. Riffs with solid grooves drive their music, with infectious hooks to draw you in. Check them out on Facebook, Reverbnation, or their own site: www.anotherblackhour.com
Recommended songs:
-Perfect Machine
-Last Stand 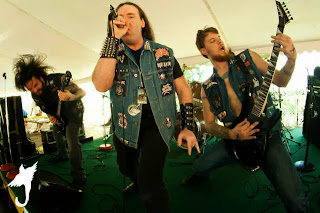 One of the best underground bands currently ripping things up in Detroit, Michigan is Wulfhook. These guys deliver a powerful variety of traditional metal. The resulting sound is akin to British metal legends like Iron Maiden with a bit of an infusion of thrash. They have some songs available for free download through their Facebook page. You can also find them on Reverbnation.
Recommended songs:
-Bridge Burner
-Eternal

Hailing from St. Louis, this band is a genre-bending powerhouse formed from the ashes of several previous bands. Fusing hardcore metal with a progressive, ambient vibe, their music is a true listener's experience. Hardcore screamed vocals are tempered with melodic singing in moderation, while intense riffs routinely give way to more subdued ambient chord progressions, and mood setting key changes. They are on Facebook and Reverbnation.
Check out these songs:
-Awaiting Refuge
-For Tonight 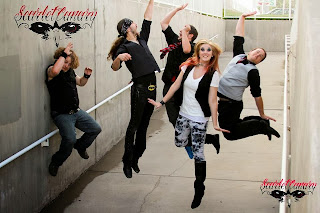 A female-fronted melodic metal band from Denver, Colorado with a hint of a hard edge, Scarlet Canary deliver catchy melodies with plenty of emotion and power. Hannah's voice has all the pretty elements of some of today's most popular female-fronted metal bands, but she'll surprize you with some well-timed screams! They are of course on Facebook and Reverbnation.
Check out these songs:
-Distorted Reality
-Nightmare

Remember to CAST YOUR VOTE for your favorite band in the current readers poll on the right! Poll runs from now through November.
Posted by headbanger_71369 at 12:17 PM No comments:

Fist To The Sky playing at The Back Bar, Saturday, October 5th!!

Don't miss another chance to see Fist To The Sky live... This Saturday they're in Janesville, Wisconsin with On My Six and more!