Post #15
Trivium are a newer metal band that I took too long to discover. I kept hearing their name mentioned in magazine articles and interviews. Most notably, I read an interview with Iron Maiden, and they kept speaking very highly of Trivium. I made myself go to a Barnes & Noble store, and preview The Crusade on one of their listening stations. I was not dissapoinetd. 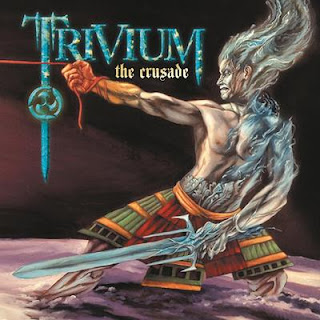 They aslo had a song on one of those sample CDs they now include in a lot of Metal magazines. The song was "Entrance of the Conflagration". Finally I had to give in and buy their newest CD, The Crusade. It was one of the best choices in music I've recently made.

These guys are pretty much classic heavy metal: Heavy riffs, plenty of guitar solos, and a good gravelly voice. I'll always consider James Hetfield of Metallica as the ideal metal singer. His voice is the standard I compare others to. Like Hetfield, Matthew Kiichi Heafy sings & plays guitar in this band. He is also the closest I've hear to Hetfield's voice in a long time. I think only John Bush of Anthrax comes closer. In fact, when I first heard the beginning of "Unrepentant", I did a double-take thinking I was listening to "Through the Never" from Metallica's Black Album.

All throughout The Crusade I was bludgeoned over the head with awesome song after awesome song. It is an aptly named CD, like a crusade to reclaim the glory of heavy metal. Right before the closing song, I was beginning to think what a shame it is that metal bands don't write instrumentals anymore. I was thinking that this band is good enough that they could probably write an awesome instrumental. Oh, well, I thought. Too bad it's not the mid-80's in the height of Thrash-metal anymore. Then "The Crusade" came on. I was banging my head with gusto, thinking this would make a great instrumental, if they just kept rolling with it, then braced myself for some lyrics (not that I'd be dissapointed, after all this guy's voice is really awesome for metal!) I kept waiting... The lyrics never came. Instead I was treated to an instrumental masterpiece over 8 minutes in length, the likes of which I hadn't heard since Metallica's "To Live is To Die", or "Orion".

I'm sure to add Trivium's other CDs to my collection before too long. I'll review them when I get to them, so keep checking back.. Now for my picks from The Crusade. I'll try not to recommend too many songs, but its hard to narrow it down when every song is so consistently good. Try these:
-Ignition
-Entrance of the Conflagration (the lyrics to this song read like an episode of Law & Order: Special Victims Unit)
-Anthem (We Are The Fire)
-Tread the Floods
-The Crusade
Posted by headbanger_71369 at 12:56 PM