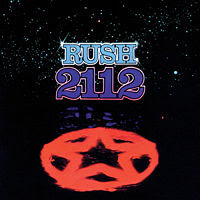 In 1976, many rock bands seemed to be inspired to create some of their best work of the times. As I mentioned a few posts ago, there were numerous rock albums notable for having some of the best work of many bands' careers. I thought it the ideal topic for a truly challenging reader's poll, and it was a tight race down to the finish. That being said I was still a bit surprised to see that Rush's 2112 came out on top.

2112 didn't particularly have any of Rush's biggest hits from the 70's, but it did carry the most cohesive concept of any other music released that year. On this album, Rush tell a story set in a futuristic, post-apocalyptic, Star-Trek-ish setting, where a "Solar Federation" has supreme control over all knowledge and has humanity living an extremely sheltered existence. If it were told in a novel format it would fit right in with similar stories by the likes of Ray Bradbury, Margaret Atwood, and Orson Scott Card.

2112 chronicles the story of a person who discovers an ancient, mysterious thing- a guitar. Compelled to share this wondrous thing with the rest of humanity, he brings it before the high priests, who promptly discourage the idea, saying it was a part of what led to the destruction of the "ancient race". The ensuing struggle between authority and the inherent belief that the music is right is told through the music of "2112". The main plot of the concept is mainly told in the multi-part title-track, and the remaining songs seem to connect to the theme in vague, generic terms.

All-in-all this a well-executed musical project, and even in the thick of grandiose concepts told through rock music, this album ranks up with some of the best.

Ah - the inspiration includes Ayn Rand's 'Anthem', her only short work of fiction and a masterpiece of Libertarian and Objectivist thought.