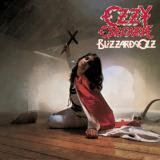 After leaving the ranks of Black Sabbath, frontman Ozzy Osbourne set out to start a career as a solo artist in the late 70's. After a couple years he'd gathered a band and written enough tunes for his solo debut. His first release as a solo artist was the memorable Blizzard of Ozz.

Blizzard of Ozz has become a classic album in the realm of heavy metal music. It is arguably the best of Ozzy's solo material to this day. Ozzy himself even considers it one of his favorites among his own work, and that is evident in his consistent use of many of the songs from this album in almost every concert he performs.
(revised 9-3-09: thoughts on the late Randy Rhoads)
Aside from this being one of Ozzy's greatest albums, it is probably also the best work of the late Randy Rhoads' too-short career in heavy metal. Lost in a tragic plane crash in 1982, Randy's career was still on the rise with Ozzy. Rhoads is famous for his use of layered guitar solos in the recording studio. Recording multiple takes of the exact same solo on top of each other, his solos have a very full and noisy sound. Who knows how far he could have gone? Rest in peace Randy!

Fellow headbangers, you have chosen Blizard of Ozz as your favorite Ozzy album from the 80's. Here are my suggested tracks from this classic album:
-I Don't Know
-CRAZY TRAIN (This song's guitar solo is probably Rhoads' best, if it's not Mr. Crowley... listen closely to hear the layered guitar tracks in the solo!)
-Goodbye to Romance
-Mr. Crowley
-Steal Away (the Night)
Posted by headbanger_71369 at 2:31 PM