Bullet For My Valentine

Post #100
More and more bands are emerging in the heavy metal scene with clear influences from classic early 80's metal bands apparent in their music. Bullet For My Valentine, from Wales-UK, are one them. They've been thrown into the 'melodic metalcore' sub-genre since they first came out, largely due to their use of hard-core screaming vocals, but have said in interviews that they're a hard-rock band with metal influences.
However you wish to categorize them, they clearly have influences from thrash, hard-core, and melodic rock in their sound. The main appeal for me is the thrash sound in their guitar-work, as well as the mixed vocal style, which is always switching back and forth between melodic and screaming vocals. They can play a mean guitar solo too, and I've said several times that great guitar solos are the best way to win me over with heavy metal. Bullet For My Valentine have done so.
Here's a look at their career so far, album by album:
Hand Of Blood ('05) [in UK: Bullet For My Valentine ('04)] 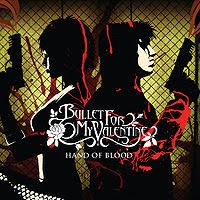 Their debut EP gives a good introduction to this band's sound & formula: fast-tempo thrash inspired riffs, therapeutic rage-filled screaming vocals contrasted with melodic vocal passages, and talented guitar solos in abundance.
My picks:
-4 Words (To Choke Upon) (a new addition on the US release, or a bonus track on the UK version)
-Hand Of Blood (this one plays out like the band's theme-song as the lyrics depict a doomed relationship ending in bullets & bloodshed)
-Just Another Star
The Poison ('06) SPECIAL EDITION
On their first full-length album Bullet For My Valentine deliver a 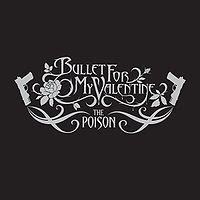 much more polished effort. In addition to the inclusion of several tracks from the Hand Of Blood EP, they have a few power-ballads on this album, as well as more thrashers. However, the BFMV power-ballad almost always has a dark side, and shreds with ferocious intensity before it's done. The 'Metalcore' element of harsh, screamed vocals has a strong presence on this album, though it is broken up nicely by the frequent use of melodic singing too. There is even a guest appearance by Apocalyptica on the intro track (which they also co-wrote). What's more is that The Poison is available as a special edition with bonus tracks and a DVD of some early concert footage & videos.
My picks:
-Intro (featuring Apocalyptica)
-Her Voice Resides
-Tears Don't Fall (perhaps their best-known song, a killer power-ballad!)
-Suffocating Under Words of Sorrow (What Can I Do)
-Cries In Vain
-Spit You Out (great fast-paced, thrash-influenced song)
-The End (Such a dark, evil sounding song. Probably my favorite. Melodic for the most part, but trashes with true fury at well-timed moments!)
---Bonus Tracks---
-7 Days
-Welcome Home (Sanitarium) (An excellent cover of the classic Metallica song!)
-Tears Don't Fall (Acoustic version- just as good as the original, just a different flavor...)
Scream Aim Fire ('08)
On this album, Bullet For My Valentine seem to smooth out the rough edges of their formula a little more. The result is that this album seems more accessible to mainstream acceptance. By this time, the band had really begun to ascend the ranks within the metal scene, earning a main-stage slot on Mayhem Fest '09 among other popular metal tours in the US & Europe. Though the songs may seem a bit formula-driven, they still get the shred out like no other. My only point of criticism is that I feel the ending of the last track, Forever & Always (a power-ballad), seems to drag on way too long. Overall, this album maybe shows off more of their 'thrash' side than their 'metalcore' sound on the previous works...
My picks:
-Scream Aim Fire
-Eye Of The Storm (This one really pushes the tempo about as fast as I've heard from this band. Enough so that I would compare it to songs by DragonForce!)
-Hearts Burst Into Fire (probably the best power ballad on this album...)
-Waking the Demon
-Say Goodnight (best mix of melody & thrash, clean & heavy, on this album)
-End of Days
FEVER (2010) 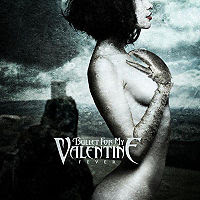 Bullet For My Valentine's newest album again sees them perfecting their niche within heavy metal even more. You can hear them keeping elements from all their previous works alive in their music, although I would probably say it's closest in sound & style to the Scream Aim Fire album. All the facets of their music you may have grown to love by now are present on this album, and in perfect balance. Their masterful power-ballads keep this album highly accessible for the mainstream-metal audience, but they also make sure to incorporate enough of the metalcore-screaming vocals to keep that portion of their following faithful as well.

My picks:
-Your Betrayal
-Fever
-A Place Where You Belong (this is one of the ballads, and my favorite one on this album)
-Pleasure and Pain
-Begging For Mercy
Posted by headbanger_71369 at 4:23 AM