Post #106
On July 18, 2010, I attended my first-ever Iron Maiden concert. Long overdue, I know, but better late than never, and well worth the wait! Here's my review of the show...

On a warm July afternoon I made my way to the First Midwest Bank Ampitheater once again to catch what promised to be a memorable heavy metal concert: Iron Maiden, with Dream Theater as the opening band. This was an excellent combination, I felt, since I'm also big fan of Dream Theater. I could not wait for the show to start. 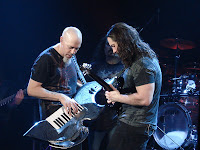 I didn't have long to wait, as I barely made it to the venue before showtime. I had just found my section and was making my way to my seat when stage lights came on, and John Myung of Dream Theater emerged from the smoke that had filled the stage, playing one of his classic, melodic bass-guitar riffs. The song was 'As I Am', and Dream Theater's set was off to a powerful start!

For a band known for their epic-progressive, and very, very long songs I was a bit concerned that Dream Theater wouldn't get to play too many numbers as an opening act. I was pleasantly surprised, however, as it became apparent they were focusing on their heavier (and for the most part shorter songs). Admittedly, the thrashy side of Dream Theater has always been my favorite. They were able to squeeze in 6 selected songs, closing with their classic 'Pull Me Under'.


Then there was a bit of a break as the stage crew went to work preparing for Maiden. I took the opportunity to head out to the vendors, grab myself a tour T-shirt, a drink, and return to my seat. It also made for less waiting time. I was ready for Iron Maiden.
They opened their set with 'The Wicker Man' from their reunion album Brave New World. A great thrash number to get the crowd pumped off the bat. When the vocals kicked in, Bruce sprinted from the back-stage area, hurdled a row of monitors, and began belting out the song with such energy as I had rarely seen in any rock show! He was sporting a simple black T-shirt which read 'PSYCH WARD' across the front, and his energy continued as such for most of the show.

I was a little surprised how heavily Iron Maiden favored their newer material (i.e. since their reunion in 2000). They did play a few older tracks, but easily two-thirds of their set was selected from the albums Brave New World, Dance of Death, or A Matter of Life and Death. This was fine by me, as I've become a huge fan of these albums. I think Iron Maiden are arguably better now than they have ever been.

One of my favorite moments from the show was when Bruce took a few moments between songs to remember the late Ronnie James Dio. He shared a little story with us of a time he was on tour with Dio and heard him complaining about the song 'Rainbow In The Dark'. Ronnie had said that 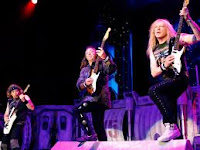 he hated that song, that he was sick of it. "Well, why do you play it all the time then?" asked Bruce. "Because the fans want to hear it." Dio replied simply. And that was what was always important to Ronnie James Dio, giving the fans what they wanted to hear. For a moment I wondered if they were going to play 'Rainbow in the Dark'. Though they did not, they did dedicated the next song to Ronnie, 'Blood Brothers'.

Maiden continued through a fantastic set, as I've mentioned focusing mainly on their newest 3 albums prior to The Final Frontier. A giant Eddie came out a stalked the stage during 'Iron Maiden', dueling with Janick Gers for a bit. Then when it seemed the show was over, they came back out for an encore, and played three of the greatest classics: 'The Number of the Beast', 'Hallowed Be Thy Name', and 'Running Free'. 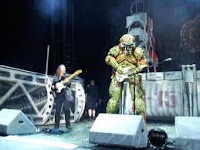 The set list from this memorable night of heavy metal legends:


Iron Maiden
-The Wicker Man
-Ghost of the Navigator
-Wrathchild
-El Dorado (the only song from their new album, which had not yet been released.)
-Dance of Death
-The Reincarnation of Benjamin Breeg
-These Colours Don't Run
-Blood Brothers
-Wildest Dreams
-No More Lies
-Brave New World
-Fear of the Dark
-Iron Maiden

Hi there,
I work with Iron Maiden and would love to share our other clients with you. Could I please have your email address so I can send you some music for review? Thanks!
Mary

Hello Robin/Mary,
I am curious about your offer. I enjoy reviewing heavy-metal artists, new or old. You can email me at: happyheadbanger@gmail.com

I would like to hear more details from you. Thanks for commenting & reading this blog.