Post #166
It's finally here! The OFFICIAL Bracket for Heavy Metal Madness 2012! This contest will play out over the course of 2012 through numerous reader's polls each month here at Heavy Metal 107. The winner in each match-up will be determined ENTIRELY BY YOUR VOTES! The only exception will be in the event of a tie, in which case the higher seed will advance. So keep an eye on this blog on a monthly basis so you don't miss a chance to vote for your favorite bands! Spread the news to your friends by sharing this blog on your social networks, the more votes the better. There will also be a contest, with prizes, for the most accurately predicted brackets. THERE IS NO ENTRY FEE! All you need to do is completely fill out the bracket with the bands you think will advance in each round, and send it back to me by the deadlines below and you're in!

HEAVY METAL MADNESS 2012 Scoring, Rules, and how to submit your bracket:
Scoring: For each correctly predicted match-up, each entry will earn points based on the band's original seed multiplied by the number of the round*. The first round of 64 bands begins in January, runs through May, and will be played out in four 30-35 day polling windows. The second round of 32 bands will be conducted over two 30-35 day polling windows in June and July. The Sweet Sixteen is the 3rd round, Elite Eight is 4th, and the Final Four is the 5th AND FINAL round.

*The only exception to the seed-based scoring is in the 'play-in' round (where the 16th and 17th seeds face-off for the chance to face the #1 seed in each quadrant). A correct prediction of this round will count as 1 point, and will only be used to decide a tie-breaker among entries at the conclusion of Heavy Metal Madness. The play-in round is considered a 'bonus round', and is not required to be eligible for this contest. The play-in bonus round does have an earlier deadline than the official deadline to submit a bracket prediction.

In each poll, in the event of a tie, the higher-seeded band will advance, up until the Final Four. If there is a tie for 1st place in the Final Four, there will be a tie-breaking follow-up poll featuring only the 2 bands that tied for first.

Only the correct winner is needed to earn points for any given round.

There is a bonus of 5 points for each correct band to reach the Final Four, and a bonus of 10 points for correctly predicting the overall champion.

Prizes will be given away to at least the 5 highest-scoring brackets, possibly more depending on the number of entries received by the Heavy Metal Madness deadline. Prizes will consist of a variety of the following items: CDs, DVDs, magazines, posters, or stickers featuring bands from the Heavy Metal Madness bracket. I will ship them to the winners at my own expense.

The deadlines for bracket submissions are:


To request an email with an attachment containing the official Heavy Metal Madness 2012 Bracket (Excel spreadsheet), send an email to: happyheadbanger@gmail.com
You may also request my mailing address through that email, and I will accept paper-copies of your predictions so long as the envelope is post-marked by the deadlines given above.

Feel free to contact me if you have any questions or are unclear about any specifics in this competition.

Here is an image of the OFFICIAL bracket: 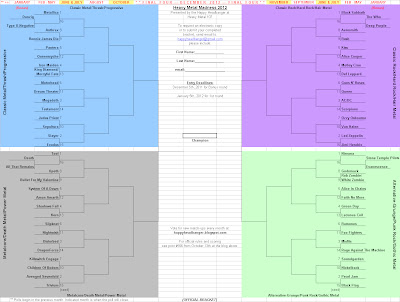 It can also be found at the bottom of the blog, where it will be updated once the tournament has begun.

The top prize package will also feature a $20 gift card to ROCK AMERICA! You may also stop in at their Vernon Hills, IL location and fill-out a bracket on the spot, or drop one off there!