Post #197
In the summer of 2011 I attended Mayhem Fest for the second time. This time around it featured...
On the rotating Jegermeister and Rock Star Energy Drink stages: Kingdom of Sorrow, Suicide Silence, Unearth, Athiarchists, and Hatebreed.
And on the MAIN STAGE: Machine Head, Megadeth, Godsmack, and Disturbed

This year, I was lucky enough to receive a fan package as a birthday gift: 4 lawn tix, a T-shirt, bottle opener and arm-band! Totally hyped for this great line-up of bands, I called on some close friends to join me for some Mayhem... 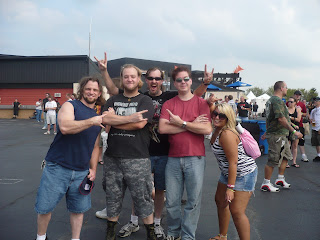 We got there in good enough time, perhaps missing the first couple opening bands on the 2nd and 3rd stages, but still as early as I've ever arrived for an all-day metal fest. The first band we truly got to see on this day was Suicide Silence. They were intense; filling the air with shredding riffs, and screech/scream vocals. Essentially delivering on their hardcore/death metal sound.

Next up was Unearth. These guys were considerably less death-metal, more hard-core. Personally I liked them much better than Suicide Silence. The main thing was that the 4 of us were having a good time, and enjoying some metal music. Unearth were more of a straigh-forward, hardcore/metalcore band. Not too much shrieking, not very 'deathy' vocals, just hard-core power-screams, and of course, plenty of up-tempo heavy riffs! Before their set finished, a couple of their guitarists got on top of the tour bus and shredded some headbanging riffs up there. 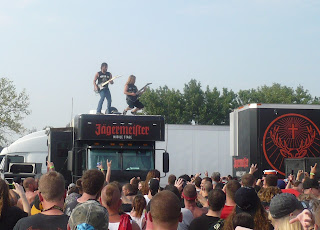 Flip back to the other stage, and another band had began to warm up... or were they playing already? It didn't appear so, as there were only 2 guys on stage (maybe three if you count the roadie hauling some equipment around). We edged closer to see better what they were doing... On-stage were two scruffy looking dudes, jamming the hell away on guitar and drums. A banner with their name 'The AtheiArchists' hung in the background, and as the guitarist began singing some hardcore vocals, we assumed they had already begun their set. We didn't quite know what to think of them... We're they trying to be a super-fast, and super-heavy version of The White Stripes? During one numbed they started insulting and teasing each other, rousing some laughs from the crowd. Without a doubt, by the end of their set we gave them an 'A' for effort! They even closed with a cover of Slayer's 'Raining Blood'. If you look them up online you may find videos of them playing death-metal to rush-hour traffic out the side of their U-Haul-converted-to-stage vehicle. 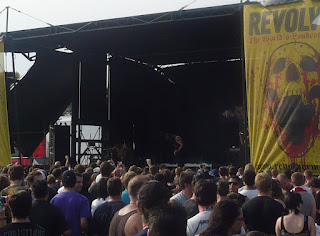 Before I forget to mention it, during the entire afternoon of 2nd stage performers, there was a troop of stunt-motorcycle riders doing fancy jumps in the parking lot for entertainment. I believe they were called the Metal Mullitia. Pretty cool stuff! 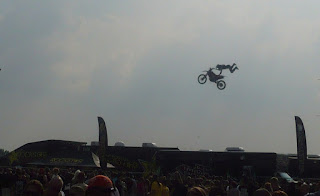 Last act for the 2nd stage was Hatebreed. These guys were true to form: straight up, hardcore metal! They delivered plenty of killer riffs and hard-edged screaming vocals. I did catch a title for one of their brand-new songs, '  ', but beyond that, I am still not very familiar with Hatebreed's back-catalog. My group of friends and I decided after a song or two, to begin heading toward the lawn to get a good view of the main-stage. We were all much more hyped up for all the big-name acts!

This was my first time ever seeing Machine Head, but one of my buddies had seen them once before. We were both anxious to hear some of their new stuff from their Unto The Locust album. They came out and got the crowd going with a couple of their classic songs. Then they spoke to the crowd a bit to see who had been to a Machine Head show before, and who was seeing them for the first time. Only one of our group had been to a Machine Head show before, so the rest of us were being initiated. Then they mentioned their new album was just out, and gave us their performance of the title-track 'Locust'. It was a killer track, and featured a breakdown section with an eerie sounding guitar solo. Perhaps meant to imitate the sound of a plague of insects munching through that summer's crops...

That song was pretty long, and they only had time for 2 more songs before their set time was up. Then we prepared for the next course... Megadeth! 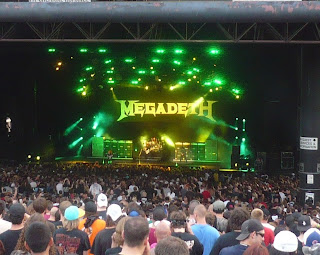 Megadeth had some t-shirt for sale at this show proclaiming it the 25th anniversary of Peace Sells... But Who's Buying? So I wondered if perhaps they were going to try to play the whole album. But on a huge fest like this, all the bands have shorter set-times, except perhaps the headliner, so they didn't play the complete Peace Sells.. They did feature the two most memorable songs from that album, 'Wake Up Dead' and 'Peace Sells' in their set. Otherwise they delivered a good mix of new and old tracks, plus they unveiled a new track from their new album Th1rt3en (which was released a couple months later), 'Public Enemy Number One'.

Next came Godsmack. By comparison to many of the other bands, they were perhaps not as heavy, but they came to win us over with music. Their lead singer, Sully Erna, walked onto the stage and said as much, saying they left out the pyro and fancy effects in favor of delivering a great rock n' roll show. 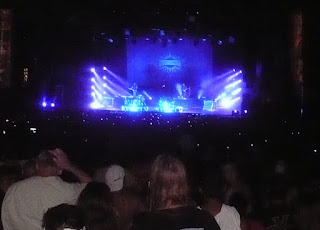 True to their word, Godsmack had the crowd rockin' with some of the best selections from their music catalog. The best part of their set had to be the drum solo/dual where drummer Shannon Larkin kept us entertained while a 2nd drum set was wheeled onto the stage, and Sully himself put down his guitar to do some drumming of his own! Toward the end of the drum battle, the rest of the band came back to the stage and commenced to jam on some classic rock and metal riffs, part of which included Black Sabbath's 'War Pigs', where the crowd sang the lyrics as the band played.

Last up was Disturbed, and they had a tough act to follow! Their stage included a huge video back-drop. During the intro, 'Remnants', the video played an interesting short-film, where David Draiman was catatonic. head-trippy images flashed intermittently between scenes of Draiman on a stretcher. At one point, on the film, David regained consciousness, just in time to run onto the stage to begin singing 'Asylum'. Disturbed had opened their set, and hit the ground running.

While the video screen kept playing different imagery during the show, the band pretty much kept jamming out their songs. They delivered on top-notch performances of the songs, but were a bit limited in their showmanship, largely due to their stage set. It was quite different from Godsmack's approach, but the metal was still enjoyable. Mayhem had been thoroughly enjoyed!

Now, as usual, I leave you with the set lists from my favorite acts from this show...

DISTURBED
-Remnants
-Asylum
-The Game
-Prayer
-Liberate
-The Animal
-Inside the Fire
-Warrior
-(Sickness Medley) Fear/Meaning of Life/Numb/Voices
-Another Way to Die
-Stupefy
-10,000 Fists
-Indestructible
-Down With the Sickness
Posted by headbanger_71369 at 11:15 AM