Celtachor-Nine Waves from the Shore

Post #237
In these times, heavy metal music is constantly evolving: creating new sounds or combinations of sounds, pairing elements of music from across various genres and subgenres of rock and metal. When I discovered Celtachor, who describe their genre as "Irish Blackened Folk Metal" I was immediately intrigued to hear what they sound like. 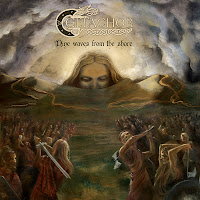 Their debut CD is titled Nine Waves From The Shore, and can be purchased through http://www.celtachor.com/ or find them on facebook. True to their description, they clearly have a strong black-metal influence. Add to this the traditional Celtic-style susato whistle, some acoustic guitars, and abundant references to Irish Mythology and you can't call this music anything other than 'Irish Blackened Folk Metal'.

The black-metal style is the first impression you get as you begin listening to the first track: 'The Landing: Amergin's Conquest'. After a fade-in sound of waves crashing into the shore, heavy thrash-style riffs bombard you along with thundering bass-drumming. The lyrics tell the story of Amergin's conquest of Ireland, part of the Invasion Cycles of Ireland's Mythology. Specifically this epic, ten-minute song recants the the tale of how Amergin, The Druid of the Gael, leads his people to claim the land from the Tuatha, avenging the death of Ith in the process. Each successive song proceeds to bring light to other tales from the same era.

Vocals are shrieked or screamed throughout, clinging close to the known style of black-metal. It is when the susato whistle enters the mix, providing Celtic folk-style melodies, that Celtachor set themselves apart from the crowd. The music of Celtachor has an ebb and flow to it, as aggressive elements intensify then periodically subside to allow the softer, melodic side of the music to rise to the surface. Just when you think you've heard all that Celtachor have to offer, they reveal something new.

More tales from the mythology are told through the lyrics of each successive song. Plights, of characters such as Dobd, Annan, and the Dagda are brought to life with a soundtrack of furious thrash riffs and a menacing voice. If you are an open-minded fan of extreme styles of  metal music, then you will want to give Celtachor a listen!

Tracks I recommend from Nine Waves From The Shore:
-The Landing: Amergin's Conquest
-The Battle of Tailtin (Another thrashing tune that interprets the epic battle)
-The Kingship of Bodb Dearg (An acoustic intro for this one, then a slower tempo thrasher for much of the song)
-Sorrow of the Dagda (Another epic song, over ten minutes in length, tells a bit of the tale of the Dagda- a father-figure god of Irish mythology. This song focuses on a curse that fell on the Dagda, reflected in the song's melancholic tone. Acoustic intro at the start, the song progresses to heavy tones, then subsides for a breakdown segment about halfway through.)
-Conn of the Hundred Battles (More of a straight forward thrasher as far as musical structure, but still an informative song regarding the myth of Conn Cetchathach, one of the ancient High Kings of Ireland.)
Posted by headbanger_71369 at 10:28 PM