When Jeff Hanneman, legendary guitarist of Slayer, passed away on May 2nd, 2013 from liver failure I posted a poll asking you what your favorite Slayer album was. I hand picked several of their albums that I viewed as the most classic fan-favorite albums. In the end, a close poll revealed that 1988's South of Heaven was your choice to commemorate the life of Jeff Hanneman. 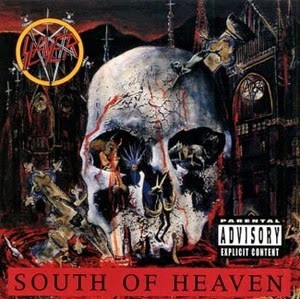 South of Heaven has long been one of my personal favorite Slayer albums as well. Of course, who doesn't enjoy the purely insane tempos of their previous album Reign in Blood? However South of Heaven provides a more unique sound and overall impression than perhaps any other Slayer album from their entire catalog.

It has been well documented that this was the album where Slayer first chose to slow things down in terms of tempo and intensity in song structure and composition. However, they never stopped making their lyrical content any less evil. The result is one of the most haunting pieces of thrash metal of all time. South of Heaven is still filled with themes of war, the occult and the holocaust, but when these themes are combined with comparatively softer tones, and quieter elements than full-blown, non-stop, intensity, the effect is that your mind has more time to focus on the topics and imagery presented in the lyrics, which are still delivered in Tom Araya's sinister lower register. Songs like the title track, Silent Scream, and Behind the Crooked Cross will leave an unforgettable impression on your psyche once you make out the message in the words.

Though he had always been a major composing force within Slayer, this album may be the one most attributed to Jeff Hanneman in terms of musical composition. It is a fitting tribute to Jeff that this album won this particular poll. In closing I will leave you with the complete track listing for South of Heaven. Every track is recommended:

Slayer
South of Heaven
1-South of Heaven
2-Silent Scream
3-Live Undead
4-Behind the Crooked Cross
5-Mandatory Suicide
6-Ghosts of War
7-Read Between the Lies
8-Cleanse the Soul
9-Dissident Aggressor
10-Spill the Blood
Posted by headbanger_71369 at 12:19 AM