Scarlet Canary are a female-fronted metal band from Denver, CO. I first discovered them when they came to Chicago to play Dame-Nation in August 2013. Their style could be called hard-rock as easily as it could be called melodic metal. I prefer the latter, especially as they incorporate elements of hardcore and metalcore into their sound.

Scarlet Canary's style and formula is actually quite comparable to Halestorm's for the most part. They employ a crisp and heavy tonality, song structures that vary form alternative rock to classic metal or even thrash, memorable guitar riffs, lead guitar solos, and catchy vocal melodies. Singer Hannah Haze delivers the lyrics with a primarily melodic style, but when she goes for it, her voice has a gritty edge when she pulls out her hardcore screams. 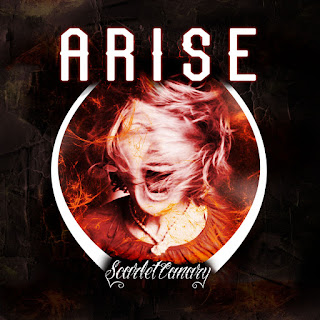 Their newest EP: Arise, gives you everything you'd expect from them for those who have heard their previous recordings, but adds the slightest hardcore edge. Since their last album they've had a change in their line-up and some of the new members bring their own influences into the mix. Overall the results are great! This band was poised to step to the next level and Arise certainly takes them in that direction.

Now for a breakdown of the tracks...
Fade-Clean guitar intro, and clean vocal melodies. The song progresses to include distorted guitars, but remains within a radio-friendly structure. This one is pretty much alt-rock through and through.

Regrets-A little heavier, this slow-to-mid tempo rocker builds to a strong chorus where hardcore vocals are used to deliver the line, "Your strength is beautiful to me!"

Death of Rock and Roll-This one is a great metal song with a strong groove, and could also be called a drinking song. Although if one would listen closely its lyrics are a tongue-in-cheek satire and lamentation of the hardships of struggling to make it in the music business as an independent artist. The crux is summed up best near the song's end when they suggest that the 'shots' you get at the bar will be the only 'shot' you'll get.

Bring Forth the Fire-Here is where Scarlet Canary up the ante a bit. During the choruses of this song hardcore screams are featured more prominently. On this one we may be hearing some of the influence from newer members, but it reveals a promising and versatile palate with which this band could continue to create music. To them I would say, 'Bring forth more music!'

Bottles and Anchors- This one has a more traditional metal/hard rock sound, keeping Scarlet Canary's sound accessible yet still heavy. Backing vocal elements tempt me to compare this number to the style to Iron Maiden. Coincidentally this song also contains one of the better guitar solos on this EP. Lyrically the song walks you through the ashes of a broken relationship, and the protagonist experiences betrayal, despair, and later some retribution.

Ghosts- This one has a memorable riff in a minor key which sets a dark mood, util the chorus brings a key-change and lifts the mood. Then the song returns to the darker mood for the next verse. This song has a true ebb and flow with the well-structured key-changes that keep the mood in flux. Another awesome guitar solo can be found here too.

Scarlet Canary are on tour again this summer and will be appearing in northern Illinois once again. This time they're hitting Rockford, IL on August 29th. Tracks from Arise are sure to be prominently featured in their set-list. If you like what you hear in the links below, then you should definitely catch them when they come through town. Visit their Official Website or facebook page for tour schedule, streaming audio and news updates. Also visit them on Reverbnation, itunes, or Bandcamp for downloads. Or you could buy a CD copy here.