Jake Stratton, the guitarist and songwriter from the band Ten With Strangers, reviewed previously on this blog, released a solo-project CD in 2014 entitled 'The Survival'. This has a bit of a different vibe than either of the TWS releases, since Jake himself also does the lead vocals here, but there is enough of his unique songwriting style to recognize the similarities. 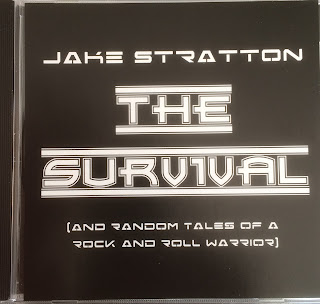 This EP rocks with a rock 'n' roll/pop-punk vibe and contains plenty of catchy hooks, melodies and clever lyrics to draw you in. At times it sounds like a 90's pop-puck effort, at others an 80's hard rock staple. In either case Jake Stratton gives you the kind of catchy hard rock that Ten With Strangers' fans might expect.

This'll Have to Do -This 'un-ballad's lyrical theme reminds me of the Sara Bareilles hit 'Love Song' in that it is not the kind of song that the title may imply. To clarify: Bareilles sings "I'm not going to write you a love song today..." The entire song in an inspiration from her record label's request for a love song from her. In 'This'll Have to Do', Jake sings, "Someday, when I tell you 'so-long!', I'm gonna write you a beautiful love song, and 'til then, this'll have to do..." Did I mention this is my favorite track on this EP?

Rock and Roll Warriors -If Green Day were to write a song telling the story of rock n' roll music from it's inception through the end of the 90's, it might sound like this. Jake starts with Chuck Berry, and walks us through the 60's, 70's, 80's, and 90's until thrash, glam, and grunge have all been introduced. It is a kind of anthem encouraging rockers to keep on rockin'.

Fallin' in Love Again -A song inspired by the Fountains of Wayne hit 'Stacy's Mom', it carries a similar pop-punk feel, but portrays the opposite scenario. Equally taboo; in this song the middle-aged man falls in love with a lady half his age...

I Don't Know - Another straight-up pop-puck type of rock song. The riff is one that sounds like it would fit right in on Green Day's 1997 album Nimrod.

March of the Zombies -Jake Stratton chooses to close this EP with perhaps the heaviest song it has to offer. This song is pretty much a description of living in the middle of a zombie apocalypse. It plods along with a slow tempo, perhaps to imitate the slow and methodical lurch of the stereotypical zombies from the old movies...

You can download all of Jake Stratton's music at Broadjam.com: http://www.broadjam.com/artists/albums.php?artistID=21904

You can also visit the Ten With Strangers Facebook page...

Additionally both of the full-length Ten With Strangers releases can be purchased for download or CD at CBaby.com: http://www.cdbaby.com/Artist/TenWithStrangers
Posted by headbanger_71369 at 12:03 AM