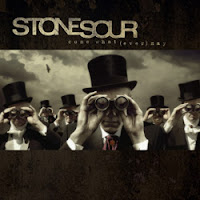 In today's Heavy Metal scene Stone Sour started up as a side project for a couple of the guys in Slipknot. The primary reason being that the material they wrote for this new band was such a departure from the blistering & brutal over-the-top heavy sound that Slipknot had become known for. Personally, I think this was a brilliant move: StoneSour is much more main-stream than any previous Slipknot material, and because of that they have opened themselves up to a whole new audience without the worry of preconceptions deterring those who may not prefer to listen to anything Slipknot are associated with.

Stone Sour first caught my ear with "Through Glass" from their 2nd album, Come What(ever) May. This song has gotten plenty of air-time on hard rock radio stations across the country, and probably represents the softest side of Stone Sour. Don't be mistaken, they can still thrash out some heavy tunes, although even these have a bit higher vocal quality than most of Slipknot's music. Corey Taylor really taps his vocal potential in this "side-project", which I hope sticks around for many years to come.

My only regret with this band is that I didn't discover them sooner. The song "Bother" from their debut album, has since caught my attention, & I plan to add that CD to my collection soon. For now I'll recommend some of my favorite songs from Come What(ever) May...
-30/30-150
-Come What(ever) May*
-Through Glass
-Cardiff
-Zzyzx Rd.

* I especially recommend this song due to its STRONG ANTI-BUSH Political theme! There need to be more songs like this out there... maybe I should do a post dedicated entirely to anti-Bush rock music?...

Dated January '09: I must correct myself! Thanks to the November '08 issue of Revolver magazine, which featured a cover-story on Slipknot & their new album "All Hope Is Gone", I stand corrected on Stone Sour's origin. It turns out that Corey Taylor was in Stone Sour originally, before either band had a record deal. The members of Slipknot invited Corey to join the band when they competed against each other in a local "Battle of the Bands" contest. When Taylor agreed, they gave their old singer the boot and landed a record deal shortly after. Once Slipknot had established themselves, Corey Taylor got back together with Stone Sour during one of Slipknot's breaks. Having the work from Slipknot under his belt, a record deal now came much easier.

I hope both bands can continue their careers for quite some time. My apologies for getting these details wrong on my initial post. I'll leave the original content as proof that I don't know everything about heavy metal (too many sometimes claim they do!). A little humbling does us all some good every now & then. I'll try to keep up on my facts in the future, but correct myself when I do find errors. Happy headbanging!