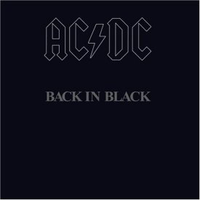 After suffering the loss of their original singer, Bon Scott, AC/DC came back with one of their greatest albums: Back In Black. Back In Black was a statement album. AC/DC showed the world that they were not done with rock n' roll. It was a new decade, they had a new singer, a new album, and a new mission to prove they could still rock.

After the first track on the album, Hells Bells, there was no need for any argument. Almost every track is a hard rock classic. Angus Young displays some of the best guitar work up to this point in the band's career. AC/DC rock as hard as ever and set themselves up for a new decade where the sky was the limit!


My favorites from Back In Black:
-Hells Bells
-Shoot to Thrill
-Back In Black
-Have a Drink on Me
and of course...
-You Shook Me All Night Long
Posted by headbanger_71369 at 4:10 AM

Yes, of course a great album and one of the best 80s AC/DC together with the underrated BLOW UP YOUR VIDEO that i realy realy love.