System Of A Down (Full Review)

Post #147 [Poll winner: Which is not a topping on System of a Down's pizza?]
For those who voted in the reader's poll regarding System of a Down's choice of pizza-toppings, you need only listen to the song 'Chic N' Stu' to discover they like... 'pepperoni, and green peppers, mushrooms, olives, chives!' That means the correct answer for the poll question was actually 'sausage'! Hope you had fun with that poll last month. Now for more about System of a Down... 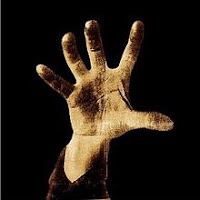 System Of A Down came onto the heavy metal scene in 1998 with their self-titled debut album and quickly revolutionized the scene with their genre-defying sound and style. With all the members being of Armenian descent, their lyrics are charged with strong political themes that reflect their unique perspective on a number of issues. Their outspoken, thought-provoking, and emotional social commentary would quickly become a trademark of theirs, and continued to grow with each release.

On their first album, SOAD quickly exhibited an array of songs that showcased their unique style and techniques. Serj Tankian's vocals are very extreme & hard-core in places, with prominent screams and guttural growls that approach the likes of death-metal vocal styles. They would migrate away form this vocal style in the coming years.

In 2001 System of a Down released their 2nd album, Toxicity. 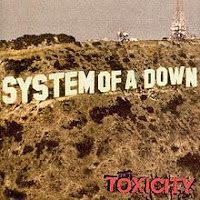 This album proved to be a true break-through effort for System. Several songs that featured prominent melodic passages became huge hits. Don't be fooled though, these songs still contained extreme elements as well. System of a Down were becoming more adept at fusing the popular and melodic elements of hard rock with the hard-edged and more extreme elements of metal, all the while managing to sound exactly like neither of those genres! 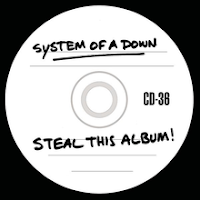 With their surge in popularity following the Toxicity album, their fan-base became strongly devoted to following their every move, and stalking the web for any hint of new music from them. Rumors of unreleased tracks from the Toxicity recording sessions sparked obsessive fans to pirate and share any such tracks if they got leaked.

Then in 2002, to put an end to the illegal downloading, while at the same time pleasing many fans, the band gave in and released the tracks as their 3rd full-length album, Steal This Album! The title was a bit of a joke as well, reflecting the fact that many fans had, in fact, stolen the tracks already. However, this final product was more polished and refined than the versions that had been leaked. Several of the songs that were released as singles also became big hits.

In 2005, System of a Down gave us what has to be regarded as 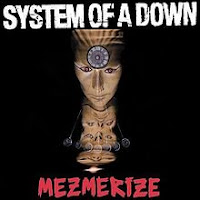 their masterpiece (at least to this point of their career), a double-album, released in two parts: Mezmerize was released in the spring, and Hypnotize in the fall of the same year. The packaging of these 2 albums was even designed to compliment each other, as Mezmerize contained a flap that could be inserted into the side flap of Hypnotize, making a double-CD folding case. The art work on the discs and inserts was also complimentary. 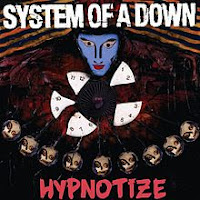 Stylistically, these last two albums by System of a Down show even more of the band's talent as musicians. Some tracks, like B.Y.O.B. exhibit the extreme side of their potential, with plenty of screams and brutally heavy riffs. Other tracks, like Lonely Day, are so soft and melodic that you may wonder if they are performed by the same band. And of course you have many numbers like Question! which switch it up between soft melodies and harsh screaming so suddenly you might think they are trying to do too much, but remarkably, SOAD make these elements work.

It is this uncanny ability to effortlessly fuse some of the most extreme styles of metal with the most catchy and pretty elements of pop-rock that make System of a Down practically incomparable in the metal scene. It has been 6 long years since they last recorded an album together. I think if they do decide to return to the studio at some point and make some fresh tunes again, we would be just as impressed as before. I still believe they are a band with unlimited potential.

For my recommended tracks from System of a Down, I'll give you the track-list for my personal mix CD; 'How Do You Own Disorder? -The Best of System Of A Down'
-Suite Pee
-Prison Song
-Soldier Side-Intro
-B.Y.O.B
-I-E-A-I-A-I-O
-Aerials
-Tentative
-Deer Dance
-Cigaro
-Sugar
-Chop Suey!
-Chic N' Stu
-Hypnotize
-Suggestions
-Question!
-Radio/Video
-Roulette
-Attack
-Holy Mountains
-Toxicity
-Innervision
-Sad Statue
-Lonely Day
-Soldier Side

(compiled on 4-21-06 by the Happy Headbanger)
Color-coded album reference:
System Of A Down, Toxicity, Steal This Album!, Mezmerize, Hypnotize

http://www.onlinecourtreportingschools.org/alcoholvmarijuana
Posted by headbanger_71369 at 9:27 PM