For the weekend of June 8th and 9th, Metallica brought their Orion Music + More festival to the Motor City’s scenic Belle Isle Park. This festival, designed after Metallica’s own vision of what a music festival should be, was a destination concert like no other I had ever been to; 'A giant backyard barbecue' was how James Hetfield himself phrased it. They brought in top quality entertainment from several facets of the band’s personal interests beyond just music. The Happy Headbanger’s mission for the weekend: get out to Belle Isle, immerse myself in all the festivities- everything from the huge variety of bands performing, to the different exhibits, attractions, and overall atmosphere of Orion Fest- and deliverer it here for you to read and enjoy. 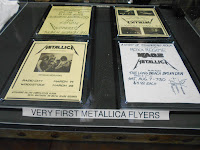 Upon arrival at Belle Isle, I first tried to scope out the whole venue before the first bands began playing. Right by the entrance was the Metallica Museum- a collection of instruments and stage gear collected by the band over their 30+ year career. Immediately behind this was the custom car and motorcycle show, with a Globe of Death stunt motorcycle riding exhibition at the end. On the other side of the street from there was the Rock and Recycle tent, where anyone who wanted to could grab a clear plastic recyclable trash bag, fill it with discarded cans, plastic bottles and cups, and return it to the tent to get a free 2-sided Orion Music + More t-shirt, listing all the bands on the bill! Then there 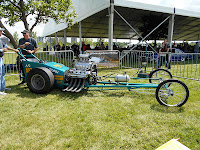 was the My World Village tent, where all the charity organizations were set up with information about their various causes. Ktulu’s Rock n’ Roll Emporium was a collection of vendors of general merchandise and unique souvenirs.

Next up was the Sanitarium Stage, featuring all the festival’s electronic-music performers, with a top-notch light and sound system prepared to assault all your senses at once. Walking to your left from there you passed by the VIP lounge and Met Club lounge before coming to the Orion Stage, the main stage of the venue built to accommodate the biggest acts of the festival, including Metallica, The Red Hot Chili Peppers, Deftones, Rise Against, and Dropkick Murphys, among others.

Proceeding further to the left of the Orion Stage you found Kirk’s Krypt Horror Musuem, the Hit the Lights Film tent, F.Y.E's music store and autograph area, and the essential Feed ‘Em All food court. I grabbed a bite here for a moment to fuel myself for the long afternoon ahead.

A quick stroll across the other half of the venue’s field were the fest's three other stages: the Frantic Stage, Vans Damage Inc. Stage and skating ramp, and the Fuel Stage-the second largest stage at Orion Fest. Now, with the fest’s layout explored, it was time to start enjoying some music!

Before much longer I heard the punk band The Bronx warming up on the Orion Stage. The show was starting already! I hung around the perimeter and took in their first couple songs before I moved on to catch my first highlighted performer of the day: Detroit’s own BATTLECROSS!! 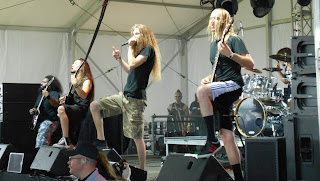 Battlecross were one of the hometown heroes of this fest, hailing from Detroit itself. Their method of attack: furious thrash metal with elements of death metal and power metal. They whipped the crowd under the Frantic Stage into a wild frenzy in seconds flat. They kept all the hardcore metal heads happily moshing practically non-stop for their hour-long set. Some highlights that old-school fans of thrash metal would enjoy included their covers of 'War Ensemble' by Slayer, and 'Fucking Hostile' by Pantera. Stay tuned: I'll cover their show in more detail in an upcoming post very soon! 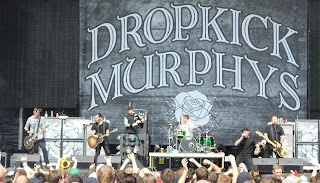 By the time I next made it around to the Orion Stage the Dropkick Murphys were just going on, so I stopped there and stayed for most of their set. They are Boston's unique blend of punk rock and Irish drinking music. Picture the Ramones singing with an Irish accent, and along with the typical guitars of puck rock music, add some bagpipes, a mandolin, an accordion, or a banjo. They paid homage to Boston itself several times in their set, playing a song for almost each of their professional sports teams. However the most heartfelt moment was when they played 'Jimmy Collin's Wake' while mentioning the charity EP it's on, Rose Tattoo: For Boston Charity. Even iTunes is donating every penny earned from its downloads to The Claddagh Fund, benefiting victims of the bombings at the Boston Marathon and others in need. Then they dropped a hint about a surprise performance. Something about Metallica playing some old material somewhere. I didn't get what they meant right away, but I would in just a few minutes...


While en route to catch Tomahawk, the next band on my list, I was distracted by a distinct sound coming from the far right-hand corner of the festival, the small Vans Damage Inc. Stage. It sure sounded like James Hetfield singing 'The Four Horsemen' to me! I changed course on the fly to see if he was doing a cameo appearance with another band...

My jaw dropped when I saw that the band that had been billed as "dehaan", was actually the real Metallica!!! The back-drop even had the name 'dehaan' crossed out, and 'Metal Up Your Ass' written over it! Being over here on a small stage, cleverly disguised by the fake name on the program, Metallica got the chance to play up close and personal with their most die-hard of fans. They were, indeed, playing old, vintage material. They even played one of my favorite deep cuts from Metallica: 'Phantom Lord'! It seemed something special was going on with this performance. This was a true surprise among surprises, one that I will cover in the truly thorough detail it deserves in an upcoming post. For now, on with the fest! 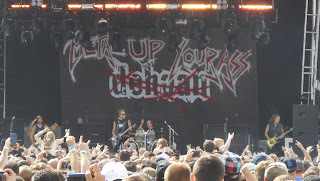 As soon as they finished, I resumed my walk to see Tomahawk finish their set on the Fuel Stage. Fronted by ex-Faith No More singer Mike Patton, they were truly a unique band. They played a weird style of alternate metal or rock. Mike Patton even sang while holding the mic in his mouth for part of one song. The bass guitar tones were exceptionally prominent in the sound mixing. You felt Tomahawks's music deep in your chest. It made your bones vibrate! 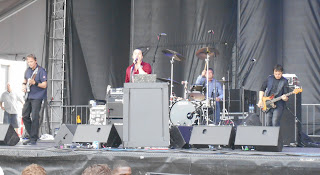 Shortly after I arrived, Mike Patton noted a big influx of more fans, and at the next gap between songs asked if any of us came from Metallica. He said, "Not to incriminate myself, but I thought they were playing the good shit!" He was very interactive with the crowd, and well articulated. At one point, Patton pointed out a little kid whose parents had brought to the show and had propped up on their shoulders. He said, "Man, if my folks had brought me to a show like this when I was that age, I'd be damaged goods!" But he gave the kid a thumbs-up before finishing their set.

Once they finished there was no time to waste. I had to trek back to the Orion Stage to catch Rise Against- one of my new favorite punk bands out of Chicago. They've been making bigger and bigger waves in recent years, and their new album End Game has a couple current hits on rock radio stations across the country. Most notable is probably 'Satellite', but also the Hurricane Katrina-inspired 'Help is on the Way'. Both of these songs were included in their performance. They were a great band to behold live. Energetic on the stage, and with good stage presence, lead singer/guitarist Tim McIlrath kept the crowd engaged throughout the show. Before their last number they expressed their thanks to Metallica for having them as part of the festival. They closed with 'Savior' from 2008's Appeal To Reason album. 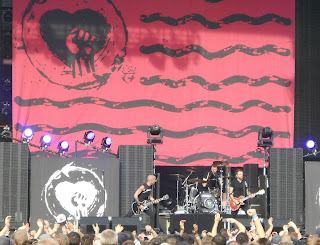 The afternoon proved a great source of exercise as again I made a return trip to the Fuel Stage to catch Robert Trujillo in one of his other bands- Infectious Grooves! Crossover funky-metal, fronted by Mike Muir of Suicidal Tendencies, Infectious Grooves again provided something a little different. At the start of their show they had a bunch of kids come out onto the stage, dancing around in rubber clown-masks. They then proceeded to keep us on our toes with music equally funky and heavy, never knowing which was coming next- a powerful overall theme for this festival. Anyone who made the effort to check out as many bands as possible would not get bored for a lack of variety. They played their classic song 'Violent and Funky' during their set, and closed with a cover of Zeppelin's 'Immigrant Song'.

Lastly, it was back to the Orion Stage. Now packed to the gills, everyone was ready to hear the night's big headliner: The Red Hot Chili Peppers. The crowd was electrified from spending the whole afternoon listening to so much great music, and the Chili Peppers became the perfect conduit to channel that potent energy. They had this massive crowd in the palms of their talented and funky hands. They would give us an intense song, then mix it up with something mellow and head-trippy following. Along with some material from their new album, I'm With You, they focused heavily on their hits from the Californication and Stadium Arcadium albums, and a couple older tunes thrown in for their old-school fans too. Anthony Keidis and Flea were as charismatic as their reputations would lead you to believe. 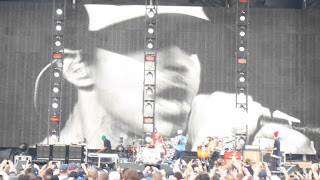 They delivered a spectacular set themselves, with just too much awesome music to cram into one review, so check back soon for an in-depth review of their amazing set. For now, know that the crowd was ecstatic, and enjoyed every hot minute of the Chili Peppers for two hours straight. Stay tuned for more...­
Posted by headbanger_71369 at 9:52 PM