For all of the lucky Orion Fest-goers that happened to attend the first day of the fest and happened to have arrived by about 4:45pm and happened to have been curious about this band with the weird name ‘dehaan’, or happened to be wandering past one of the smallest stages at the fest off in the back corner of the huge field, there was a very special surprise awaiting them. The surprise was the fact that 'dehaan' was no more than a pseudonym that Metallica had made up for themselves. In essence, this allowed them to perform a small, practically unannounced, set.

"DEHAAN METAL UP YOUR ASS" 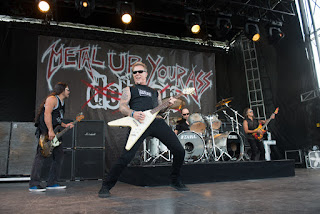 Having pretty much snuck themselves into their own festival, Metallica used this opportunity to deliver on a much speculated album-anniversary for their most die hard fans: the 30 year anniversary of their debut, Kill ‘Em All!! It's original intended title was 'Metal Up Your Ass', however Metallica's early record label discourage that title, convincing them to change it. Metallica brought the phrase back for this performance, using it as the backdrop for their set. Kill 'Em All has become a legendary debut album in the folklore of heavy metal history. This album set the stage for the entire thrash movement of the early-to-mid 80's. That era of music has been continuously held in the highest regard by heavy metal purists, and is essential inspiration for almost any extreme-style metal band emerging today. On this day, after 30 long years, those who had been waiting with baited breath to hear Kill 'Em All performed live finally got the reward they had been waiting for.

Opening with the song 'Hit The Lights', Metallica laid into this classic album with all their metallic mastery and genuinely focused on delivering each track note-for-note. James Hetfield even sounded like his old self: many old-school fans have come to complain about Hetfield singing the older Metallica songs 'too nicely' rather than emphasizing the rough scratchy screams and growls he had been know for in the days before the 'Black Album'. This was not the case on this day! Hetfield was in fine form, delivering an angry and aggressive vocal performance unlike any in recent years. I believe they made this performance as authentic as possible on purpose. Their most faithful of fans certainly deserved no less. 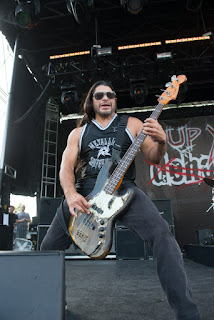 This performance of Kill 'Em All, in it's entirety, is one for the ages. Though original bassist Cliff Burton, who died in a bus accident while on tour in 1986, could not be here to perform it, I'm sure his spirit was made proud by the band's performance. Current bassist Robert Trujillo played his bass guitar with as much gusto as ever. Even when it came time to play Cliff's epic trademark bass solo, 'Anesthesia (Pulling Teeth)', the crowd got behind Trujillo, cheered him on, and inspired him to an iconic performance. The band chimed in, right on cue, to finish the song, and seamlessly transitioned to 'Whiplash' without missing a beat.

My adrenaline was flowing fast at this point. The metal was amped up to the max, fans had their devil-horned fists held high and the throngs of people were jumping, thrashing, or moshing relentlessly. I knew the obscure tracks that were coming next; 'Phantom Lord' and 'No Remorse'. These songs may not be as popular, but they still represent the classic Metallica sound. 'Phantom Lord' was one of their first songs to feature a breakdown segment that utilized clean guitar melodies to contrast with their heavy thrash sound. 'No Remorse' is simply a timeless, mid-tempo thrash riff. It chugs along like a metal machine, and is very conducive for moshing or fist-pumping. 'Seek and Destroy' has been a concert set-list staple for Metallica for years, so there was no surprise there. It is also a classic metal riff, played primarily at mid tempo, but it does speed up for a bit right in the middle. Then, as the concluding number, they pulled out the ultimate speed-thrasher 'Metal Militia'. The crowd simply went insane all over again, moshing like frenzied madmen. 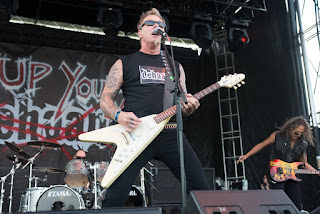 Then, finally... it was done. Metallica had given us a thoroughly thrashing performance of Kill 'Em All! Respect paid to one of thrash metal's best debut albums, Metallica thanked the crowd, encouraged them to take in all the other bands performing throughout the weekend, and said they would do the same. They also said to watch out for more surprises. In some ways, it was hard to believe that Orion Fest was still just getting started! 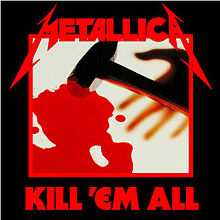