Post #262
Fist to the Sky are keeping their schedule busy this summer. They have 2 more shows later this month as they hit the road, heading north...

Next up for our Independent Band of the Year...
August 24th as part of WIIL Rock Fest 2013 in Twin Lakes Wisconsin!

If either of these venues are close to your hometown you should check out one of these shows. Fist To The Sky are building a reputation as a kick-ass live act. Wouldn't you like to see why?
Posted by headbanger_71369 at 12:14 PM No comments:

One of Chicago's most unique concert series is returning on Thursday August 15th for its fifth installment: Dame-Nation V: The Journey Towards a New Beginning. 11 bands performing on two stages, all of them featuring female lead-singers! Dame-Nation has always featured the best independent talent when it comes to female-fronted heavy metal music and this year looks to be no exception. As always there is a strong representation from Chicago's local scene, but this music fest also features bands from as far west as Denver, Colorado and as far east as Pelham, New Hampshire. 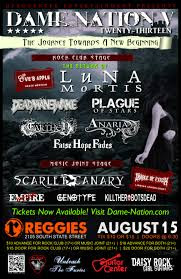 Want to know what's up in female-fronted heavy metal right now? Then there's only one place you need to be on Thursday the 15th, and that is Reggies Rock Club!