Post #260
I recently discovered another new band on the local scene in Chicago's northern suburbs: Depth of All Things. 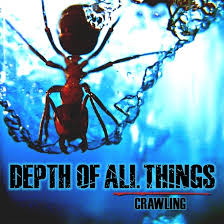 Their first release is entitled Crawling. Their formula is instrumental heavy metal, or as I like to call it: Instru-METAL! That's right, all guitars, drums and bass! Depth of All Things utilize a modern groove-metal sound mixed with tones of alternative rock for their core sound. However you will find no lyrics, no vocals, no whining or screaming anywhere on this recording. If you think this sounds like a 'glass half-empty' scenario, then you obviously haven't listened to this band yet. The chord progressions, riffs and lead guitar solos are so catchy and captivating they simply do not need lyrics to keep you engaged in the music.

The title track 'Crawling' is the opening number. It starts with a clean guitar melody that reminds me a bit of Breaking Benjamin, then progresses through a groove-metal passage before hitting you with a thundering and thrashy chorus. (perhaps 'chorus' is a misnomer considering this is instru-metal, but these songs definitely feel like they have verses, bridges, and choruses) The next track 'I'll Pay for this One Day' is a heavy number with a fast tempo and just the right amount of blast-beat drumming. You will probably find you are headbanging by now! Most of the 8 songs on this collection use different combinations of these elements, to maintain a fairly heavy sound throughout.

The last couple songs, 'Limbo' and 'Miseries of the World' slow things down a little, but there is still an electric element maintained. Though parts of these songs may be softer, slower and more melodic, they still have that essential 'heavy' sound that comes into play before they are done. 'Limbo' utilizes synthesized guitar sounds to enhance the head-trippy mood of the song. 'Miseries of the World' is very much in the same vein as 'Limbo' if not even more melodic.

You might ask why they chose to record their music in this instrumental format. Why not add a singer and write lyrics and add another dimension to the songs? True, there may be people out there who need some lyrical content to keep their interest, but there are probably an equal number who would write off any band whose vocal style doesn't fit their favorite style. Depth of All Things have cleverly avoided any such conflicts of interest with keeping their music strictly instrumental and as a result might actually appeal to a wider audience. At least on a fundamental level this CD is straight forward, pure and simple heavy metal.

Recommended Tracks from Crawling:
-Crawling
-I'll Pay for this One Day
-Fame Whore (This song is another highlight. Classic groove-metal mastery on display again. They even filmed a music video for this one. Check it out!)
-Altered States
-Limbo
-Miseries of the World (The final track on this CD is perhaps the most melodic. Though there are a few heavy segments in this song, at the end you are left with a melancholic clean guitar sound that slowly fades out.)
Posted by headbanger_71369 at 12:30 PM No comments:

Fist to the Sky in Crystal Lake! (Coming July 27th)

Post # 259
Hello Happy Headbangers!
Don't miss another opportunity to catch this year's Independent Band of the Year, FIST TO THE SKY! They're playing at The Other Side in Crystal Lake on July 27th. Also performing: Star City Meltdown and Arcane Framework.

FIST TO THE SKY deliver a fast and furious variety of modern metal. They are a band on the rise... be sure you don't miss out and see them in Crystal Lake! 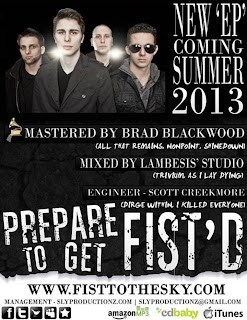 Post #258
When it comes to compilation/mix collections I'm usually skeptical, and it takes a well planned and efficiently executed collection of music to truly gain my interest. One such collection that I believe successfully achieved its goal, if not exceeded it, is The Heavy Metal Box.

Covering the history of heavy metal music from its primordial age in the late 60's up until the twilight of metal's golden era at the dawn of the 1990's (before grunge and alternative rock threatened the fan-base of metal), this 4-disc box set is a thorough representation of the first 20-25 years of the heavy metal phenomenon. I was able to check this collection out at my local library, and I am so glad that I did. True there were many bands here I was very familiar with, like Judas Priest, Iron Maiden, Metallica, Slayer, and Megadeth. However there were also many bands included that I never had a chance to listen to before, like Hawkwind, Angel Witch, Rose Tattoo, Tygers of Pan Tang, Venom, and Metal Church. My perspective on the evolution of heavy metal is all the better because I checked out this collection. You should at least take a listen to any of these songs you are unfamiliar with...


You can see there is quite a bit of diversity in this collection. Although it is sequenced in chronological order, the diversity becomes most apparent towards the end (discs 3 and 4). You can literally hear the progression, solidification, and diversification of heavy metal from a single genre of music at its inception to a multi-headed monster at the dawn of the 90's. During the 80's metal branched in 2 distinct directions: mainstream radio-friendly 'glam' or 'hair' metal, and the more underground 'thrash' or 'speed' metal. The former focused on higher-pitched vocals, and catchy, lighter melodies; the latter focused on power, aggression, and heavier darker moods.

In the end it is all still METAL! If you are a new fan of heavy metal music, do yourself a favor and listen to this collection to see, hear, and understand where metal came from!
Posted by headbanger_71369 at 10:30 PM No comments:

Post #257
After being introduced to these guys at Metallica's Orion Fest, I knew I had to check out their new album War Of Will. Lucky for me, they were selling it on-site in advance of its release, and signing copies as well. I made sure to get one and had the band sign it before the fest was over. Their live performance that day was so full of power and kinetic energy that I couldn't wait to pop the CD into my car stereo and hear what the rest of their music sounded like.

If you're a fan of high-speed thrash metal, hardcore/death metal style vocals, and power-metal style melodic grooves, then I have found the right band for you! Battlecross are a relatively new metal band from Detroit, Michigan who describe their sound as 'Blue-Collar Thrash'. Though they have been touring nationally for just under 2 years, they have indeed worked very hard to get there. The vibe of their music reflects this same attitude: full-force, all-out, never let up, never quit. Each song is packed with relentless power and technical prowess that demands to be recognized as a new force to be reckoned with in heavy metal. 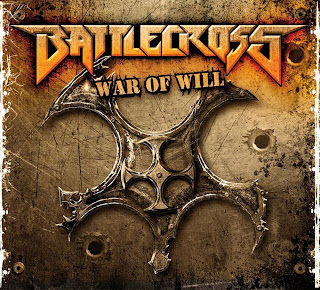 Their second album, War Of Will, is released today on Metal Blade Records, and it is sure to satisfy the craving of any extreme thrash metal fan for aggressive and technical metal. 'Force Fed Lies' is the first track of this all-out thrash-fest, and it starts the album off at a break-neck pace. Guitarists Tony Asta and Hiran Deraniyagala assault your ears with furious fretwork, driven by classic thrash-metal tonality. Vocals are screamed straight into you eardrums by Kyle "Gumby" Gunther. Tight grooves are maintained throughout by Don Slater on bass guitar and Shannon Lucas on drums. The tempo subsides slightly at the choruses to allow a catchy melody to guide the ferocity, then it's back to business for the next verse.

The next song 'Flesh and Bone', while still aggressive as hell, has a very impressive dual guitar solo at the midpoint of the song, showcasing the priceless talents of Deraniyagala and Asta. They complement each other like seasoned veterans, and why not? They've been jamming together since they were in their teens. Throughout the album they repeat this masterful teamwork while still taking the time to awe listeners with several top-notch guitar solos by each guitarist. In many ways Battlecross are the band that thrash purists have been waiting for for years.

Lyrically Battlecross are a band that focus on themes of empowerment, individuality, justice and self-betterment. Another favorite track of mine is 'Beast', where Gumby takes a few minutes to tell us of the virtues of working hard to better one's self instead of settling for the easy path or flat-out giving up. These themes can be found in many songs throughout the album, but they save the biggest epiphany for last with 'Never-Ending Night'. This song is about self-sacrifice for the benefit of the next generation. To learn form one's mistakes and pass on strength and knowledge to the younger generation is the take-home message. If you truly must fight a War Of Will, then this album will show you the path to victory, with plenty of headbanging along the way!

[Battlecross are supporting Rob Zombie and Five Finger Death Punch on Rock Star Energy Drink Mayhem Fest this summer. Check them out at a city near you!]
Posted by headbanger_71369 at 7:00 AM No comments: