Post #240
Tribute bands are everywhere. They are essentially cover-bands, but choose to focus on covering and paying tribute to specific artists. Often they will name themselves after a well known song, lyric, album or other theme easily associated with the bands they cover. I have heard of many of these kinds of bands over the years, but this was the first time I made it to an actual show since I began this blog. It was a great night of familiar tunes from some classic heavy metal artists. The tribute bands on this night: Lights Out, Judas Beast and Heaven and Hell-Chicago. The bands they were paying tribute to: UFO, Iron Maiden, and Black Sabbath/Heaven and Hell/Dio. 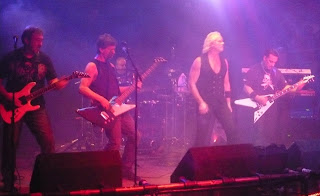 Lights Out were the opening act, and they hit us with some killer rock and roll riffs from UFO's back-catalog, as well as a couple Michael Schenker tunes! Their guitarist even played the Gibson Flying V (Schenker's signature style of guitar!) They opened up with 'Hot N' Ready' from UFO's '78 Obsession album. They kept the show rolling from that point on, squeezing 13 songs into their set as the opening act.

They changed things up from one track to the next, covering some power ballads along with the hard-rockers. About half-way through the set they switched to the Michael Schenker Group, covering 'Armed and Ready' and 'Victim of Illusion', among others. My favorite part of their set was the closing number 'Rock Bottom', which featured an extended guitar solo and instrumental jam! Lead guitarist Joe Mazzuca kept the audience captivated for several minutes during this closing number.

I've always felt that Michael Schenker is an underrated guitarist. For some reason he remains largely in obscurity from the mainstream perspective, as most of his following is relegated to 'cult' status. I feel he deserves more respect for his contributions to metal than he seems to get. Lights Out were paying some of that overdue respect, and did justice for these songs from UFO and MSG.

Next up was Judas Beast, prepared as always to deliver "The ultimate Iron Maiden experience!" 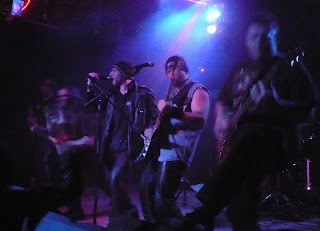 This show started with the spoken intro, "Seven deadly sins, seven ways to win..." and they kicked off the show with 'Moonchild' from the Seventh Son album. True to their word, they really nailed the Maiden sound! They even had a 6-man line-up, with 3 lead guitarists (just like the real Maiden). Added to this was singer Dane McCartney sporting an 'Eddie' stocking cap (similar in style to the ones Bruce Dickinson is known to wear during live sets). Immediately following that they jumped into 'The Evil That Men Do', and it was evident that we were in for a wild ride!

It could not go without notice that Dane had an uncanny knack to imitate the sound of Bruce Dickinson's voice to such a convincing degree it would fool many die-hard Iron Maiden fans. In fact, for much of their show I would forget that I was not listening to the REAL Iron Maiden, they sounded that good! I needed to remind myself that this was only a tribute band. However, they performed each song with such enthusiasm and power, I would be tempted to call them a world-class Maiden tribute band.

If you need proof, you can see and hear for yourself in this youtube clip of 'Infinite Dreams'.

My favorite song they performed on this night was 'Still Life', from the Piece of Mind album. More of an obscure song, it has long been one of my favorites. I find the mood and melodies so haunting in this song, it captivates my imagination. I had always hoped to hear Iron Maiden play it whenever I've seen them in concert, but I've been unlucky so far. I must thank Judas Beast for including it in their set. As they did with so many songs on this night, they nailed it! 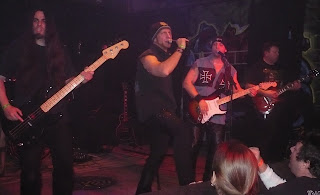 The band themselves seemed to be enjoying the crowd almost as much as we were enjoying them. They drew the audience into several moments of crowd-participation at every appropriate moment. The set-list itself was even a treat for the fans, as with each successive song it became apparent they were paying tribute to the Maiden England DVD, essentially re-creating that concert for the fans who knew of it. In the end only a couple songs were cut for time constraints. After all, there was still one tribute act left to perform...

...And then it was time for the headlining act: Heaven and Hell-Chicago! 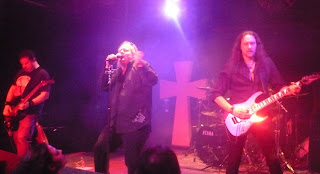 With a large, white cross gracing the stage, and stage-smoke wafting into the room, the signature instrumental  track 'E5150' was played as the intro, while the band members took their places on-stage. Then, almost without warning, they instantly electrified the room with a killer, break-neck riff, we were all pumping our fists to 'Neon Knights'! Through the ages, every incarnation of Black Sabbath has been known to always deliver on one element in their music: heavy! This band had their instruments perfectly tuned and mixed to deliver that aspect with authority.

Since Ronnie James Dio passed away from cancer in 2010, I have been listening to almost every era of his music with near-religious regularity. Now, I was hearing a band with that same level of admiration for one of metal's biggest icons, performing those songs with a dedicated passion that was apparent in every move they made, every note they played. When they played 'Holy Diver', and did the proverbial 'horns' salute, the crowd responded in turn. This cultural phenomenon, \m/, has taken on a new significance when bands perform the works of Dio. This crowd knew that significance, and showed the deepest respect.

Although their singer wasn't quite on the same level of imitating Ronnie James Dio's voice as Dane McCartney was for Bruce Dickinson, he did have the range to sing the songs very well, including several Ozzy-era Sabbath songs! Although Judas Beast were hard to top in terms of the imitation factor, where Heaven and Hell-Chicago really impressed me was their choice of set-list. Not only did they cover songs from both the Ozzy- and Dio-fronted Black Sabbath, but they also did a number of songs from Dio's solo material and songs from his stint with Rainbow! Myself being a huge fan of both sides of Sabbath, this was a set list I had dreamed of hearing. I've seen Ozzy in concert, and I've seen the real Heaven and Hell. Always, I had hoped against the odds to hear one artist go back to the forgotten eras and perform a song or two. I wish I could have heard Ronnie sing 'War Pigs', or Ozzy sing 'Heaven and Hell'. With Heaven and Hell-Chicago spreading their song choices across the whole Sabbath/Dio career, this was the next best thing! The only thing that could have topped that might have been if they played Ozzy's 'Crazy Train', but perhaps that's an idea for another day...

I've never heard a few bands deliver as many timeless classics of heavy metal music as I did on this night. From the often overlooked classics from UFO, to a page from the touring history of Iron Maiden, to the nearly complete retrospective of Dio, Black Sabbath, Rainbow, and Heaven and Hell, it would be hard to ask for a better combo of tribute bands in one night! Lights Out, Judas Beast, and Heaven & Hell-Chicago are all on facebook, and they play frequently in the Chicago area. Check out any of their upcoming shows, and you will be thanking me for the suggestion in no time.

For now, see what the show was like for us on the evening of March 15th...
Set lists were: 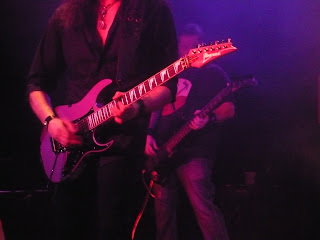 Slide show of extra pix from the show:

FIST TO THE SKY Interview

Post # 239
As is traditional, I take a moment to interview the Independent Band of the Year after they have won the reader's poll. I might be a little behind schedule this year, but I did finally get around to asking some questions of this year's talented winner: Fist To The Sky. Vocalist/Bassist Mickey Murder responded on the band's behalf. Here's what he had to say: 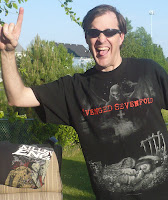 HappyHeadbanger: How did you guys form Fist To The Sky? 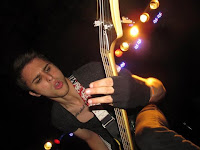 Mickey Murder: Flipp and I are brothers, so we've been playing together for as long as I can remember. After a couple years we started looking for a second guitarist. That search lasted about ten minutes, Haha! We called up our cousin, Hollywood, and he loved the idea of joining up. The three of us knew what we wanted to do, the music we wanted to write and we all loved writing together. We eventually became Fist To The Sky in 2008.

HH: And how did you come up with that name for the band?

MM: Actually the name came from a lyric in one of the very first songs we wrote for the band. We don't play the song anymore, but we loved the idea of a band name. To us it means strength, and standing together, which is exactly what we and our fans do. There's just something very uniting about it, and it fits the band perfectly.

HH: I hear similarities to Avenged Sevenfold in your sound and have drawn some comparisons in my reviews of your music. Is that similarity intentional or coincidental?

MM: They, as well as countless other bands, are a big influence. We don't model our music after anyone else's, we just write what we think sounds kick-ass. We make music that we love to listen to.

HH: What other bands do you consider as influences or inspirations?

MM: For the modern stuff I'd say bands like Trivium, Bullet for My Valentine, Disturbed, etc. And of course, the classics like Metallica, Maiden, The Beatles. You can learn something new every time you listen to them.

HH: What is the farthest from home you have played a show?

MM: The farthest show was in St. Paul, MN at a place called Dean's Tavern.

HH: Who are your favorite bands?

HH: What is your favorite movie?

MM: I'd have to go with Natural Born Killers. Classic.

MM: Harry Potter collection. Completely brilliant, doesn't matter who or how old you are.

HH: Do you have plans to play any shows coming up this Spring/Summer?

MM: Oh yeah! We are going to be playing with Bullet For My Valentine and Halestorm on May 22nd at The Rave in Milwaukee, WI. For ticket information just go to www.fisttothesky.com - This show will be off the hook! Some other plans are secret for the moment. Updates will be all over our website as well as our facebook page: www.facebook.com/fisttothesky very soon.

HH: Any concert tours you're looking forward to as fans?

MM: Device, David Draiman of Disturbed's new band, is going to be on tour this year, which should be a great show. I know I'll be there!

Thanks for giving FTTS this interview!

HH: You're very welcome! It sounds like you have an exciting summer planned ahead. Can't wait to see you guys live when I get a chance!
Posted by headbanger_71369 at 6:30 PM No comments: