The 1980's were a rough ride for Aerosmith. This decade saw the band break up, fall to new lows as they gave in to substance abuse, former members tried to launch solo projects, the band eventually reunited, committed themselves to rehab, got clean & sober, and resurrected their career in stellar fashion. Their '89 release, PUMP, was the cherry-on-top.

From my personal perspective, Pump was the first album the band released since I became a fan. Myself, like so many others of my generation, I thought I'd discovered a great new rock band, and would later discover that these guys had actually been rockin' since '73! Nonetheless, it was the songs from Pump that truly made me a fan for life. Aerosmith had found a way to thrive in the late 80's without selling out completely to the hair-metal fad, but more importantly, had gotten through rehab with their "band-of-brothers" mentality intact.

After their reunion, they recorded Done With Mirrors; a mediocre album where they pretty much went through the motions but had not yet gotten sober. Permanent Vacation was their first clear-headed effort in years, and reeled in a ton of new fans. Pump was the perfection of their new-found creativity, their crowning achievement of the decade.

My recommended songs from this hits-packed album:
-Love In An Elevator
-Young Lust
-F.I.N.E.
-What It Takes
-The Other Side
-Monkey On My Back
-Janie's Got A Gun
Posted by headbanger_71369 at 9:44 AM No comments:

Post #52
I need to point out a recent correction I've made to a previous post. I've made an amendment to my first post about Stone Sour when I reviewed "Come What(ever) May". I've left the original post as-is, but added a dated note explaining a mistake I made while reviewing the album the first time. I firmly believe nobody's perfect, and I'm no exception. I'm humble enough to point out my mistakes when I make them. Please forgive the inaccuracies I may have made, or might make in the future. I have no problem correcting myself. Let me know if you notice an error on my part. As much as I write this blog just for the fun of it, it'd be nice that it was also accurate!
;-)
later,
JAB
Posted by headbanger_71369 at 2:54 PM No comments: 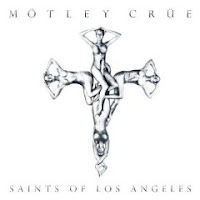 There seem to be many 80's heavy metal bands that are making a comeback in the last few years. Sometimes these efforts aren't all they're anticipated to be, but with Saints of Los Angeles, Motley Crue prove that some reunions are worth the effort. This album is a pleasant surprise for a previously dormant Crue-fan like myself.

The biggest positive about this album is of course the fact that it features the original line-up of the band: Vince Neil, Nikki Sixx, Mick Mars, and Tommy Lee. What's more is the fact that they have recaptured their classic sound & style in their music. The songs on this album sound like they'd fit right in along with classics like "Girls, Girls, Girls", "Kickstart My Heart", or "Shout at the Devil". Enough time has passed for the Crue, that rather than being criticized for reclaiming their 'old-school' sound they're being praised for it- and deservedly so.


The themes and subject material for this album also return to familiar territory. The fast-paced & reckless life-style of rock'n'rollers indulging in their excess & their fame are depicted in a semi-biographical context. As Nikki Sixx said upon the album's release, the band tried to write an album "loosely based on The Dirt", the band's juicy, detailed biography. The album plays like an 80's Glam-band's roller-coaster career.


For my picks from this great, return-to-form album from Motley Crue, try listening to:
-Face Down in the Dirt
-Saints of Los Angeles
-Animal in Me (For not having as many ballads as some of the late 80's Crue albums, this is probably the closest to a ballad you'll find on this album.)
-Just Another Psycho (This one really got stuck in my head while I had this CD checked out from my library!)