Post # 225
As tradition continues for the 'Independent Band of the Year' contest for this blog, I try to give last year's winner a final interview before the torch is passed on to the new winner. So I took a few minutes to send some questions to last year's champion, Mortal Wrath. The band's guitarist/songwriter Michael Kirby sent me his responses during some down-time he had over the holidays recently. Here's what he had to say:

HappyHeadbanger: Every musician discovers their love for playing music in different ways. Who inspired you to play music? 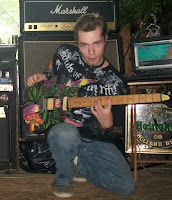 HH: How did you meet and decide to form a band?
MK: I met my drummer in August of 2008, through a mutual friend. 20 minutes after our 1st jam I was on the phone to quit the other 2 bands I was in at the time, to the birth of Mortal Wrath!

HH: What is your favorite song to perform live?
MK: Probably "Law Under Grace" or "The Single Projection"

HH: What is your favorite band(s)?
MK: Pagan's Mind and Dream Theater
HH: I've actually been on a big Dream Theater kick lately- playing a CDR I made of "The Twelve-Step Suite". Other favorite bands of mine: Megadeth, KISS, Black Sabbath.

HH: What is your favorite movie?
MK: Walk Hard!
HH: For me, I like thriller with a great twist: Se7en, Memento are a couple of my favorites.

HH: What is your favorite book?
MK: The Bhagavad Gita
HH: I'm always reading some kind of fiction. Really loved Patrick Rothfuss' Kingkiller Chronicles (The Name Of The Wind and The Wise Man's Fear). Can't wait for the 3rd and final book: The Doors of Stone.

HH: How has 2012 been for you, and what's in store for 2013?
MK: In 2012 the band had taken a pause to take care of our families but still keeping our chops up in our home studios. Myself, I've been playing more guitar than ever; learning excessively with countless ideas in my memory bank for albums worth of new material. The summer of '12 was indeed fun on my land in the mountains 7 miles from town, Marshall amp outside, feeling the acoustics of raw amp slap back off the trees... Countless hours of outdoor jamming! Entering 2013 with a new frame of mind and a new musical approach I want to experiment with. Expect one hell of a band return this summer!!! Back to music-life...

HH: Thanks again, to Michael Kirby, for giving us that update on this past year. Although it is time to pass the title of Independent Band of the Year on to the new winner, Fist to the Sky, remember that I keep up with all past winners of this contest. And as soon as Mortal Wrath are ready to deliver new music, you can rest assured you'll hear about it here first!

Holiday Wishes from Fist To The Sky, and the HappyHeadbanger

Not long ago I received a holiday postcard from the new Independent Band of the Year, Fist To The Sky. I'd also like to take a moment to wish all my readers a Merry Christmas, Happy Hanukkah, and a Happy New Year. Thank you again for all your support throughout another rockin' year of heavy metal appreciation. Keep following us in 2013!


FIST TO THE SKY 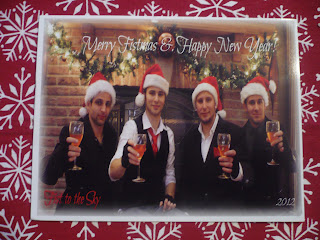 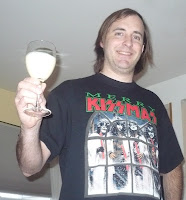 Post #223
As one final reminder, I want to mention that ROCK AMERICA have been an incredible sponsor for the 'Heavy Metal Madness 2012' contest that has been going on throughout 2012. One lucky winner of that contest will receive a $25 gift card to Rock America. In the meantime, they have tons of cool merch for the Heavy Metal music can on your holiday shopping list this year.

Here are just a few samples of what you can find at either of their locations at Gurnee Mills or Woodfield shopping centers in the north Chicago suburbs. I'll use the Final Four of Heavy Metal Madness as examples: 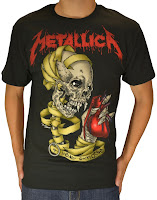 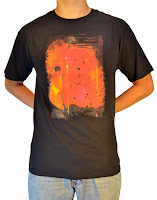 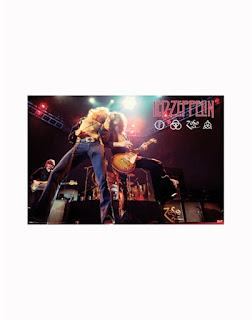 SYSTEM OF A DOWN 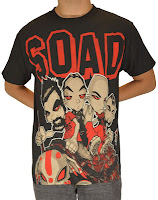 Congratulations FIST TO THE SKY! 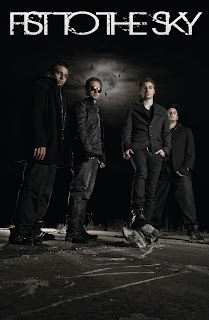 On Nov 30th, the polls for 'Independent Band of the Year' closed and Fist To The Sky became the new champion. Beginning on January 1st, they'll take over the side-bar link that's been occupied by Mortal Wrath for 2012. Fist To The Sky ran a successful campaign, recruiting their fans to vote them to the win. For a while the competition heated up when Indolent pulled ahead mid-way through the contest, but Fist To The Sky reclaimed the lead in the end.

I want to take a moment to thank all the bands who agreed to participate this year. Collectively they introduced www.happyheadbanger.com to over 400 new fans. Thanks to this year's field of independent bands: Shield of Wings, Tetrarch, The Atrocities, BaleScream, In Serenity, Indolent, and of course FIST TO THE SKY.

Watch for frequent new content about Fist To The Sky; including reviews, interviews, announcements of upcoming shows, and breaking news of their forthcoming EP...

For now, you can check them out at their upcoming all-ages show, opening for Janus at Another Hole In The Wall in Steger, IL THIS SATURDAY, Decemeber 15th at 7pm. Tickets: $12 at the door. 9 bands performing! For more info click here http://www.facebook.com/events/218416004957619/

Congratulations again, Fist To The Sky! Looking forward to good things from you in 2013...

Post #221
On November 19th, the second half of the Elite Eight of Heavy Metal Madness 2012 came to a close, and the FINAL FOUR of this tournament have been determined.

The Classic Rock bracket had predictably come down to Black Sabbath (#1 seed) and Led Zeppelin (#2 seed). It was a very close race throughout the month, and the 2 bands swapped the lead several times. The final vote was 21-19 in favor of Led Zeppelin; a decision truly decided by a single voter's opinion, since Sabbath held the tie-breaker. If one person had changed their mind in favor of Black Sabbath, then they would have advanced instead.

In the Alternative/Grunge/Punk bracket, it was a more surprising Elite Eight showdown: Alice In Chains (#5 seed) vs Soundgarden (#7 seed). However this match was far less of a contest, as AIC dominated their fellow Seattle-ites 28-7. Alice In Chains ties System of a Down for the lowest-seeded band to reach the Final Four.

Will top seeds dominate? Will chance favor the underdogs?!? We will find out by New Year's Eve! Vote for your top 2 of the Final Four. Voting is open until midnight, December 31st. So, cast your votes, share this site with your friends, and campaign one last time for YOUR favorite bands!

Now, the recommended songs for the bands now eliminated:

Soundgarden-Been Away Too Long
Posted by headbanger_71369 at 1:24 AM No comments: