Post #220
It seems there is never a shortage of talented local metal bands in Chicagoland. Approaching Dawn (A.D.) are a new band from the far-northwest suburban area that are tearing things up as of late. A recent top-three contestant in the Eff'n Rock Radio battle-of-the-bands, they are out to make a name for themselves in the Chicago music scene and beyond. Their self-produced debut album, Evolution Of Reality, is now available for purchase at www.CDbaby.com. A.D. hit you instantly with 100% aggressive metal on the lead track, '21st Century Darkside', and there's no letting up from there. Their style is a purist form of hard-edged thrash metal, very much akin to the likes of Lamb of God or DevilDriver. The tempo and riffs they employ are so tight you practically find yourself headbanging without noticing you had even started.

Vocalist Keroin Dawn emulates the style of Lamb of God's Randy Blythe, delivering lyrics with a rage held in perfect check. Though delivered with hardcore aggression, melody is not forgotten. Just when it seems the music is destined to be a one-dimensional riff loop, the band cuts to a melodic chorus. A.D.'s lyrics focus on themes that reflect on current times, and the struggles they provide. Whether the conflict is an internal struggle, or a venting rage at society's imperfections, you always feel the emotion behind the words.

There are a couple songs where A.D. take a few minutes to provide a melodic intro, before they return to their heavy, groove-driven formula. 'Copy of a Space', my favorite track, is one such song. Another is 'Madness Fable'. In any case, Evolution of Reality is a good collection of aggressive, riff and groove driven metal. Check it out on their Facebook Page and download it for yourself.

Recommended tracks:
-21st Century Darkside
-Evolution of Reality (This one has a breakdown riff that reminds of Pantera's classic 'A New Level')
-Victim Farm (Great guitar soling on this one!)
-Copy of a Space (Really cool intro. My favorite track!)
-Madness Fable (Another more melodic intro to a great, heavy song)
-Syndrome (Speedy, metalcore riffage here. Reminds me a bit of Bullet For My Vaneltine, or A7X)
Posted by headbanger_71369 at 12:34 AM 1 comment:

Post #219
Black Tide have been on my radar since long before their first album, Light From Above, even hit the market. I was lucky to see them on Ozzfest 2011 as a main-stage opener, and count myself a huge fan ever since. You may recall from my review of their first album that I thought they were a very talented, young band that needed perhaps a bit more direction to their style. What direction that might be was anyone's guess. 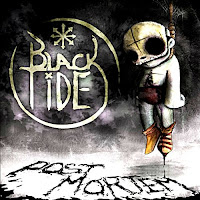 With release of Post-Mortem, they give us more direction. Listening to this album I can tell these guys have been spending time on tour with bands like Bullet for My Valentine, Avenged Sevenfold, Escape the Fate, Seether, and All That Remains. In the vocal department, Black Tide embrace a harsher approach on many songs. Hardcore screams are much more prominent on this album compared to their debut. Bullet for My Valentine's Matt Tuck even appears as a guest vocalist on the song 'Ashes'. However, melodic singing has not vanished either. A melodic vocal style is present in every song to maintain the band's catchy style they were so known for on their debut.

Not to be overlooked, they also add a few ballads on this album. Sometimes these are like a modern power-ballad, like 'Fight 'Til the Bitter End'. Others, like 'Take it Easy' are simply a romantic melodic metal song. The closing number 'Into the Sky', although the softest offering on the album, is really about mourning the loss of a loved one. A touching way to close another solid effort by these young metal-heads.

In any case these softer songs add a much-needed sense of variety into the mix for this album. Combined with the harsher elements in the vocal style, this is practically an all-together new formula for this young band. As I mentioned earlier, they may have been under the influence of their recent tour-mates while writing this album. Black Tide's sound has become more trendy as a result. While they might adhere more succinctly to the melodic-metalcore genre with this album, it comes at the expense of some of the originality they displayed on their debut. As hard as it is to survive in the music industry these days, I give Black Tide props for finding a niche they seem well-suited for. Still, I hold to my belief that they have not yet reached their full potential. This is truly a band to watch closely over the next several years. They could linger in this comfort-zone for quite some time, but they are equally capable of giving us something new and different, or old-school and classic on their next album. Wherever they may go, it is certain that Black Tide are well on their way to becoming a significant metal band of the current generation.

For now, lets enjoy the highlights of Post-Mortem while we can. Here are my favorites:
-Ashes (Featuring Matt Tuck from Bullet For My Valentine)
-Bury Me
-Honest Eyes (My true favorite on this release. Cool guitar effects, heavy and catchy)
-Fight 'Til the Bitter End (A heavy ballad. This song is so catchy it would make a great Bullet For My Valentine song, but Black Tide wrote it first...)
-Walking Dead Man (The heaviest song on the album. They're really taking a page from some of their peers on this one!)
-Into the Sky
Posted by headbanger_71369 at 5:02 AM No comments:

Post # 218
In Heavy Metal Madness 2012, the FINAL FOUR is just around the corner! Last month the first half of the Elite Eight was decided, and the second half is currently open for voting. Two more excellent bands were eliminated as two others punched their ticket to the Final Four...


The Classic Metal/Thrash bracket had come down to Metallica and Megadeth. Is it poetic, that Metallica- perhaps the most iconic band from the 80's thrash-metal scene, and Megadeth- the band founded by original Metallica guitarist, Dave Mustaine, clash once again for bragging rights in this tournament? It may have been a golden opportunity for payback for Megadeth, but it wasn't in the cards, at least not this year. Metallica won a decisive victory 20-15.


In the Hardcore/Metalcore bracket, a different story had unraveled, as many projected favorites had been slowly eliminated, sometimes by surprising upsets, as each round progressed to the next. It was down to Disturbed and System of a Down. Disturbed looked poised to make the Final Four, after eliminating a formidable opponent in Avenged Sevenfold. System of a Down had become something of a giant-killer, eliminating the likes of Korn and Tool by close margins. This time System of a Down pulled out a close match, again! Final vote tally: System of a Down 17, Disturbed 14.

Once again, I honor the fallen bands with a selected song from each...