Beyond De-th: Up and Coming Death Metal band in Chicago...

Beyond De-th are a death metal band that formed in Chicago back in 2012. Since then they have been steadily working on creating new music. By 2014 they had recorded 2 demos, a total of 5 songs. They have plans of a full length recording currently in the works. For now I'll summarize their previous demo recordings. 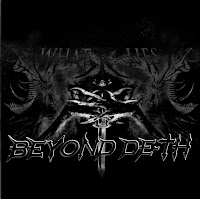 What Lies was the band's 2013 EP. Beyond De-th establish their formula quickly: Fast, heavy and technical guitar work, rapid-fire drumming, and guttural death-metal vocals. This early EP features three songs that satisfy a thirst for aggressive, high-tempo death metal for fans of the most extreme metal.

Burn His Eyes, the opening track is an all-out feast of furious metal. They keep the tempo at full-throttle for much of this song.

Beyond Death, the  second track, and their name-sake song, gives you an intro with a somewhat subdued mood, however they kick it back into high gear within a few seconds. Lyrical themes of world domination and dominance are prevalent.

Gods of the Sea is a true masterpiece of viking-themed death metal. In this regard they seem to take a page out of Amon Amarth's playbook. It actually works quite well for them. In fact I am tempted to compare them to Amon Amarth in many ways. They have a similar style and sound for sure. The singer's vocal tone is actually quite comparable. The guitar solos remind me of early Slayer, so the thrash element is alive here too. 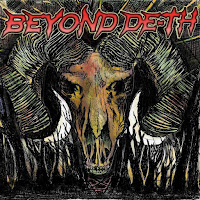 Beyond De-th, from 2014 is their 2-track self-titled EP. On this recording they continue the trend of blistering, thrash-infused death metal. These 2 newer songs seem a bit more polished. Granted this may be my listener's bias, but the lyrics and song structures seem a notch above their previous EP.

Death That Never Comes is a very thrash-driven song with a milder tempo... still fast by any standards, but slow enough to allow some layers of song structure to emerge. The vocals are still death metal guttural growls and screams, so that remains quite consistent from the What Lies EP.

Blood Beneath the Snow. This track is perhaps my favorite of them all. It opens with a clean-guitar melodic intro. Set in a minor key, the mood is still portrayed as dark. However it doesn't last long, and Beyond De-th quickly slip into their 'Amon Amarth-esque' style of riff-heavy death-metal.

Overall I find Beyond De-th to be Chicago's answer for Amon Amarth. Fans of that band will not be misguided here should they take my suggestion and listen to their music. You can follow Beyond De-th on their Facebook page, stream or download their music on Bandcamp, and catch them playing shows around Chicago's local scene. So go, download it, stream it, crank it, and bang your head!
Posted by headbanger_71369 at 1:28 AM No comments:

Scars of Armageddon are a traditional metal band out of McHenry, IL. They originated around the year 2011, solidified a line-up in 2013 and recorded their debut album independently. Last fall they were featured in my annual Independent Band of the Year contest and won, pulling ahead in the final days of voting. A bit later than intended, but well worth the wait, here is my review of their debut album... 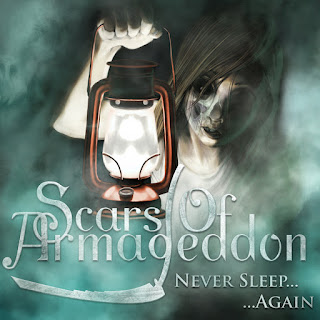 Never Sleep... Again is an album of power metal with a thrash edge. Immediately your ears are bombarded with chugging and galloping riffs at a fast tempo. The vocal style is reminiscent of late-80's NWOBHM style bands. There are plenty of guitar solos too. Shredding galore!

Although the fast and heavy riffs dominate the palate on this recording, the band does change things up with occasional melodic, clean guitar parts in a couple songs. These moments add a nice balance to their sound.

If I were forced to compare them to a known band, I'd probably say early Queensryche... like from their debut self-titled EP. 'Queen of the Reich' and 'Nightrider' are a couple songs I'm thinking of. Scars of Armageddon's own tracks like 'The Return' or the title track, 'Never Sleep Again' will fit right in with the likes of those...

Preview or download these songs and more at Scars of Armageddon's Bandcamp page!
Posted by headbanger_71369 at 11:33 PM No comments:

On Saturday April 30th, at Smiler Coogan's on Chicago's northwest side, 4 local Chicago bands got together to put on a kick-ass metal show (with a hint of punk!) Presented by Rebel Radio in conjunction with the venue, the 4 band line-up easily caught my eye, since I had previously reviewed works from members of 3 of the 4 bands, and only missed seeing the 4th band previously because I was out-of-state during Dame-Nation 2012. This was an excellent opportunity to see 4 bands at once, all of which I had interest in covering... 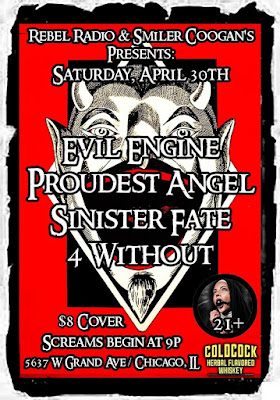 The opening act of the evening was Evil Engine, a 4-piece punk-rock act who are busy recording their debut EP. Their line-up features 2 members from Deadmanswake, previously reviewed here at www.happyheadbanger.com and a former Independent Band of the Year from 2010! 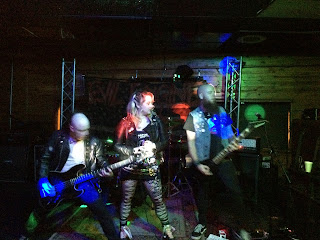 Their set was intense; packed with fast tempos and kinetic stage-presence in every song, they got me headbanging early! At one point their bassist even jumped into the crowd and kept on playing... They played many songs from this forthcoming EP, my personal favorite being 'Father', a demo track for which they made a lyric video previously this year. Another highlight for me was their cover of the Ramones' 'Pet Sematary', inspired by the Stephen King novel and film.

Next was Proudest Angel, a band featuring 2 members from Sutured Psyche, another band I've reviewed here before. 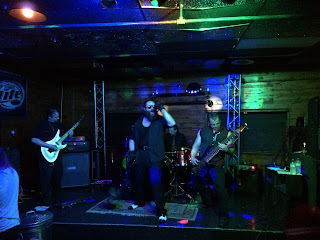 Although they are working on new material to be released soon, they are actually a re-tooled version of the band, and had recorded a couple EP's from 2000-2002. Their set featured mostly material from those early recordings plus a couple new ones. Their best number in my opinion was 'Whole Again', also available to hear in a youtube video.

Then came the dark and demented Sinister Fate! I had seen this band once before, and was looking forward to see what they had in store. They are known for incorporating a DIY-pyrotechnic display into their live sets, and this show didn't disappoint! They had two stage-dancers/performers who added a visually impressive spark-thrower display...
Their traditional metal/thrash metal style was easy to bang your head to, and they of course closed with their anthem to their favorite curse word: 'I Love to Say Fuck!', a cover of The Murderdolls song.
(**It should be noted that vocalist Dave Bates had been running a fever of 103 earlier in the day. In addition to delivering a great performance on vocals here with Sinister Fate, he ALSO played drums for Proudest Angel in the previous set! That is some true, heavy-metal style dedication to the fans of live music. Much respect to ya Dave!)

The last band of the evening was 4Without, a female-fronted metal band with roots from the Czech Republic. As I mentioned previously, they were part of the line-up for Chicago's female-fronted-metal fest Dame-Nation, a concert series I often covered here, however this was the first time I got to see them live. 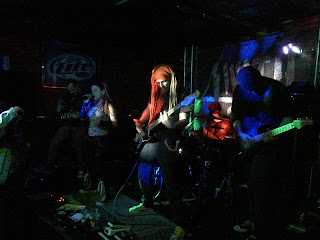 They delivered numerous tracks from their own self-produced CD, Line of Love. Their style is melodic metal, or heavy-hard rock. One highlight from their set was 'Move On'. Click the song title to see their youtube video for it!

Setlists for this night's performance from each band are as follows...

4Without Setlist:
Line of Love
Running Away
Sweet Bite
Territory
Desire
Personal Jesus
Where I Belong
Kill Him 1st
Move On
Life
Posted by headbanger_71369 at 11:31 PM No comments: