FIST TO THE SKY- DOWN INTO HELL (EP Review)

Fist To The Sky are the new Independent Band of the Year here at www.HappyHeadbanger.com, and as is traditional, I kick off the new year by reviewing their music. To start off with, I'll take a look at their 2-track EP, Down Into Hell. 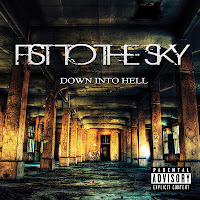 For only 2 songs, this CD packs a lot of punch! The first track, 'Another Lesson Learned', shows off plenty of lead guitars and a key-changing breakdown segment. The vocal delivery is melodic singing with a slight hint of some high-pitch screams. I am reminded of Avenged Sevenfold's M. Shadows with regards to the singing style. Heavy power chords and scaled guitar riffs take turns driving the rhythm of the song.

The other song is the title track, and it steps up the intensity a bit more. The lyrics are sung much quicker during the verses on this one, and guitar leads are sometimes delivered in tandem by both guitarists, creating a layered effect. All in all, a very solid effort by a young and promising band.

Fist To The Sky will continue to be a focal point for this blog throughout 2013. They have already begun work on their next EP, and if Down Into Hell in any indication of their true potential, then we will be in for a pleasant surprise before too long! Keep checking back and watch for more content about them!
Posted by headbanger_71369 at 7:00 PM No comments:

Post #231
Killswitch Engage are perhaps the most influential band of the metalcore/melodic metalcore genre, in part due to guitarist/producer Adam Dutkiewicz's prolific involvement as a producer for several other bands within this genre. In spite of his numerous efforts behind the production board, his top priority remains Killswitch Engage, and over the years this band has grown into an essential corner-stone for the metalcore sud-genre within heavy metal. 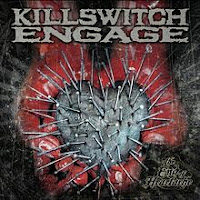 Their first album with Howard Jones as their lead vocalist was The End Of Heartache, and this, in my opinion, is one of the greatest defining works of the melodic metalcore sub-genre. Released in 2004, it truly displays mastery of a signature sound that other bands would come to emulate. Killswitch really took their sound to a higher level with the addition of Jones on lead vocals. His ability to sing clean melodies while maintaining a powerful vocal element, then switching to hardcore screams when the song calls for it, is a testament to the level of his talent. Few singers display as much control of both vocal styles as Howard Jones. Musically the band also expands their boundaries a bit on this album. There are still many songs based on heavy riffs, and catchy rhythms, similar to those on their previous album, Alive or Just Breathing, but this time around the musicianship seems of a higher quality. Softer, acoustic elements are a little more prominent too, and though they are used sparingly, they serve to enhance the listening experience and add a critical dimension to this album. 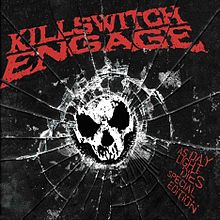 KsE's next release, As Daylight Dies (2006), was a strong effort again. Following the breakthrough success from 'Heartache', this album proves Killswitch were at the top of their game in the mid 2000s. This album features KsE's best ballad, 'My Curse', a concert favorite and successful single. As the band again flex their muscle with heavy riffs, and hardcore vocals, they keep the balance of soft and clean elements as even as they did on Heartache, if not more so.

If 'Heartache' was a cornerstone for the genre, then As Daylight Dies is the cornerstone for Killswitch themselves. I keep looking over the track list for this album, and I can't find a bad song. This is probably a snapshot of KsE at their creative apex. The title-track and 'This Is Absolution' have always been two of my all-time favorites from Killswitch. The special edition version of this album includes 4 bonus tracks and a DVD with 3 music videos (2 of which include 'the making-of' features). One of those bonus tracks is KsE's studio version of Dio's classic 'Holy Diver'... 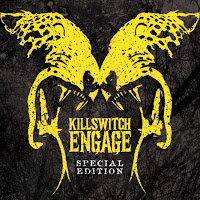 Their second self-titled album is one that came at a time when KsE had reached a plateau in their stylistic evolution. This album maintains a precise balance of their well-established melodic metalcore style. I cannot necessarily say this album brings any new elements to their sound that were not present on the previous two releases, but that is not to say this isn't a quality metal album- it is! Killswitch Engage was released with a special edition too, which included 4 bonus tracks and a DVD of interviews and behind-the-scenes footage.

This is a nice touch, and a good collector's piece for die-hard fans, especially since Howard Jones has since left the band, on good terms, citing medical issues combined with loss of enthusiasm. The DVD provides a snapshot of what the guys in the band are like off the stage, and how their personalities blend together. A nice way to see them together, still at the peak of their career.

Favorite Tracks:
-Never Again
-Starting Over
-Reckoning
-The Return
-A Light in a Darkened World
-I Would Do Anything
BONUS LIVE TRACKS:
-Rose of Sharyn
-My Curse
-Holy Diver
Posted by headbanger_71369 at 10:35 PM No comments:

Post #230
In the world of independent, D.I.Y., home-grown music, local bands come and go in the blink of an eye. Sometimes they are quickly forgotten, sometimes their members move on to new projects and re-form another band with a new formula, new line-up, new direction; other times they leave a lasting impression... 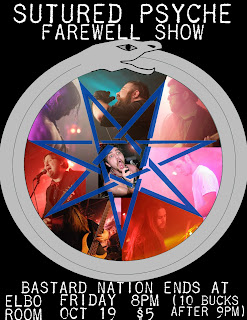 In the case of SUTURED PSYCHE, I feel they've left that impression upon their faithful following. For a band whose line-up went through a few changes over their 3 and a half years performing shows, they maintained a core of creativity and a consistent vibe and attitude that lived up to the motto for their music: "Music for Bastards".

On October 19th, 2012, the faithful of Bastard Nation gathered one last time, for one final show. The venue: Chicago's Elbo Room on the north side. Sutured Psyche: a band in flux, as the paths of life had pulled some members away, while other local musicians filled in, picking up the proverbial sword and carrying it into one final battle. A familiar face in Troll (former bassist for Deadmanswake), had rehearsed with the band on guitar, to compensate for original guitarist Adrian Mann, who had recently moved out of state. However, as fate would have it, Adrian managed to swing a trip back to his homeland, just in time to play this final show. The result was a truly one-of-a-kind line-up for Sutured Psyche. On this night they were armed with 3 guitarists (Adrian, Ryan, and Troll), plus the usual suspects of William Piamon (vocals), Brian O'Callaghan (bass), and Michael T Signal (drums).

Fans of the band filed in over the course of a couple opening acts, and by the time Sutured Psyche were ready to take the stage, there was precious little elbow-room to be had! It was showtime. They kicked off their set with 'Ma Gavte La Nata', an up tempo crowd charger for sure! The band was so pumped for this show that 2 of the guitarists collided on-stage after striking the first cord. They played on, barely missing a beat, regaining their balance and composure in a split second. And that was simply a precursor to the kind of mayhem that was in store this evening!

From that point there was no stopping. The fans latched onto the conduit of energy the band provided with their music.They thrummed along with the tempo for song after song. The audience was a cross-section of music lovers from all walks of life. Everyone there was living for the moment. Hell, there was even a guy in the crowd in a Spider-Man costume! 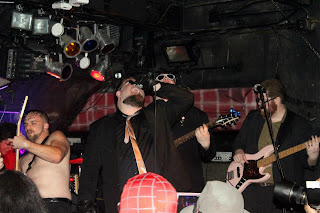 Said William Piamon of the webbed wonder's presence: "Go figure! We're the only Chicago band with a super-hero in residence."

The band delivered so many of their classic songs, many of which can be found on their CD Bastard Nation, or their live DVD None The Wiser. 'Codependent', 'Invocation' and 'Steven' come to mind as some personal  favorites. However, the guys had even more in store for us on this night, as they played an unexpected cover of Alanis Morissette's 'You Oughta Know'! Adding more power and energy to the vocal delivery, and making the song's heavy rhythm even heavier, these guys made this song their own!

The evening's biggest highlight had to be when they invited all their fans on-stage with them to jam along with the band. Easily half a dozen people joined the 6-member line-up on stage, playing chords and notes as best they could. It was such chaos, but at the same time so indicative of the relationship this band has with their fans: "We're one of you. You are one of us."


This evening was more than just a local rock band playing a set at a local venue. It was a celebration of three-plus years of camaraderie mixed with mayhem; celebration and tribute; a fraternity's family reunion; a reluctant coda mixed with an unending pride... Musicians. Rock Stars. Followers. Fans. Friends. A Nation. (and one Super Hero!)