Post #135
For this month's reader's poll, I'm making it a bit interactive with this post, where you can hear all the songs to compare, in case you're not familiar with them all already. Here you go!


Corrosion of Conformity with James Hetfield

1971 was an historic year for rock music. Iconic bands like The Who, Black Sabbath & Led Zeppelin were in their prime, and recording the best music of their careers. Several of the albums that topped the charts for hard-rock music that year, have become recordings of legendry status.

Perhaps the most lengendary, the most iconic, and most associated album from 1971 is Led Zeppelin's untitled fourth album. Sometimes called 'Zoso', or more often, simply 'Led Zeppelin IV', this album contains several of their best known songs. In particular, the song 'Stairway to Heaven' (which has won a poll on this blog by itself) became such a keystone song for a whole generation. To this day, songs from Led Zeppelin IV are standard plays on any classic rock radio station. The influence that this collection of songs has had on rock and metal music is inmeasurable.
Here is the complete track list for this essential album:

Post #133
Strych9Hollow are an independent metal band from St. Louis, Missouri whom I discovered on the Thrash and Burn 2009 tour. This tour featured a number of underground, hardcore & extreme metal bands, and was headlined by the melodic-death metal band Devildriver.

There were 3 stages with bands playing simultaneously. My friends and I migrated from one stage to another throughout the show. I first saw Strych9Hollow on one of these secondary stages. My ear caught on the heavy-yet-melodic riffs that were pumping out of the amps, while my eye was drawn to the frenzied, headbanging guitarist on stage right. They had a female guitarist that was tearing up the fretboard faster than she was headbanging (which was pretty fast!). The other guitarist delivered metalcore-style backing vocals, while their lead singer had a great ability to switch from melodic singing, to angst-driven screams. These guys (& gal), had all my favorite elements of metal music!

I made sure to grab a promotional sticker from the stage with their name & myspace website on it. Within days of the show, I was a regular listener on their myspace page, and began eagerly watching for a release date for a CD from them... 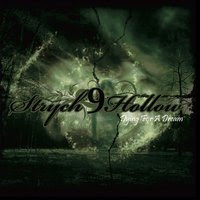 Their self-produced debut album is 'Dying For A Dream', and it was worth the wait! Hearing this band's official recording is a very satiating headbanger's experience. Their influences from hard-core metal to melodic, classic metal are apparent in their sound. Again, let me say that this is the kind of music I've been looking for! You could easily categorize them as melodic metalcore and they'd fit right in with the likes of Killswitch Engage, All That Remains, or August Burns Red. They are a talented bunch of song writers & musicians.

Though most of their songs are metalcore thrashers, they have a few melodic numbers that give 'Dying For a Dream' a balanced attack on your auditory senses. Fast or slow, Strych9Hollow's musical themes and lyrics tend to focus on the dark side of life, casting a haunting or melancholic tone with consistency.

So if you're looking for a fresh take on the melodic metalcore scene, with sound guitar work, good soloing, and balanced variety in vocals and songcraft, then Strych9Hollow may be the band you've been waiting for!

Here are my hand-picked favorites from Dying For A Dream:
-Art of Betrayal
-Beautiful Angst
-Schizophrenia
-Dying for a Dream
-Better Off Alone
-Death vs. the Escape Artist

Don't forget to visit their myspace page for streaming mp3's!
http://www.myspace.com/strych9hollow
Posted by headbanger_71369 at 12:24 AM No comments:

Post #132
I had heard of Shadows Fall a few years ago, but for some reason, never developed a true devotion to their music. I had picked up 'Of One Blood' on clearance, and was unimpressed. It seemed too 'death-metal' for my tastes at the time. I bit later I tried 'The War Within', which I also found used. I found this album much more appealing, but still wrote them off as a poor-man's Killswitch Engage. I listened to this CD a bit more than the previous one, but still lost interest after a week or two. 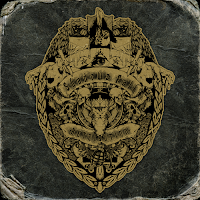 Then, in late '09, came the turning point when I scanned their newest album, Retribution, at a bookstore sampling station. I heard the intro track, 'The Path to Imminent Ruin', and was instantly hooked. My eyes widened at the difference I heard on this recording. Each track seemed like polished perfection compared to anything I had heard from them previously. I hesitated no further, and added this to my purchase.

For the next several weeks, listening to Retribution became a near daily ritual for me. This album had instantly become one of my favorite releases of the year. Shadows Fall can hit you with heavy, thrash style metal, but an instant later will slip into a clean melodic segment. Brian Fair's vocals can scream like metal-core, growl in a deeper near-death-metal style, or sing in classic melodic-style ranges. Again, some of these elements were present on their older releases, just not to the degree of quality that I hear on this release. Retribution seems to strike the perfect balance of elegance and brutality.

Not to be overlooked is the guitar soloing on this album. Lead guitarist, Jonathan Donias, tears up the fretboard with a classic, shredding guitar style that would make the likes of Marty Friedman, or Glenn Tipton jealous. To be honest, this is my favorite element of their sound. Each track I look forward to hearing what the guitar solos might have in store. The quality of guitar work on this album is enough that I want to eat my words from my previous comparison to Killswitch Engage, for I now feel that Shadows Fall are much better at the art of the guitar solo!


From the acoustic intro of 'The Path to Imminent Ruin', they fade into 'My Demise', one of the heaviest tracks on the album. From there it just gets more intense, as almost every track rips your eardrums with ferocious heavy riffs. They even have a cover of Bob Marley's 'War', but if it weren't for the lyrics, I wouldn't recognize it for the over-the-top intensity with which it is delivered! There are a couple tracks that do focus on the melodic side of Shadows Fall, 'The Taste of Fear' and 'Picture Perfect'. These songs really help make this album a complete, and well rounded metal experience.

If you've been on the fence about Shadows Fall as I have in years past, then I highly recommend listening to Retribution. They've raised the bar significantly on this album. Here are my suggestions to help guide you:
-The Path to Imminent Ruin
-My Demise
-Still I Rise
-War
-The Taste of Fear
-Picture Perfect
-Dead and Gone

Post #131
You may recall my review of Losing Scarlet when they won the reader's poll for unsigned bands on myspace.com back in '09. Well, shortly after they won that poll, I had the pleasure of seeing one of their live shows, as they played a small venue in my area along with 4 or 5 other local bands. It was an excellent show!

The venue was Durty Nellie's in Palatine, IL. I made sure to arrive early so as not to miss Losing Scarlet, as they were scheduled as the opening act. While waiting for the show to start, I wandered around the floor and looked over some of the merchandise for sale. Besides Losing Scarlet, a few other bands had music for sale. I picked up a free sample from one of the bands (Inn Cinema). Then I got a drink and waited for the show to start...

Losing Scarlet came out and got the night rolling with 'On Display', one of my favorite tracks from their independent debut album. Scott Haith led out of the gates with the thrashy riff, then the band joined in, followed soon by Jodi Kell's emotional vocals. Having listened to their CD several times, I was pleased that I recognized most of the songs. They delivered near-flawless renditions of their recorded songs. As I have mentioned before, they're like a blend of Disturbed's heaviness, and vocals similar to Evanescence or Lacuna Coil.

They played a good long set of their self-described 'pretty metal'. Scott jamming out killer riffs on guitar, Petra Sith providing melodic bass-lines and backing vocals, Conor McCann drumming intensely, and Jodi singing lines that were sometimes sexy, and other times cathartic. Most of the songs were from their self-titled debut, but they had some surprises in store for me and the rest of the audience, as they played a number of new songs, presumably to be included on their upcoming second album 'Learning to Bleed'. One particular treat was their cover of Blondie's 'Call Me'. It turned out to be a real crowd-pleaser, and got more people active in the crowd.

They closed their set with 2 of their new songs, including one that has become the title track for their upcoming 2nd CD, 'Learning to Bleed'. I was a bit sad that their set was over already, but a great night of music was still in store. Next up was Inn Cinema, who played a bit more aggressive style of music, but still with catchy melodies. Other bands I recall were The Crossing, and Beyond the Red. A great night of music through and through.

1-29-10 Durty Nellie's Losing Scarlet setlist:
-On Display
-All I Am
-Left to Burn
-Shameless Prayer
-Call Me (Blondie cover)
-With This We Fight
-Shade of Hate
-Learning to Bleed
-Inclusions
Posted by headbanger_71369 at 1:10 AM 2 comments: