Post #289
Set to Rise are a British metal band from Kent, England. Delivering their own brand of metal that is inspired from alternative metal, hardcore and punk; this band is out to make a statement and leave their own mark on the metal scene. They recently released a self-titled EP featuring three studio and two live tracks, providing a nice overview of their sound and style. 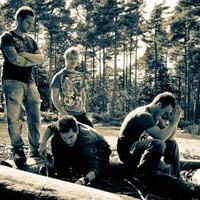 The EP opens with some clean guitar melody that quickly transitions to a groove-laden heavy riff. When the vocals kick in, they are infused with an aggressive edge, but not screamed so rough as to be unintelligible; this band's music has a message, and they don't want it to be missed. Political criticism, and calling out of dishonesty are a few of the themes one can find in their lyrics. Their singer delivers the message with raw emotion and a sense of urgency.

Musically their tones and song structures initially reminded me of Motorhead riffs mixed with a late-80's punk vocal style. After a few more listens an influence from alternative metal bands such as Rage Against the Machine and Papa Roach came to mind. There are some hints of thrash and groove metal in places, while lead guitar solos keep a classic element present in their formula as well.

Set To Rise may sound a little bit like many of their influences, but exactly like none of them. They take their influences and meld them into their own sound. They have a lot of potential, and I'm curious to watch how their music will develop over the next few years.

I'll leave you with an annotated summary of each track from their self-titled debut EP.

-Because of You. With the clean guitar intro this song almost has a post-grunge feel, until the heavy riffs kick everything up a notch or two. This song's main riff is addictively catchy, enticing one to bang their head. A killer guitar solo gives the song a finishing touch.

-Lost. This one is a more intense, more hardcore type of song. It thrashes along with a higher tempo and more aggression than any other track on this EP.

-Forgetting Me. Set To Rise list Rage Against The Machine as a major primary influence on their social media pages, and this track shows that influence the most on this EP. As the centerpiece, this track may be most indicative of their chosen direction in metal.

-Taken (live). This song has a solid groove, and gives you a hint of what the band is like live. There is a certain raw quality of the live recordings, but they also deliver a snippet of another side of Set To Rise. Recordings can capture a band's talent, but a live performance tells you more about who they are, and you can really hear between the lines and feel their ambition and drive.

-Sleep Now in the Fire (live- Rage Against The Machine cover). Set To Rise really take their biggest influence from Rage Against The Machine. It's not surprising they choose to cover one of Rage's songs on this EP, and the live performance captures their intensity all the more. They give this song proper justice, while honoring their primary inspiration at the same time.

This debut EP is a pretty diverse sampling from the three studio tracks, and the two live tracks are a huge plus! Follow Set To Rise on facebook and don't miss a chance to download these tracks, currently available as free downloads.
Posted by headbanger_71369 at 12:05 AM No comments: