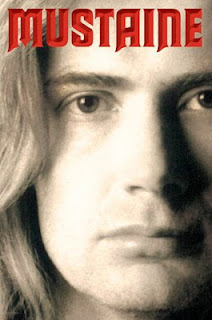 Last year the legendary Dave Mustaine released his autobiography, Mustaine, with Joe Layden. Given the folklore behind Dave's life, with the time he spent as a member of Metallica, to his controversial exit from that band, to success and struggles with his own band, Megadeth, this promised to be a very captivating read for any die-hard heavy metal fan. After reading it myself, I have to say it exceeded all my expectations! Not only do you glean a better understanding of how Dave has persevered through the turmoil of substance abuse, and phases of instability with his band's line-up, but you also get a glimpse into his childhood, teenage years, and the primordial stage of Metallica in the early 80's.

What really went down on the long road-trip from San Francisco to New York that led to Dave's ouster from Metallica? What artists and musicians were Dave's inspiration to pursue a career in heavy metal music? What was his family life like? What was the real reason behind the firing of Chris Poland and Gar Samuelson? Who's decision was it for Megadeth to push for a more popular sound in the 90's? Has Dave made amends with any of his numerous former band-mates? What was Megadeth's best-selling album? Who prevented Megadeth from earning a #1 Billboard album? Will Mustaine ever record music with Hetfield and Ulrich again? Is Dave really clean and sober today? If you want the answers to these questions and more, all you have to do is read MUSTAINE. The book will not disappoint!

True, there are several rock stars who have had many ups and downs, but in Dave's life the ups are pretty high, and the downs are pretty severe as well. All the stories from his dark, black past, and the back-stories most of the chapters in Megadeth's history are captured in honest, detailed reminiscence, and presented in this biography. It reads so well you'll be mostly finished with the book before you know it! As the book concludes, you have a fresh perspective of exactly where Dave Mustaine came from, what the state of Megadeth really is, his true feelings towards former band members (both in Megadeth AND Metallica), and what the future might hold not just for Megadeth, but also the man behind the heavy metal titan: Dave Mustaine.

Some songs that have inspired Dave Mustaine through the years:
-Bad Motor Scooter by Montrose
-Detroit Rock City by Kiss
-Breadfan by Budgie

Some key Megadeth songs that already tell you a little bit of the larger story you'll find in the pages of MUSTAINE:
-Mechanix
-Set the World Afire
-Skull Beneath the Skin
-In My Darkest Hour
-Skin O' My Teeth
-Victory
-Tornado of Souls
-Sweating Bullets
-13 (I know this song was not released until AFTER this biography came out, but as a biographic themed song, it makes sense on this list.)
Posted by headbanger_71369 at 2:22 AM 1 comment:

Post #191
As February passed, and Winter gave way to an early spring, voting here at www.happyheadbanger.com continued for the bands in Heavy Metal Madness 2012... We saw more decisive victories, upsets and close contests in the second month of voting. Many favorites are one step closer to the coveted title of 'Best Heavy Metal Band' for this blog. Here's a break-down of the voting results for Round 1, Part 2!


Now for my recommended tracks for those bands that are now eliminated from this contest:
The Who-'Won't Get Fooled Again'
Aerosmith-'No Surprise'
Alice Cooper-'Poison'
Def Leppard-'Armageddon It'
Slipknot-'Snuff'
DragonForce-'Through the Fire and Flames'
Children of Bodom-'Needle 24/7'
Trivium-'A Gunshot to the Head of Trepidation'

Keep checking in at this blog, and voting for your favorite bands! Tell your friends and fellow metal-heads to check out this competition too! The more votes we get, the more validity is attributed to the results!
Posted by headbanger_71369 at 7:13 PM No comments: