Foredoomed are a melodic death metal band from Joensuu, Finland. They have a very diverse style of death metal that incorporates elements of power metal, progressive rock, ambient rock, and symphonic metal to name just a couple. The best known band I can think to compare them to may be Amon Amarth, but they offer so much more. 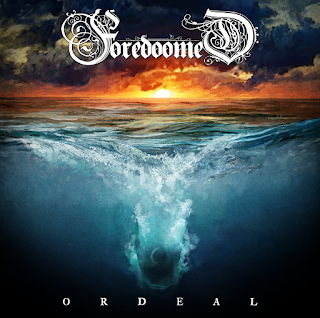 Ordeal is their debut album, and after listening to it all the way through, I am blown away by the quality of production and mixing that is evident on these tracks. Their intro track 'Origin' is a beautiful, symphonic metal track with melodic female vocals provided by a guest musician, Mia Rouvinen. Then they hit you with 'Ghost Recurrence', a more aggressive thrasher, and it changes the game as vocalist/guitarist Atte Kymalainen proceeds to show you what he can do. Death metal growls dominate for much of this song, but elegant melodic vocals come into play for the last minute or so of the song. By now the listener knows what the band is capable of, and the rest of the album explores each element further.

I first tried to listen to Foredoomed as a death metal band that has incorporated melodic elements and styles of power metal and symphonic metal into their sound. The more I thought about it, however, that seemed like a lot of things to incorporate into a death metal pallet of sounds. Then I stepped back, reconsidered, and found that a better description is perhaps a progressive power metal band with a heavy infusion of death metal style vocals. I found this to be a more comfortable context to appreciate their musical diversity, so that is how I shall refer to them.

While the vocal are indeed mostly death metal growls and screams, with deep guttural tones and ear splitting shrieks, they do incorporate a significant amount of melodic, and operatic vocals too. The musical formula that drives the band's sound it truly melodic in focus. Don't get me wrong, they are still brutally heavy and have moments of pure death metal ferocity, but there are lead guitars overlaying melodic phrases every time you turn around. There is also a near-constant presence of keyboards and/or synthesizers that serve to fill the sound, even in moments when they may be so overpowered by the grinding riffs you hardly notice them.

Foredoomed are a truly talented melodic death metal band. They incorporate such a balanced and abundant amount of melodic, progressive, and ambient elements that I do argue they are more a power metal band that incorporates death metal elements than vice-versa. Ordeal as an album, is a masterpiece of this infusion of metal formulas. I can't get enough of it! If you are a fan of Amon Amarth or even more traditional European power metal bands like Sonata Arctica then you will find much to like with Foredoomed!

Recommended tracks from Ordeal:
-Ghost Recurrence
-Search for Tomorrow (My personal favorite! Love the lead guitar melody and theme that recurs throughout this song.)
-Dualism
-Shade of the Darker Sun

Motley Crue- Shout at the Devil

Motley Crue released their first album in 1981, but it was their second album, Shout At The Devil in 1983, that solidified their status among the developing Los Angeles "Glam Metal" scene, as well as establishing their trademark sound. 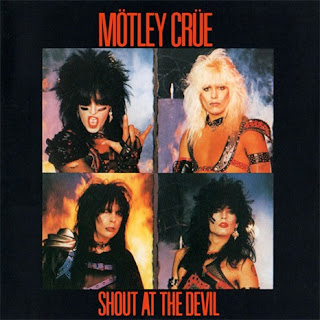 This album has stood the test of time with die-hard Crue fans for its level of grit, power, and consistency from track to track. Shout at the Devil yielded 4 singles and 2 music videos, which served to make the band a regular presence on both hard rock radio stations and MTV in the early 1980's. It wouldn't be until seven years later with 1990's Dr. Feelgood that the Crue had another album with more than 3 singles.

After Shout at the Devil, Motley Crue gradually pushed for a more marketable sound, and steadily included more and more ballads on each successive album. This made them accessible to a wider fan-base. This was all well and good for a 'hair metal' band seeking global success, and almost every band from this era did the same. But for new fans seeking to discover the darkest, grittiest, heaviest, and also one of the best albums Motley Crue ever recorded, you need look no further than Shout at the Devil.