The Hu are a Mongolian 'folk-metal' band that have gained much attention since they had 2 music videos go viral in late 2018. They describe their genre as 'Hunnu Rock', and really stick to their roots, using traditional Mongolian instruments like the Morin Khuur (aka “Horse-Head Fiddle") and the Shudraga (a Mongolian 3-string guitar). They incorporate just enough drums, bass, and backing guitars to cross-over into the rock or metal genres. Not to be overlooked, they employ the native Mongolian throat-singing vocal style. It truly must be heard to be fully appreciated. A very cool sound, and it lends itself well to the rock and metal style. I can’t wait to hear more from this band!

I was very fortunate to see them on their first tour through the US in support of their debut album ‘The Gereg’. It was Friday the 13th of September this year, the very day their album “The Gereg” was released! A friend and I made the short trek from the northern suburbs of Chicago up to Milwaukee, made our way to the Rave and prepared to hear this new band exhibit their music for our enjoyment. 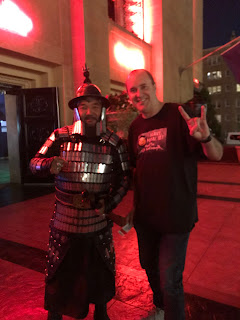 Even while entering the venue there was a unique vibe to this show. Their was a guy outside dressed in what I presumed was a traditional Mongolian warriors uniform. He was open to posing for photos so we did. I’m still not sure if he was with the band, their road crew, or just a local guy dressing all-out to support the show and Mongolian culture, but it sure was cool! Inside, we found the merch booth and each collect an autographed copy of “The Gereg”!

After a short opening set by a DJ that played some digital music, they set up the stage for The Hu. Moments before it seemed they were schedule to come out the restless crowd took up the chant of  “HU! HU! HU!...”

The Hu took the stage with their Morin Khuurs, Shudraga, drums and a couple backing musicians with guitar and bass. A brief  “Hello. Milwaukee!” brought a welcoming cheer from the crowd and they began their opening number, “The Same”. It was a slower mellow number but with pleasant melodies and a nice groove. Next they played the title track from their debut album “The Gereg”. It was a little more upbeat and you could feel the crowd getting more into the music with each measure.

Another song from their album they played really got the crowd rocking out. That song was “Shoog Shoog”. They’ve since released a lyric video for it. Another very catchy tune was “Uchirtai Gurav”- this one I managed to film a long segment of, and I still enjoy listening to the clip I have: it has a great throat-singing solo by Gala in it. Check out the link!

During the majority of the show the singer would speak to the crowd in Mongolian. The crowd responded enthusiastically, as a fair percentage of those in attendance appeared to be Mongolian as well. My friend and I cheered along anyway. It was the spirit of the moment! It wasn’t long until they played their 2 songs from their viral music videos: “Yuve Yuve Yu” and “Wolf Totem”. If you have not seen either of these music videos you’re missing out. Here is a link for Wolf Totem.
Their closing number was a really heavy, rocking tune! They actually announced this song’s title in English, “This is the Mongol”. It proved to be one of my favorite songs of the evening. Many of these songs are surfacing on YouTube as fan-filmed concert footage, but I sincerely hope they record some of these other songs on their next album.

The concert seemed to be over, but after about 5 minutes they came out on stage again! The crowd cheered for an encore. They proceeded to play their video hits, “Yuve Yuve Yu” and “Wolf Totem” a second time, closing with raucous cheers by the crowd and a humble, appreciative bow from the band.

Soon after the concert I created a set list on setlist.fm, and added the tracks I knew from their album, in roughly the order I could recall them. Not understanding any of the Mongolian lyrics didn’t help, but thankfully my friend and I had taken several video clips during the show and we matched titles to the melodies we recognized. Several tracks seemed to not even be on their album, but since creating the set list other users have filled in most of the gaps. If you attended the Milwaukee show for this tour, here is the set list link:
https://www.setlist.fm/setlist/the-hu/2019/the-rave-ii-milwaukee-wi-339cfc19.html

Set list for The Hu
-The Same
-The Gereg
-The Song of Women
-The Legend of Mother Swan
-Uchirtai Gurav
-Shireg Shireg
-Bii Biyley
-Yuve Yuve Yu (linked to my video from this show!)
-Wolf Totem
-The Great Chinggis Khaan
-Black Thunder
-This is the Mongol
——
-Yuve Yuve Yu
-Wolf Totem

Feel free to login and edit if you have a better recollection of the song sequence!

Happy Headbanging everyone!
And thank you to The Hu, for touring the USA! I hope it has been a wonderful experience for you, and I look forward to seeing you in concert again someday.
Posted by HappyHeadbanger at 2:05 AM No comments:

Welcome to the 2019 Independent Band of the Year readers poll! This year marks the 11th annual contest for HappyHeadbanger.com. I want to thank all the bands participating this year for agreeing to be part of this contest. Please, after previewing music from the bands that interest you, click the link above (or at the end of this post) to cast your votes! Without further delay, let me introduce this year's contestants and give you a brief description and some song suggestions for each of them... 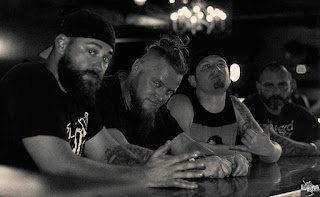 So Called Saints are a hardcore metal band form Rockford, IL. They fuse heavy riffs, rich bass tones, electronic elements, and a show-no-mercy hardcore scream into a powerful, bone crushing sound sure to make metal heads mosh. Serving up brutality with a full-spectrum sonic production quality rarely heard of, this band will get your head banging and your ears bleeding!
Check out their songs:
-Seven Deadly (youtube)
-Monsters N Madmen (youtube-lyric) 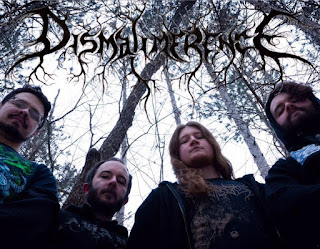 Dismalimerence are a black metal band form Chicago, IL. They give you the expected black metal shrieked vocals, yes. They deliver blistering tempos that would challenge any drumsticks’ integrity, true. However they also give you melodic breakdowns with acoustic guitars and clean melodic transitions. They build back up to their expected intensity, seamlessly blending progressive elements into their dark and haunting sound.
Check out their song:
-Sequestered Hearts (youtube)
-Sequestered Hearts (bandcamp audio) 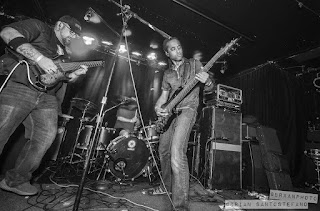 Sons of Ra are a progressive rock/jazz fusion metal band from Chicago, IL. They embrace the free and open jazz structure and blend the guitar soloing, heavy riffs and jazz beats into instrumental jams that satiate the cerebral music lover, and give the emotional outlet that metal heads crave. To get a taste of their esoteric formula there’s just one thing you need to do...
Check out their songs:
-AntiFragile (youtube)
-Persona Non Grata (bandcamp audio) 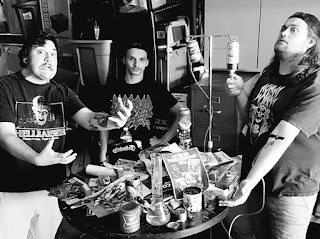 Molder are a death metal band form Joliet, IL. They actually describe their genre as “pus-riddled death metal” to be accurate, and the description holds up to their sound! If you like your death metal filled with picturesque visions of gore and horror, then Molder is the band for you! They have harsh, mid-range guttural vocals, heavily distorted guitars (of course), but do utilize a variety of tempos to grind your guts out quickly or slowly.
Check out their songs:
-Condemned to the Catafalque (youtube)
-Necrobiome (bandcamp audio) 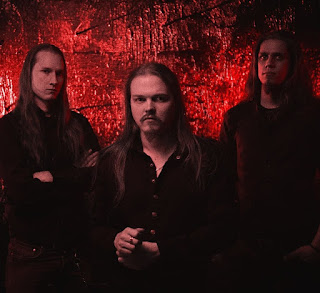 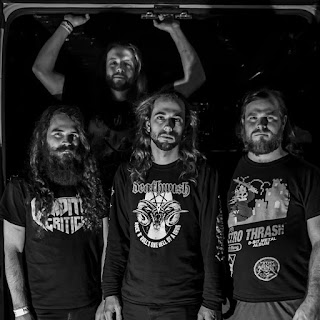 Toxic Ruin are a thrash metal band form Sheboygan, WI. They don’t kid around, keeping the riffs heavy, the pace break-neck, the vocals screamed out with fervor. Very technical riffing and blast beat drumming galore. If you utilize metal music for emotional venting, or workout pacing, or just glorious head banging, then Toxic Ruin is your band of choice.
Check out their songs:
-Mental Atrophy (bandcamp audio)
-Insolent Obsession (youtube) 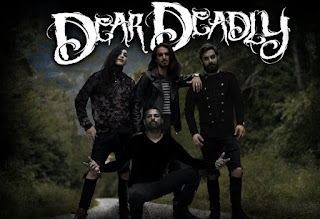 Dear Deadly are an alternative metal band form the Chicago suburb of Willowbrook. Fast and catchy riffs permeate their formula. Guitar solos showcase their talent and a scratchy melodic voice delivers their edgy yet beautiful metal music. This band has a fast and heavy sound with hooks around every corner. To hear their grit and grace in harmonious action...
Check out their songs:
-Deviant (youtube)
-Very Wicked Things (bandcamp audio)

Please click this link to cast your vote:
2019 Independent Band Poll
(previewing songs or videos DO NOT COUNT AS VOTES!)
The poll closes at midnight on Sunday, November 17th, 2019!

Posted by HappyHeadbanger at 11:30 PM No comments: