Post #252
(Performed on June 9th, 2013)
Orion Music + More featured a wide variety of rock and metal music but Cauldron, the first band I saw on day two, were unique among them all. I had seen a couple punk rock bands, a couple death metal bands, and, of course, 'dehaan', but Cauldron played such a pure form of classic heavy metal that they defied any further categorization. I had read up about them since I knew that I would be attending Orion Fest, and after seeing a couple of their music videos, they jumped to the top of my 'Must See' list.

Cauldron was formed by singer/bassist Jason Decay and guitarist Ian Chains after Decay's previous band Goat Horn disbanded in 2006. Drummer Myles Deck joined Cauldron right before they recorded their latest album, Tomorrow's Lost. The style of heavy metal Cauldron plays is very heavily influenced by the New Wave Of British Heavy Metal era of the late 1970's and early 1980's. They utilize a stripped down approach to recording their music: straight forward electric guitar, heavy bass, and a hard and heavy drum beat. If you are a fan of the early works of bands like Iron Maiden, Raven, Judas Priest and Venom, then you need to check out Cauldron as well. 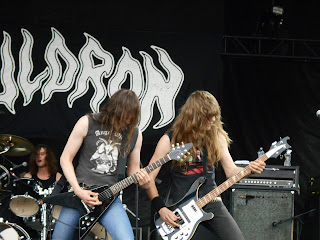 They started their show with 'Frozen In Fire' from their 2011 album Burning Fortune. Defined by a heavy, chugging bass line, mid-tempo power chords, and a great guitar solo, this song got the crowd headbanging off the bat. Decay and Chains had a classic heavy metal stage presence, often standing next to each other at the front of the stage to do some synchronized headbanging. At each appropriate moment one or the other would take center stage for a spotlighted guitar solo or bass riff. 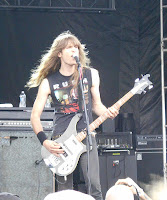 For the next several songs, they focused on selections from their new album Tomorrow's Lost. Among these was 'Nitebreaker', a fast and heavy 5-minute masterpiece of speed-driven classic metal. Decay's vocals carried the melody of this song, with a few well placed screams for good measure. 'Nitebreaker' has a killer guitar riff  that really got the crowd's adrenaline pumped. Next they played 'Summoned to Succumb', a slower but heavier tune. Drummer Deck provided the solid backbone of this song- a relentless heavy beat that had the crowd raising their devil-horned fists high. Chains added a memorable guitar solo to make 'Summoned to Succumb' one of their most enjoyable live performances.

Near the end of their set, they played a cover of Venom's 'Die Hard', a true gem from metal's early days. This got more people on the fringe of the crowd involved and plenty of headbanging followed. They closed their set with 'All or Nothing,' perhaps their best known song. The lyrics focus on seeking the best things in life and not settling for less. It was also a very fast tune with rapid-fire drumming and furious fretwork on guitar. The crowd enjoyed it to the end with a renewed energy. 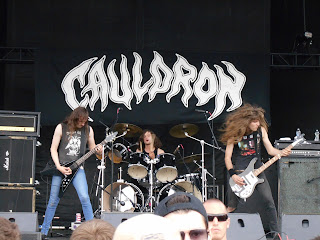 Every aspect of Cauldron's show, from the music to their appearance and stagecraft, reminded me of the kind of classic metal I grew to love in the first place. Classic heavy metal has become a bit obscure over the years, as new bands seem to follow current trends or try to branch and blend genres and sub genres. Cauldron seems to represent the bones of what these newer styles have grown out of. If you were to put all of heavy metal into a pot and boil away all the excessive effects until only one style remained, what you'd have left would be Cauldron. They proved with their live performance what all heavy metal fans know deep down inside- pure metal will never die! 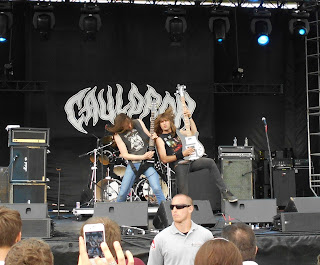 CAULDRON'S Set List from June 9th, 2013:
Frozen In Fire
End Of Time
Nitebreaker
Summoned to Succumb
Rapid City
Burning Fortune
Miss You to Death
Die Hard (Venom cover)
All or Nothing
Posted by headbanger_71369 at 1:05 AM