Red Hot Chili Peppers-Live!
(Performed on June 8th, 2013)
As the afternoon drew late on the first day of Orion Fest, the crowd grew thick around the Orion Stage. The Fest's first headliner, the Red Hot Chili Peppers, were about to take the stage. It was going to be interesting seeing them play at this fest created by Metallica, for the Chili Pepper are more identified as an alternative rock band, rather than a metal band. However, it seemed to be part of the point Metallica meant to get across, that Orion Fest was more about good music of all genres, rather than just heavy metal music. If my impression from previous acts of day 1 were any indication, the people were getting it, and enjoying every style of music as much as the next; so it was no surprise to me when they took the stage to a raucous applause a few minutes later. 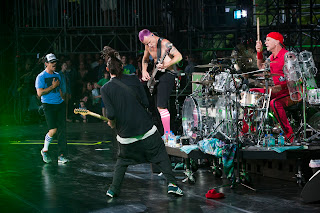 First on stage was drummer Chad Smith. He got behind the drum kit and started a simple rock beat to which the crowd responded with more cheers. Then came guitarist Josh Klinghoffer, followed soon after by bassist Flea. The cheers rose in volume a little more: as far as bassists go, few are more instantly recognizable in rock music than Flea. Tonight his short, curly hair was dyed a light shade of purple. These two joined Chad in an improvised jam session. A minute later, singer Anthony Keidis took the stage and the crowd went wild. 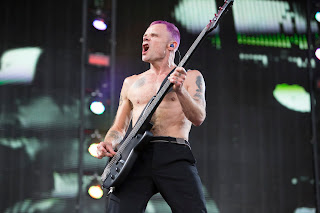 The band continued the open jam session for a few more measures before slipping into the melody for 'Monarchy of Roses' from their latest album I'm With You, and the show was off and rolling. They performed this song so tightly it could have been playing off the CD except the energy behind it was ten-fold. The crowd, likewise, was feeding off that energy and giving it back to the band. In the break before the next song, the band messed around with another improvised jam, capturing a slightly different mood, before again slipping into another well known hit of theirs, 'Dani California', from the Stadium Arcadium double-length album. Again, they were so in sync and feeding off of the crowd that I knew we were in for an awesome show.

For the next several songs they focused on playing some of their biggest hits from their last few albums, going  back as early as Californication, as well as playing a couple more of their brand new songs. A few of these were some of their more mellow songs, like 'Scar Tissue' and 'Snow ((Hey Oh))'. Even though they were packed pretty tightly together the crowd still managed to find the room to sway and dance to the Chili Peppers' funky grooves. The band also kept up the trend of inserting little mini-jam sessions between most of the songs. It was a clever way to keep the fans involved in the show and simultaneously on their toes about what song was coming next. 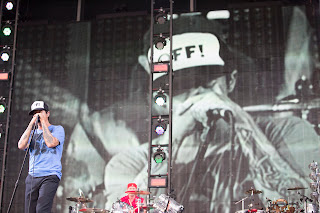 Before much longer the tones of Flea's bass guitar suddenly got heavier as he switched to his slapping technique. Then Klinghoffer's guitar came in with the heaviest riff of the night. They were playing their cover of Stevie Wonder's 'Higher Ground', one of the heavier songs in their repertoire. This snapped the crowd out of their mellow mood and got them jumping up and down again. Next the band slowed it right back down again with 'Hard to Concentrate'. In contrast to 'Higher Ground', this is one of the softest songs ever written by the Chili Peppers, with lyrics written by Keidis for his wife, creating a gentle love song. By far, though, my favorite song from the evening was 'Californication'. The minor-key tone of this song along with the clean guitar melodies and inventive lyrics about the excessive lifestyles of Hollywood culture mixed with social commentary make it a one-of-a-kind modern masterpiece of rock music. 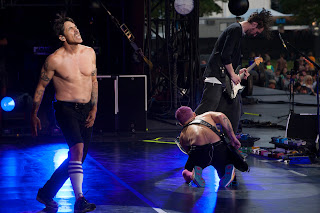 Sometime around the midpoint of the concert, Flea came up to the mic and began reading a poem. It was The Tyger by William Blake, and Flea took a moment to advocate reading, poetry and literacy. It was a great message to be heard from one of the world's most prominent rock bands. The crowd reflected silently for a moment on the words of the poem before the band went on with the show.

At one point during the show, Keidis paused between songs to point out and praise the sign language interpreter. There had been a signer on stage with various bands throughout the festival, signing to translate the lyrics of the songs, and just jamming air-guitar, drums or bass during instrumental parts of the music. It was a nice touch at a music festival that was heavily focused on diversity. Keidis looked over to the signer, asked, "Are you the signer? That was a very beautiful rendition. Thank you very much." 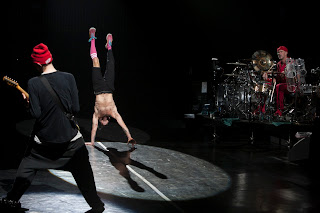 After the would-be closing number 'By The Way,' the band left the stage and it seemed the show was over. After a couple minutes, however, the crowd started to get restless. They were hoping for an encore, and cheers and chants started going around, growing in intensity as time wore on. Just when the intensity was on the verge of getting out of hand, the band members returned to the stage one by one. The most unique re-entrance had to go the Flea, hands-down, for he walked onto the stage doing a hand-stand!

Just as they did at the start of the show, they kicked the encore off with an improvised mini-jam that quickly morphed into 'Around the World' from the Californication album. Next they gave us another softer mellow number with 'Soul to Squeeze'. Then for the big send-off they closed with the funky hard-rocking 'Give It Away' form Blood Sugar Sex Magik.

It's easy to say that everyone had a thoroughly good time. Once the band left the stage and the house lights came on, the crowd headed to the exits with smiles on their faces in spite of the exhaustion they may have felt. All of this great music to absorb and still another full day to look forward to!

(Photo by Cambria Harkey)
The Red Hot Chili Peppers' set list was:
Monarchy of Roses
Dani California
Scar Tissue
Can't Stop
Look Around
Snow ((Hey Oh))
Adventures of Rain Dance Maggie
Higher Ground
Hard to Concentrate
Me and My Friends
Under the Bridge
Suck My Kiss
Ethiopia
Californication
By the Way
---------
Around the World
Soul to Squeeze
Give it Away