Post #251
The first day of Orion Music + More was perhaps the best day-long concert I had ever attended, and now the second day was upon me. I wondered if this day would somehow manage to top the previous day's events. There were several bands on this day's schedule I planned to see, but most promising of all was of course Metallica, headlining this final day of the fest with a 2 hour set. There was so much else to do at Orion Fest beyond just the music that I thought I would arrive early and look at some of the exhibits that had eluded me on day 1. 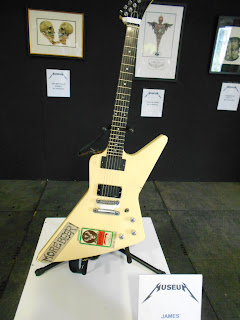 First and foremost was the Metallica Museum, a spectacular career-spanning collection of the band's own instruments, stage equipment and mementos from past tours. Immediately inside the museum to the right was one of Metallica frontman James Hetfield's guitars. It was a classic guitar that I remember seeing in many early Metallica videos like 'One' or 'Enter Sandman'. Other guitars belonging to guitarist Kirk Hammett and bassist Rob Trujillo were also on display. You could see that these instruments had a lot of miles of touring behind them; some had several nicks and scratches or hand-drawn graffiti on them. There were vintage tour posters, drum kits, and old back-stage passes. It was stuff that die-hard Metallica fans would 'oooh' and 'aaah' over- and they were! The one display you couldn't miss was of the late Cliff Burton's bass guitar. It was propped up in the center of the room- the place of honor. It seemed to radiate an aura of light. Everyone who gazed upon it did so with the utmost respect. One of the last things you saw before exiting the museum was the head of the Lady Justice statue used as a stage prop during the Damaged Justice Tour. It had signs of wear and tear from its numerous collapses as part of Metallica's famed 'Apocalyptic Stage' designs. I had seen one of Metallica's concert home-videos from that tour, and now I got to see that exact stage prop in real life.  I felt like I had come full-circle as a Metallica fan. 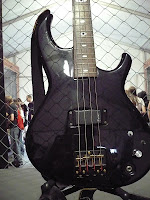 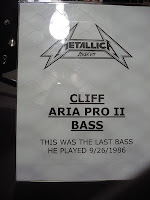 Following my tour of the museum, I headed over to the vintage and custom cars show on display in and around the next tent over. At the entrance to this tent was the Motorbreath Art Gallery, which featured a few cool atr pieces by 'Papa Het' himself. There were eye catching models, from vintage to modern to futuristic all over the place. I even got to sit in one of the custom dragster cars, mere minutes after Hetfield himself had sat in it. Hetfield had even signed the stainless steel interior next to the driver's seat. 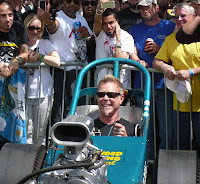 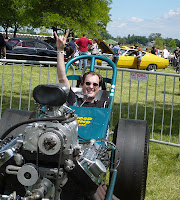 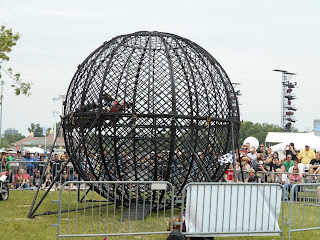 As 2 o'clock approached, I headed over to the Damage Inc. Stage where the first band on my itinerary, Cauldron, were about to go on. Cauldron are from Toronto, Canada, and play a very classic style of heavy metal that is strongly influenced by the early 'New Wave Of British Heavy Metal' era. They took the stage and gave the crowd a great show. Their guitarist Ian Chains was ripping some awesome guitar solos and the crowd really got into it. Singer/bassist Jason Decay and drummer Myles Deck held a tight and heavy rhythm section throughout the set. They played several of my favorite songs, like 'End of Time' and 'Nitebreaker', and closed with their popular number 'All or Nothing'. They have quickly become a new favorite band of mine, and I'll give a more detailed review on their performance in another blog post very soon. 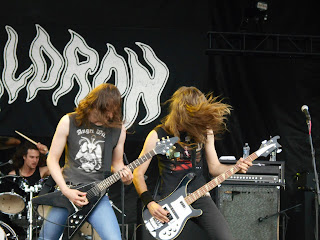 As soon as Cauldron finished, I hurried over to the Orion Stage to hear the last couple of songs by All Shall Perish, a death-metal band with strong thrash influences. Their music was very loud and intense. The crowd was moshing everywhere. I especially enjoyed their guitar soloing as it reminded me of some old-school thrash metal. Vocalist Eddie Hermida took a moment at the end of their set to express their gratitude toward Metallica for including them in the festival. Thankfulness and gratitude was a common theme throughout the festival; it seemed every band wanted to acknowledge Metallica for pulling Orion Music + More together, and rightly so- it was easily the most memorable music fest I had ever been to, and was getting better by the hour! 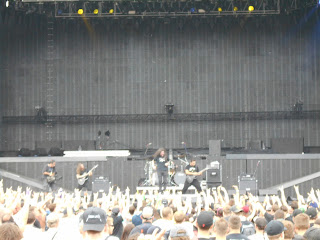 At this point I decided to check out the Sanitarium Stage where electronic dance music was featured. I am glad I did! It was such an all-encompassing experience. 12th Planet was DJ-ing, and the crowd under the tent was dancing like it was a night club. A smoke machine provided the medium to allow the intricate light show to pulse along with the beat of the music. The bass tones were powerful and heavy and enticed your body to move with the rhythm. Some people were even dancing with hula hoops. It was such a departure from much of the other music featured at Orion Fest, but somehow it still fit. The people were certainly enjoying it! 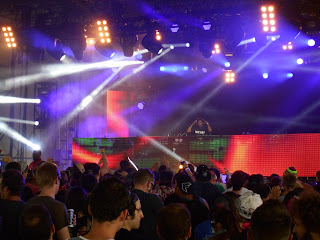 Later on, it was time for me to head back to the other side of the field, to see Vista Chino at the Frantic Stage. Vista Chino are a stoner-rock, or desert-rock, band. Their sound bears a strong similarity to the band Kyuss, of which 3 of the 4 musicians were former members. They played a heavy, mid-tempo style of hard rock or heavy metal. A good-sized crowd had gathered under the tent and were pumping their fists in the air. 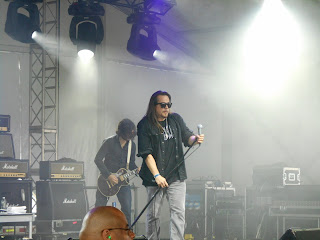 Once Vista Chino played their last song I quickly migrated over to the Fuel Stage to catch the second half of the Japandroids set. This band is a duo consisting of a drummer and guitarist who share the vocals. Though there were only the two of them, they packed enough energy for a full band. I had heard some of their music before but it did not compare with how they sounded live. This band was tearing it up! Though they are considered 'indie rock' or 'garage rock', some fans still thought they were intense enough to mosh to and so started mosh-pit in a section of the crowd. 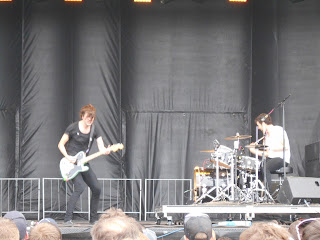 After Japandroids wrapped up their show, I walked a short distance to the next closest stage- the Damage Inc. Stage. Here I discovered Fu Manchu, another stoner-rock band. Though some elements of their music reminded me of Vista Chino, they were also noticeably faster. I stayed for the end of their set and heard some great songs. They did a cover of Blue Oyster Cult's 'Godzilla' that was remarkably true to the original. Their closing number was called 'King of the Road'- a good strong rhythm, heavy groove, and a tempo that built up in intensity toward the end. 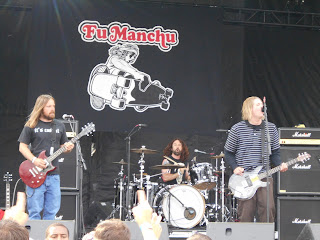 I headed back over to the main Orion Stage and caught the end of the Deftones' set. Vocalist Chino Moreno had a commanding stage presence, and kept the crowd active throughout the show. Their guitar riffs were heavy and energizing, never really letting up at any point of their show. The rhythms had a thrumming quality that invited widespread headbanging. It was an overall top notch metal performance, and the last act on this stage before Metallica. Before they finished, Moreno gave his own humble thanks to Metallica for choosing them as part of this festival. It was another moment of good character that had truly come to encapsulate the attitude of Orion Fest. Now there was merely an hour left until Metallica would take the stage themselves...

Everybody at this festival had been anticipating Metallica's 2 hour set for the entire weekend. True, there were a fair amount of people who managed to see them on the previous day when they appeared under the pseudonym 'dehaan', but now was their moment of glory, and everyone came crowding together as the last acts of all the other stages played their last songs.

The crowd packed in tighter and tighter together, and before long Metallica's intro started to play. For several years Metallica have traditionally started their concerts by playing Ennio Morricone's 'The Ecstasy of Gold' from the spaghetti western film The Good, The Bad, and The Ugly. The excitement among the audience was electric and the music only enhanced this emotion.

Then, finally, Metallica took the stage and began to play! They wasted no time hitting us all with some heavy stuff. 'Blackened' was their opening song- a progressive, heavy thrasher from their album ...And Justice for All. Their set list was amazing and diverse; they played a good mix of obscure deep tracks along with several crowd-pleasing favorites. All in all, it was truly a performance for the ages: a concert deserving of an in-depth review that I will be posting soon. Keep checking back for my next post about Metallica's Orion Music + More! 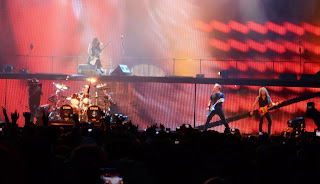