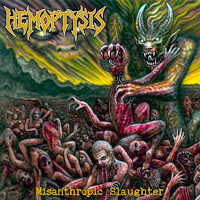 From the desolate plains of the Arizona desert come Hemoptysis, an independent death/thrash metal band with their full-length debut, 'Misanthropic Slaughter'. In early reviews they've been described as a fusion of death, thrash, and black metal, but if you ask them they simply call their style of metal 'Desertcore'. After hearing thier debut album, front to back, I might add 'melodic-death metal' or even 'Classic British metal' to the list of elements contained in their music. Either way, this band is poised to break down some walls between sub-genres of metal music.

The band's line-up for their debut: Masaki Murashita (rhythm and lead guitars & vocals), Ryan Miller (lead guitars, electric sitar), Travis Thune (drums), and Sunao Arai (bass guitar). Oh, and of course Vitis, the Demon of Corruption, or 'Temptor of the Holy', who graces the album cover as mascot.

Though I've honestly been hesitant to get into the 'death'-sub-genres of heavy metal, I must admit that Hemoptysis offer enough of a new take on it that I keep playing their CD in spite of my initial reservations. The vocal style is where Hemoptysis have people calling them 'death' (although their name & cover art probably help!), however it is the guitar-work that keeps me coming back for more; a furious hybrid of thrash-riffs and melodic, shredding guitar solos are present in almost every song. On top of the technical brilliance they display on guitar, drums & bass are black-metal style vocals that are more shrieked than growled. Maybe like Children of Bodom if you're looking for a comparisson, at least vocal-wise. Keep in mind, I'm not a regular listener of this sub-genre...

Misanthropic Slaughter is an album I would primarily categorize as thrash metal. The drumming is fast and technical, the guitar riffs are very heavy and construct strong melodies. The tempo varies from song-to-song, but is quite fast on the majority of the tracks. The guitar leads can shred pretty fast, but also display melodic passages up and down the fretboard, much like early metal pioneers like Iron Maiden. There are even a couple instances of clean guitars that set a meloncholic tone when implemented.

Overall, as I said before, it is the technically acomplished and diverse thrash guitar-work that I find raises this album's quality above the status-quo for a death-thrash crossover effort. It's also where I find satisfaction in the listening experience. But for those of you out there who genuinely appreciate death-metal, and appreciate when it incorporates melody & classic heavy metal, then you need to hear this band!

My personal recommendations from Misanthropic Slaughter:
-Misanthropic Slaughter (The title track kicks off this album with apt ferocity. Lyrics depicting graphic, and morbid varieties of murder & mayhem)
-Hopeless (Bass intro, great riffs, a clean guitar break-down segment that leads into a volley of guitar soloing between guitarists Ryan Miller & Masaki Murashita, capitulating with a barrage of blast-beat drumming, this song has a bit of everything!)
-M.O.D. (Lead guitar intro is classic shred! Reminds me a little of Iron Maiden's 'Wasted Years'. Then it turns into a total thrasher!)
-Impending Doom (Another classic-sounding riff that conjures recollections of Megadeth.)
-Shadow of Death (Another death/thrasher, with a bit of political themed lyrics. This song originally appeared on their EP, 'Who Needs a Shepherd', but is remixed here. They also have a video for it: http://www.youtube.com/watch?v=yKenWvu4sm8)
-Hadephobia (Clean intro gives this tune an ominous tone... before describing the nightmarish threat of being sent to Hades...)
-End of Sorrow (My absolute favorite song on this album! Again, features a clean-guitar intro, but more intricate than most of the other songs. Some keyboards can be heard in the background, and of course, killer guitar solos that exhibit masterful melodic themes.)

Misanthropic Slaughter is set to be released on March 8th, 2011.
You can pre-order the CD on the band's official website. Check it out for more info, merchandise, upcoming shows, etc...
http://www.hemoptysismetal.com/
Posted by headbanger_71369 at 8:36 PM