Dame Nation has developed a reputation for gathering the best independent, local talent when it comes to female-fronted rock and metal bands. This year that reputation stands to grow even further, drawing a few out-of-state performers. Other bands appearing include: Avariel (from Boston, MA), The Unvoiced (from Montreal, Canada), Angelical Tears (from Oklahoma City, OK), A Sound of Thunder (from Washington D.C.), Lindz Riot of Mary and the Black Lamb (from Ontario, Canada), along with Shield of Wings, and Solarsphere (both from Chicago).

It all starts at 5pm on Friday the 29th - less than a week away! Click the image below for more information and how to get your tickets! 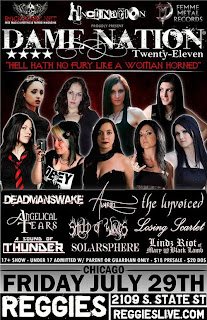