The theme for polls this past summer and fall has been the 90's. While most of these polls have focused on the trend the rose in popularity during that decade-Grunge, this post allows me to focus on one of the trends that faded during the 90's: Hair Metal. Within the Hair Metal scene, Warrant were already late-comers, with their debut album being released in January '89. By '93 the Hair bands were, by and large, struggling to maintain their platinum-selling status.

With the recent passing of Jani Lane, the founding front-man of Hair-Metal legends Warrant, I took the time to reminisce on some of my favorite tracks in post # 156 on August 19th. Soon after, I posted the poll asking your opinion for favorite Warrant album. The resounding answer was Cherry Pie. 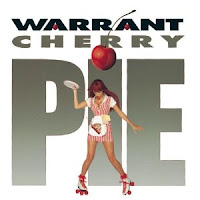 Cherry Pie, Warrant's second release, may have had perfect timing, hitting the charts in 1990. The album is still well known for its title-track, a song that has been typified as stereotypical, cliche Hair Metal. Lyrically the  song is virtually 100% innuendo, but the heavy, pop-rock tune has a catchy chorus that is difficult to forget. If you take the time to look past this over-inflated, trade-mark title track, you will discover the true greatness of this album. The other singles it produced; 'I Saw Red', 'Uncle Tom's Cabin', and 'Blind Faith' each give more merit to this album's solid songwriting.

'Uncle Tom's Cabin' in particular shows the versatile side of Warrant. Beginning with an acoustic intro, adding a banjo to the melody, and changing tone a few times throughout as the guitars flip between electric and acoustic, this song gives you just about everything Warrant is capable of. However, what truly makes this song memorable is the narrative style of the lyrics. The song tells the story of a corrupt sheriff and deputy who dispose of a dead body in a swamp. The narrator, who observes the event along with 'Uncle Tom', portrays the weight of this circumstance quite well.

If you want to rediscover Warrant's Cherry Pie album, here are my top recommended songs:
-Cherry Pie
-Uncle Tom's Cabin
-Sure Feels Good to Me
-Mr. Rainmaker
-Train, Train (Blackfoot cover)
Posted by headbanger_71369 at 5:05 AM