None The Wiser: 2 Years of Sutured Psyche!

Post #215
On January 28th, 2012, Sutured Psyche returned to the Elbo Room, in Chicago's Lincoln Park neighborhood to celebrate their 2 year anniversary as a band... This show was a special occasion as they chose to invite their fans to bring their own video-recording devices to film the show for a DVD. I took advantage of this opportunity, and filmed my own video that I contributed to their archive for this project. As luck would have it, I was one of very few who managed to capture the full show before running out of storage space or batteries (I barely made it on battery life!)

To be sure, film or no film, Sutured Psyche put on an excellent show! They knew tonight was their night and played with as much fervor as ever... 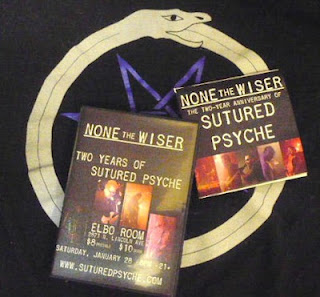 The show was typical balls-to-the-wall energy on display for Sutured Psyche. Their regular following has probably grown accustomed to their style of play over the last 2 years, but for the occasional new member of the audience catching their show for the first time, it's sure to win some new converts to Bastard Nation (the band's pet-name for their faithful following.) Those in the front row were likely to receive a sprinkling of hard fought sweat from cheesecake (...er, I mean guitarist!), Ryan Reilly.

The band delivered a great set, featuring several songs from their 6-track EP Bastard Nation, some older original songs of theirs, and a couple newer ones. They even pulled out a cover of 'I Ran' by 80's pop-rockers Flock of Seagulls. The crowd loved every minute of it. By the end of the night, footage had been saved on several hand-held electronic devices, and arrangements were made to get them to the band.

True to his word, band spokesman/guitarist Ryan Reilly gathered all the contributed video clips of the show, and mixed them with the master audio from the show, and has delivered a Live DVD/CD combo pack that is available to all their fans and Bastard Nation at large. It is a really sweet package, too! Not only does it contain a DVD of the full concert, and an audio CD of the set, but Ryan went the extra mile and threw in a ton of extra features. (one might say he ran... he ran all night and day... etc...)

The first treat is the opening track: an animated video of their song 'The Leap' (quite appreciated by die-hard fans, as this song was not performed as part of the live show!). Following the concert footage, there are some documentary-style Bastard-Grams. These were the band's special way of promoting the release of their EP, as they hand-delivered them, along with a message, upon request for any number of occasions.

Some highlights from the show itself:
Crecy. The opening number features an extended bass-guitar intro. Great tone-setter as the band eases into their groove.

Belbo's Stomp. This song sees Sutured Psyche get some of their aggression out. Band members are jumping around the stage, playing off each other's energy. Some of the fans get into the spirit too, as some creative camerawork comes into play. At one point during this song, the camera slowly inverts, so that it seems Dr. Piamon is screaming at you from the ceiling!

Steven. As Adrian Mann joins the band midway through the show, initially disguised as 'Dirk Dastardly'. Immediately before the song starts he says to the audience: "My Brothers, let us play the music of our people." All things considered, this moment seems to sum up the crux of Sutured Psyche and their beloved Bastard Nation... A camaraderie shared through the emotion of the music and lyrics of this band. You feel that Sutured Psyche has a tribal quality to it, and you feel a part of that tribe. The song they proceeded to play was 'Steven', a fan-favorite and one of the band's best known songs. It is a melodic number at the start, and cycles between heavy segments and melodic phrases throughout. The memorable, Shakespearean line of the chorus: 'I demand... I demand my pound of flesh from you.'

Codependent. This song has remained a 'classic' in the eyes of fans. A demo of it was made in the band's early days, but it didn't make the cut for inclusion on their EP (to the dismay of some fans). Well, there is some redemption for it now, since there is now this live version of the song. The band really delivers on this number, perhaps the best performance of the night!

I Ran. The Flock of Seagulls cover. The crowd reaction to this one says it all. Just watch the DVD, or listen to the CD. This was all of Bastard Nation letting loose and havin' a good time! William breaks into an ad-lib salutation to the audience and their faithful support towards the end.

Check out www.suturedpsyche.com today, and get your copy!

Complete Set List from the show is as follows:
-Crecy
-Invocation
-Anything
-Ma Gavte La Nata
-Belbo's Stomp
-Steven
-Codependent
-I Ran
-Trickster, Part 1
Posted by headbanger_71369 at 1:54 AM