Proudest Angel-The Soundtrack to Your Next Bad Decision (2016)

Proudest Angel had been broken up for over a decade before the paths of former members would meander back together and bring some new faces into the fold. Enter 2016, and a reunion of sorts for this underground heavy rock band has commenced. This time around, who knows where it will go, but so far they already have a collection of new recordings in the books: The Soundtrack to Your Next Bad Decision. 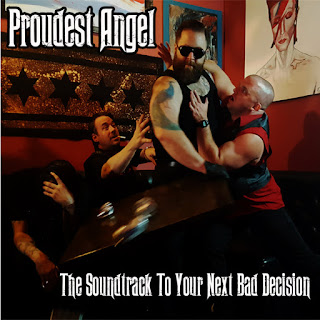 Their style is a raw and heavy, riff-driven fusion of alt-rock and metal. Vocalist Bill Paimon was previously in Sutured Psyche, another band I've reviewed on this blog before. His vocal style remains consistent from that band to this, but the instrumentation and direction of the band is heavier. For all intents and purposes it is fair to think of Proudest Angel as a 'heavier Sutured Psyche', for those familiar with them. However, Proudest Angel's original iteration predates Sutured Psyche's. Their early recordings can be found on their CD, Skeletons From the Closet. I may review those songs later on, but now is a time to focus on their new recording.

With The Soundtrack To Your Next Bad Decision you get a good sampling of what Proudest Angel have to offer. For those who know them from their early days, the sounds are familiar. They primarily deliver some heavy riffs in a mid-tempo song structure. They do include a couple songs (Anathema, Canto Dolor) with melodic clean guitars, or slower tempos, but they always come back to the faster heavier formula in the end. They even have an unusual choice of a cover song; Lady Gaga's 'I Like It Rough'.

The Soundtrack To Your Next Bad Decision should be enough to remind the old fans of what Proudest Angel were, as well as showing them what they have now become. As they continue to play shows in the Chicagoland area and write new songs it will be interesting to see where they go from here.

Track Listing:
Civilly Feral- This one is their first single, and music video, in support of this release. A groove-heavy headbangin' tune.

Starlight- One of my favorite tracks. Fast, heavy, and they mix things up with a cool breakdown segment.

Anathema-Although still electric and heavy, this song had melodic riffs that show off Proudest Angel's versatile side. Long-time fans may be reminded of their song 'Wayfaring Stranger'...

Shoulda Known Better-This one is a straight-up rock and roller of a song!

Canto Dolor-This one is closer to a true ballad than Proudest Angel have come before. Clean guitars, and slower tempos let you know this band has a little more to offer...

I Like It Rough (Lady Gaga cover)-Here they take Gaga's pop-song and reinvent it with a heavy metal palate. The fact that it is sung by a guy make all the lyrical innuendo more curious...

We Had Fun-This one is a slower-tempo grinder of a track for the most part but  there is a point about 3 minutes in where they skip over to a double-time feel.

This release is also available at:
Amazon
iTunes