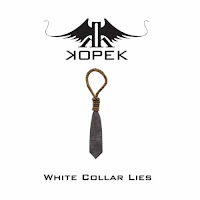 Kopek are poised to hit the mainstream rock-music market with riffs, melodies and attitudes reminiscent of the roots of hard rock. A 3-piece band from Dublin, Ireland, inspired by classic artists like the Rolling Stones and Led Zeppelin, Kopek are out to show the world that they have what it takes to succeed in the music business. More than that, if the collection of songs on their debut album, White Collar Lies, is any indication of what they're capable of, they'll be around for quite some time!

They may be young, but that hasn't stopped them from winning their fair share of contests- including the Global Battle of the Bands (gbob.com). Maybe it's the luck of the Irish, but I'm betting there's something more tangible behind their rise to success. Songs like 'Love is Dead', their debut single, rock out with socially conscious lyrics and grab the listener with thought provoking messages. They have a cool video for it too: http://www.youtube.com/watch?v=Qr3D0bYrcZY. Other songs, like the title track, 'White Collar Lies', take a more melodic and soft approach with the music, while the lyrics seem to provide sharper, straight forward criticism of current events.

So many aspects of this album really brought me back and reminded me why I came to love hard rock music in the first place. It is that intangible essence of good rock music that Kopek have tapped into. They seem to have the right frame of mind to hold true to their ideals, both musically and lyrically. Even more important, they have the talent to deliver these aspects efficiently on their debut album.

Singer Daniel Jordan has the type of scratchy voice that is a perfect fit for an edgy hard-rock band. At times he reminds me of Buckcherry's singer, Josh Todd, while other times he seems more like a Jack White (of The White Stripes). In spite of these similarities, Kopek have plenty of unique elements that make them worth checking out.

Here are my picks:
Cocaine Chest Pains (A great hard-rockin' tune, gets the album off to a great start!)
White Collar Lies (The title track is a softer number, but the sharp criticism of government policies and corruption makes it one of the most memorable songs on the album)
Love Is Dead (Simple lyrical format, but thought provoking in a nearly ingenious way)
Floridian (A genuine ballad. Kopek display another side of their talent on this one)
Bring it on Home (This is the song that made me draw some comparisons to The White Stripes)
[WHITE COLLAR LIES is due for release in MARCH 1st, 2011]
Posted by headbanger_71369 at 2:05 AM