Post #164
Eliminator are an independent metal band out of New Jersey. When I first heard about them through another heavy metal music blog I follow, I thought, 'OK, here's another one out of countless black/death metal bands. What could it hurt to check 'em out?' In this case, I was glad I did. I downloaded their debut album Breaking the Wheel, and gave it an honest listen. The first thing that impressed me about the sound on this album was how they seem to hearken back to the early days of thrash and speed metal, rather than just grinding out riffs. I found enough intricacies in their guitar work to hold my interest.

Then I was further impressed by their song structures, which often incorporated significant break-down segments, where clean guitars were used in minor keys to enhance the dark, ominous tone and mood of the music. After further exploration of their music through their myspace page, I also discovered they have really begun to smash boundaries of their genre with their more recent works. Believe me, I don't use that term lightly. You really must hear it for yourself. But that's a story for another post... 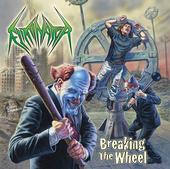 For now, I am going to focus on Breaking the Wheel. This album bludgeoned my skull in ways it hasn't been abused since the days of early-era Sepultura. The guitar tones truly capture that early thrash-era tone. The drums fill a wall-o-sound with decadent blast-beats that challenge the upper limits of tempo. Warchild's vocals are demonic screams and shrieks, though he sometimes will drop into deeper tones that remind me of classic Slayer vocals.

Though it only contains 7 tracks, a couple of them are pretty long, making for a quality headbanging experience for about 40 minutes. The best ones I can easily recommend:
-World Obliteration (Eerie, old-school woman's voice begins your listening experience as she promises you 'Everthing is fine in Heaven...' Drums come into the mix, and after a few seconds kick into double-time. Just when you think Eliminator are ready to start thrashing out, you hear the drums double in tempo once again as the guitars come in at a break-neck pace!)
-Breaking the Wheel (The title track is my favorite on this collection. The song's most redeeming quality is found with the multi-tiered breakdown section about half-way through. The lyrics convey a message of fighting against cancer.)
-Prescription for Extinction (Closing number brings more speed-black metal riffage, but closes on an extended melodic break-down. Clocks in at over 8 minutes as the longest track on the album.)

To check out this album, and more of Eliminator's music visit their myspace page!
Posted by headbanger_71369 at 12:58 AM