Post #163 [Poll Winner: Favorite Iced Earth album from the 90's]
Iced Earth released their debut album in 1990, and quietly built a strong underground following throughout the decade. By 1998, they had become one of the biggest names in American power metal. Something Wicked This Way Comes, their 5th album, saw the band touring more extensively than ever. The strength of fan support for this album also led to the recording of Iced Earth's first live album, Alive in Athens. Your votes last month for your favorite Iced Earth album of the 90's further confirms the significance of this release. 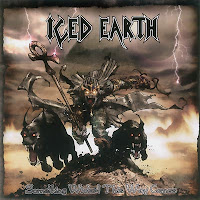 Something Wicked This Way Comes displays Iced Earth at one of the high-points of their career. Having established Matt Barlow as the band's main-stay lead singer, the band's stability was also at a peak. This album has several tracks that are now Iced Earth classics, as evidenced by their inclusion in both the Alive in Athens live album and their 2-disc compilation The Blessed and The Damned.

Something Wicked This Way Comes is a well balanced thrash/power metal album, incorporating a variety of melodic guitar parts with Iced Earth's traditional speed-metal riffs. Matt Barlow's vocals are as strong as ever, as he displays his vocal range with mastery throughout this album. Jon Schaffer's songwriting and guitar playing are also above the standard the band had shown by this stage of their career. All in all, this is perhaps the best album Iced Earth have recorded. It certainly got your vote for the best album from this band in the 90's!

Though I have touched on this album before, I still have tracks to recommend, some repeats, some new:
-Burning Times (probably the best known Iced Earth song, a true classic!)
-Melancholy (Holy Martyr) (still a personal favorite of mine...)
-Stand Alone (this one has an anthem-like vibe in the chorus)
-Reaping Stone (a slow-tempo number, with plenty of dark-toned clean guitars mixed with heavy chord progressions)
-Something Wicked (trilogy); I: Prophecy, II: Birth of the Wicked, III: The Coming Curse (an epic 3-part concept suite depicting mankind's corruption, and the possible coming of the Antichrist... As intricate as these tracks are, Schaffer & company would return to this concept years later as the inspiration for a double-length concept album, but it began right here...)
Posted by headbanger_71369 at 11:00 PM